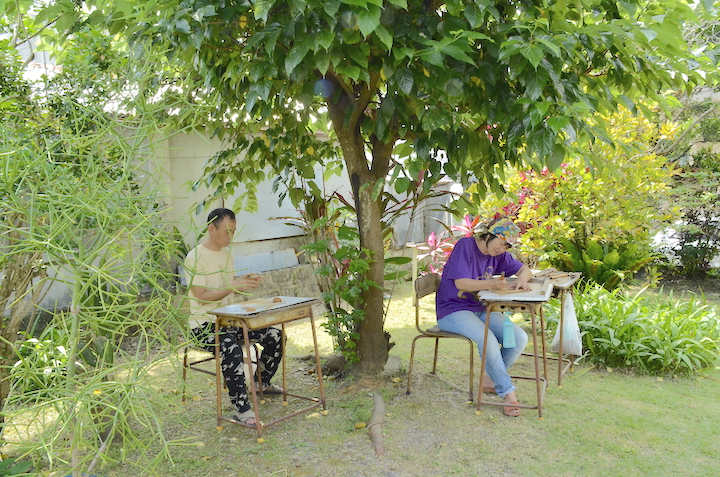 On one day in early summer with a clear blue sky and fresh air, I visited a workshop in central Okinawa Island where two artists were hard at work.
One was carving while the other was pounding clay under a tree that provided shade from the dazzling sun in this breezy spot. 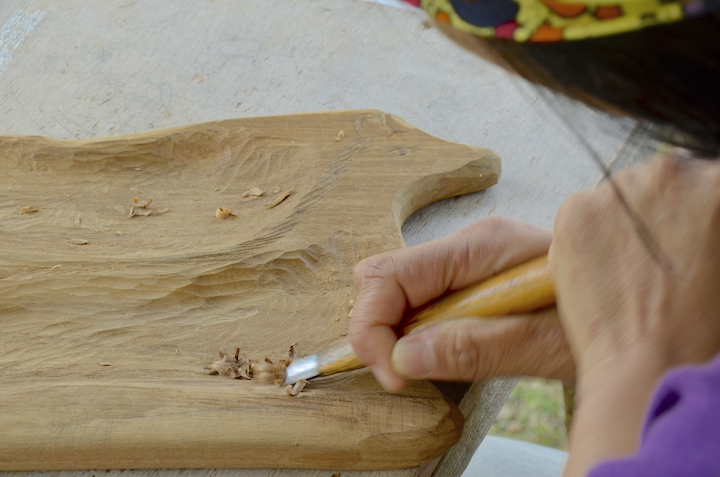 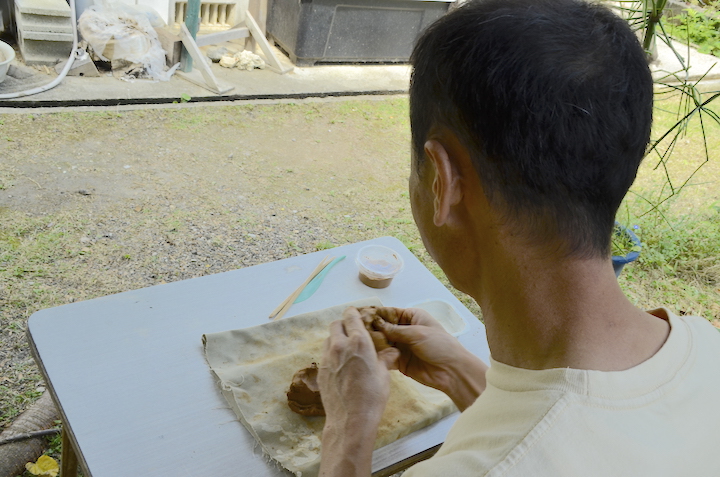 Artists, Izumi Okayama and Toshikage Yoshida work with childlike freedom that infuses their creative, powerful works that sense body heat. The unique style seems to resemble characters out of the manga magazine “Garo,” and stimulates fascination in all who view these pieces regardless of age or gender. 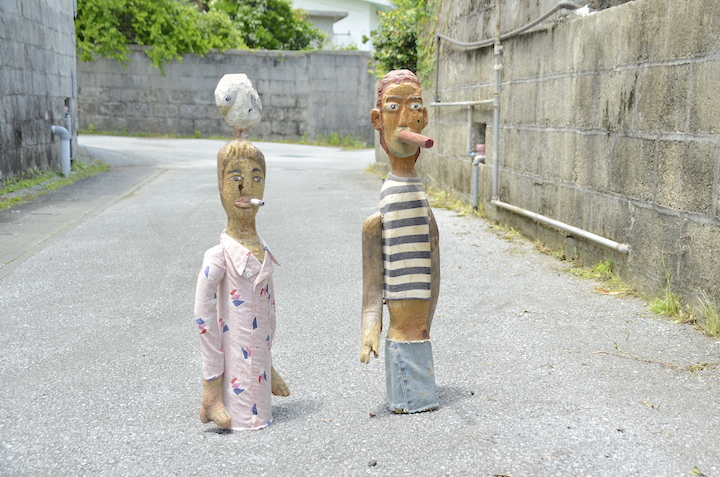 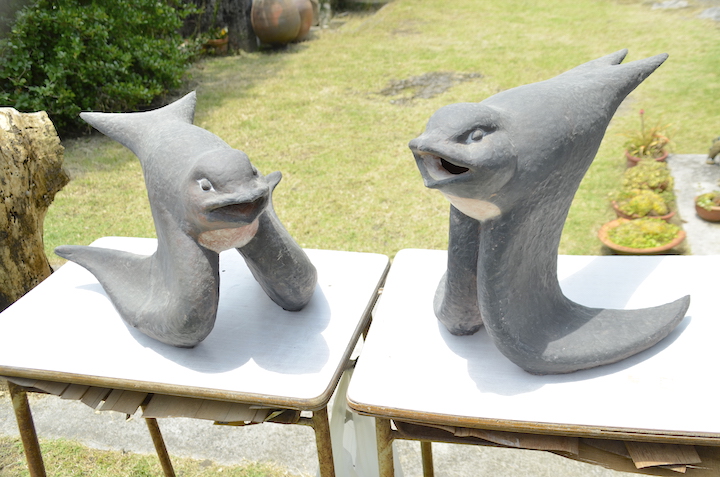 The pair lives in a single-story flat that was made from concrete in the 70's or 80's in Okinawa. Their atelier is in the shade of a mulberry tree in the garden.
“Of course,” said Yoshida. “I can't say I have the biggest atelier in the world.”
But, he considers no ceiling or floor and so separate their existence, the surrounding walls, the atelier the size of the Earth. 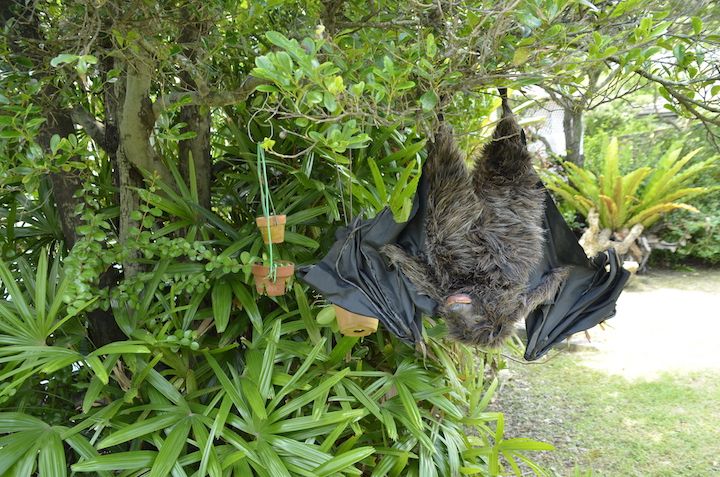 When they are at work in this place, various sights and sounds of nature and living things come into view.
For example, the notes from a neighbor’s piano carried in by the wind, or a bat gliding on the twilight air to hang from a branch of garden tree. Small fragments of life become the artistic motifs of Okayama and Yoshida's art and often appear in their works. 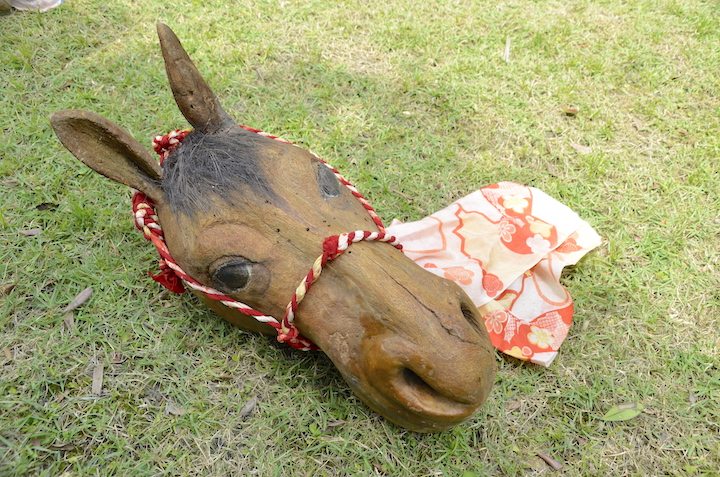 One such motif that appears often in Okayama's works is the goat. Goats were once the most prevalent livestock kept in Okinawa. Although the numbers have decreased in people's homes, the designs still remain a symbol of sustenance and familiarity.
Goats are still popular to keep for pets or as livestock. 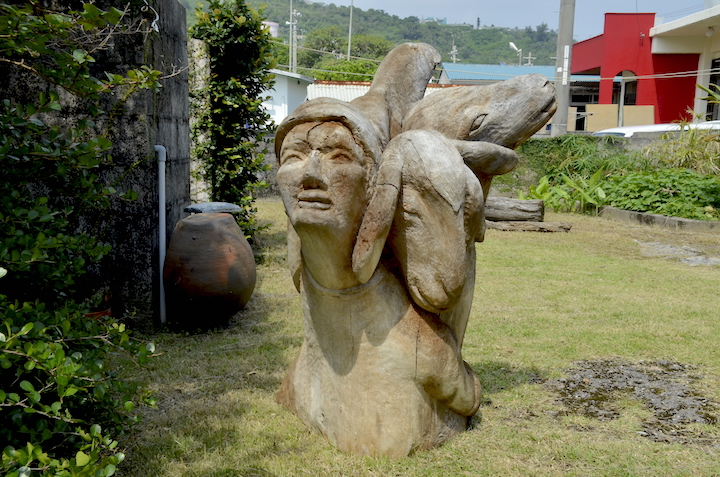 Okayama is one of those people who loves goats. He enjoys spending time with one older neighborhood man and his goats. During leisure time, when she is out sketching, she looks forward to meeting the elder gentleman and chatting. The old man, from whom she occasionally buys vegetables, seems to keep his goats as cute pets rather than as livestock. 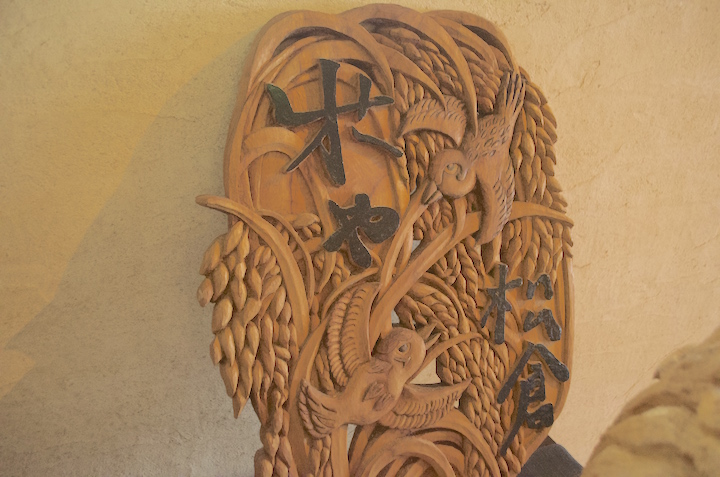 In addition to sculptures, other pieces coming out of their shop include, cutlery, dishes, tee shirts,
Badges and decorations are some examples. Shop signs they've made may be found in places such as Yomitan Village bakery Suien, Ginowan City restaurant Matsukura. 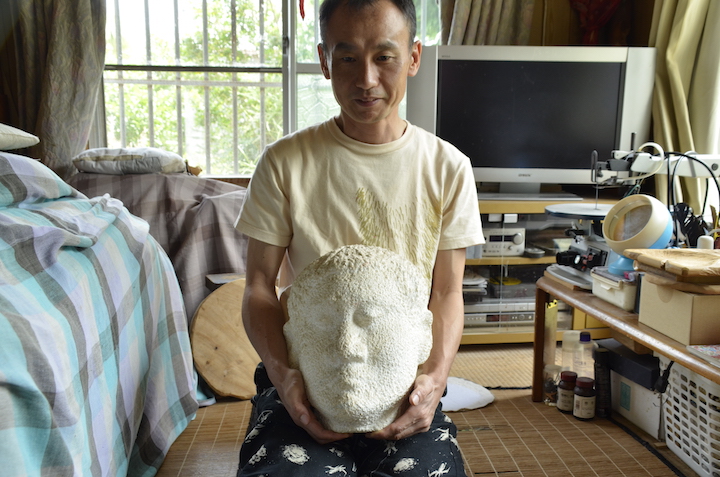 “It is not easy to make a living as a sculptor.”
Both artists came out of the Graduate School of Art in Okinawa but had to make a living through various part time jobs while setting aside time to create their own artwork. Or course, hard work was fundamental to their career together, but so were the skills and connections they developed through work they did on projects such as the restoration of Shuri Castle and excavation of the castle ruins at Nakagusuku Village. 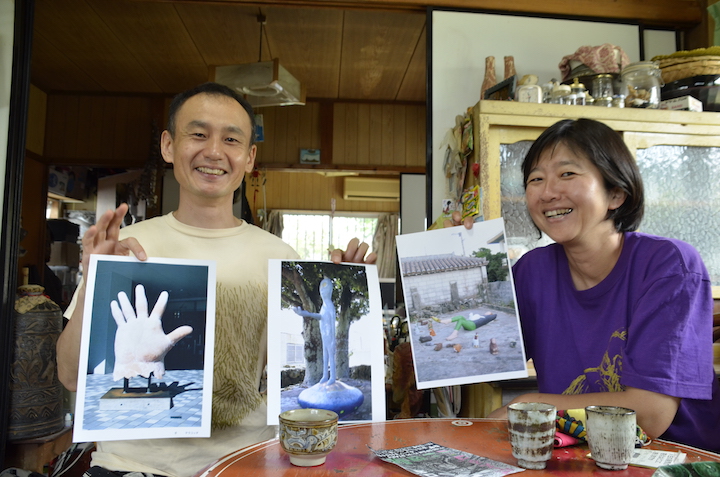 Once, a local customer came to ask if we would carve a dragon sculpture for display at the Kitanakagusuku Village Community Center.
“We’re so glad to get these kinds of orders even though we are ‘naicha (from outside the prefecture),” said Okayama. “The dragon took us eight years to complete but as a result of that job at the center we made a connection with the local community a little at a time.” 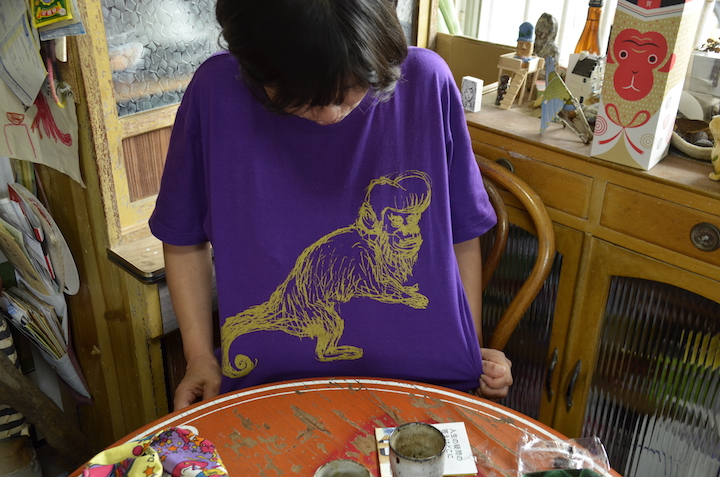 Some locals encouraged their work by saying “good job” or “how about some tea?” An old man used to bring vegetables or lunch sometimes. An elderly lady spoke about her grandchildren and told stories. A man who used to be a carpenter visited often to watch the work out of professional curiosity. An elementary school boy was shy and just watched at first, but gradually became very talkative.
When the work was finally completed, some of the older folks who had been following the progress saying, ‘I wonder what kind of dragon will this be?” departed this life for gusoo (the next world in the Okinawan dialect) before its completion. Kids who were in elementary school at the start were in high school when it was finished. 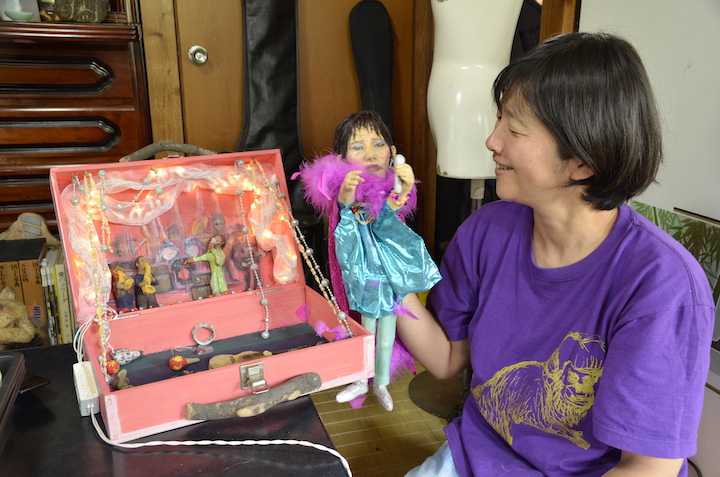 A while after the dragon project was started, there was talk about a monument for the local elementary school as well. While working on that, the children at the school modeled various poses and contributed much to the project.
“Through building those monuments,” Yoshida said. “Not only were we able to introduce the students to the process of sculpting but we also realized again that art is very powerful.” Okayama and Yoshida reflect. Some of the kids who were involved in the project now aim to be sculptors. 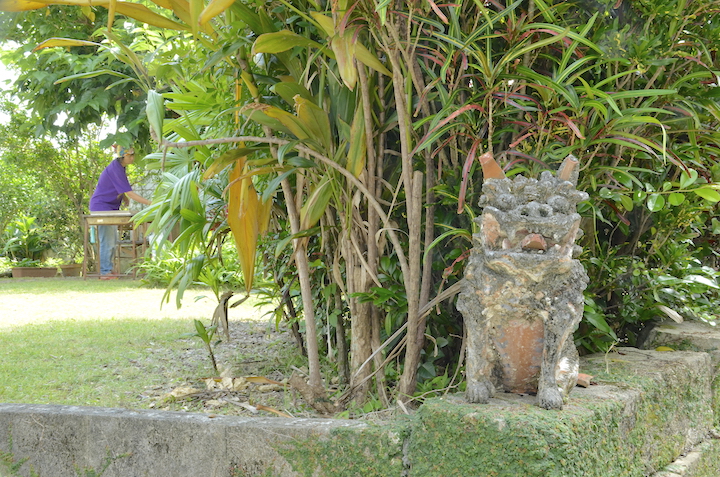 The relationships that they’ve been building through such things as dragon sculptures and monuments still continue, of course. As do the experiences to be gained from daily life. While taking in the influences of Okinawa, these two artists continue to infuse their works with a spirit that warms the hearts of all who are touched by it.
Art Unit Yotaro
Address Nakagami-gun, Kintankagusuku Village, Okinawa
Okinawa CLIP photo writer: Noriya Fukuda 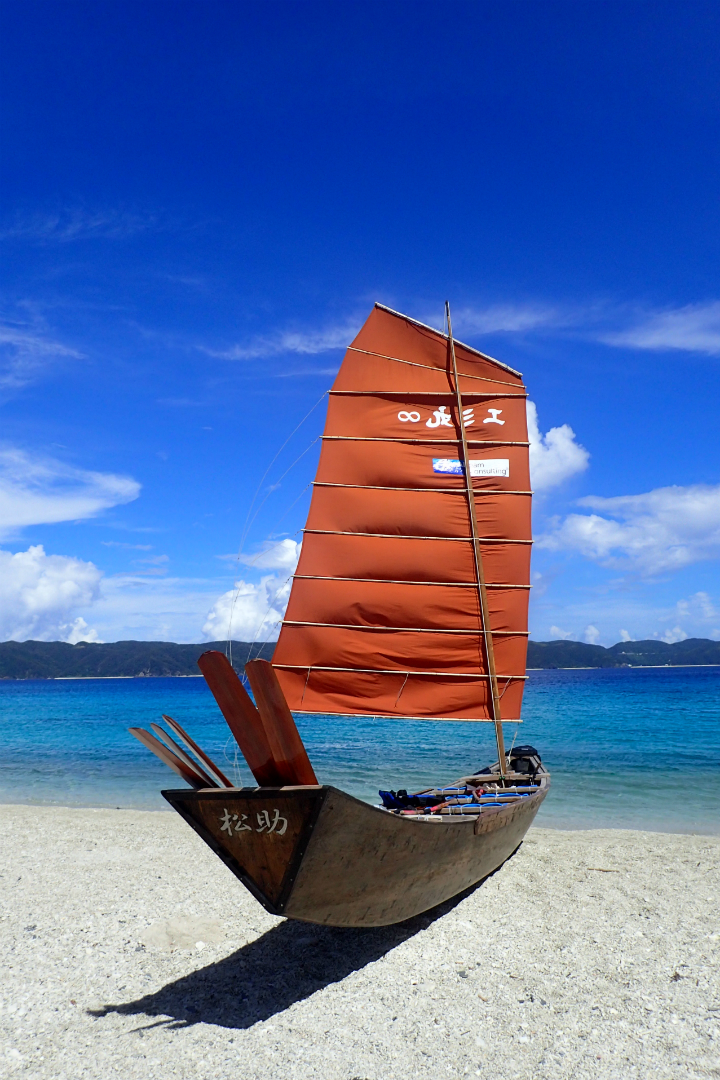 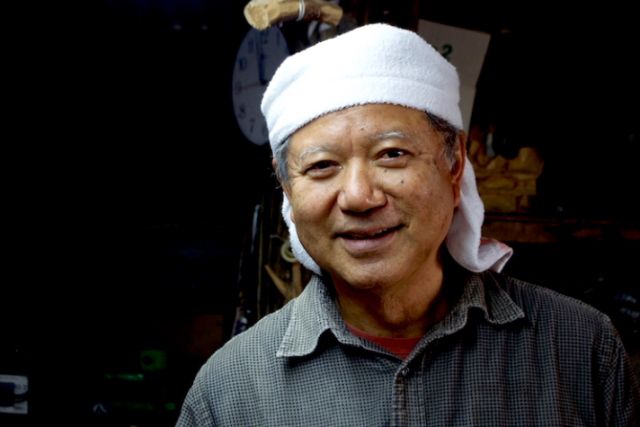 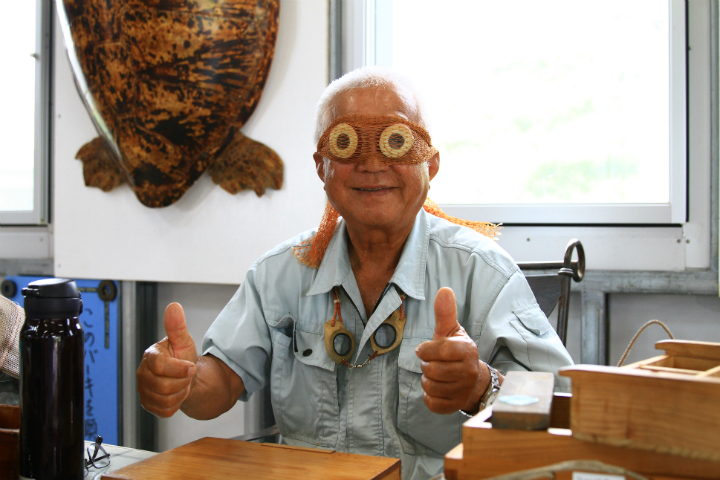 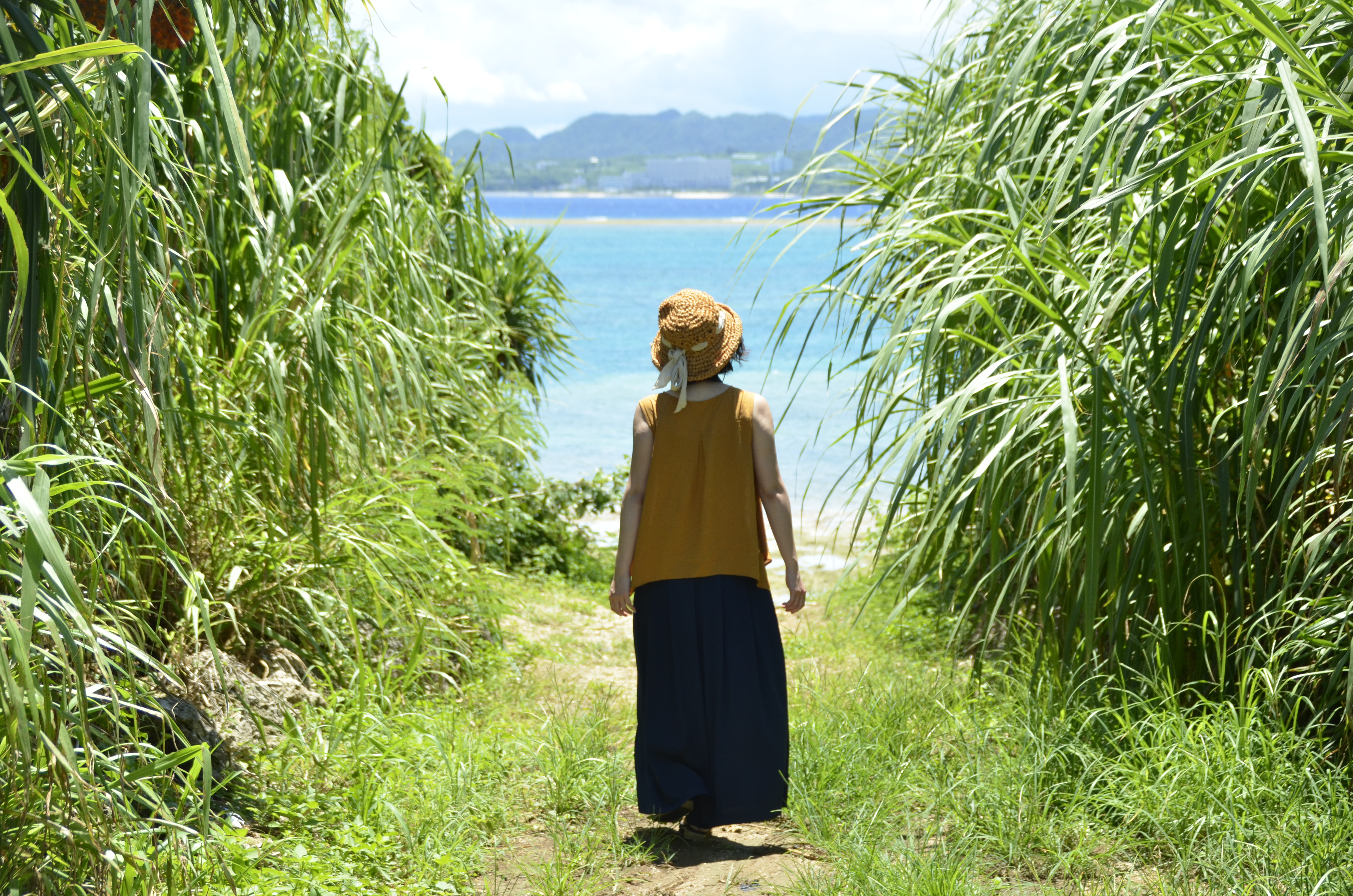 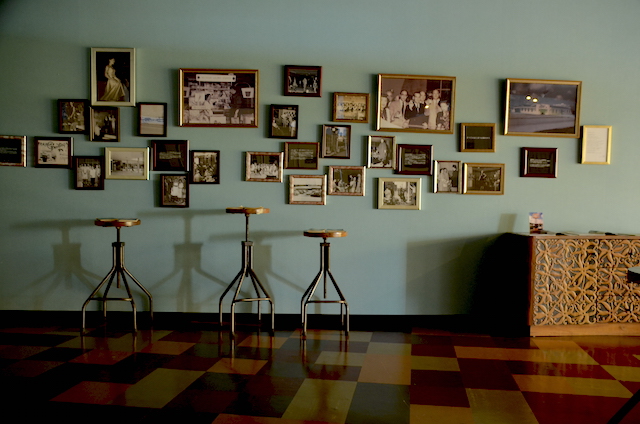