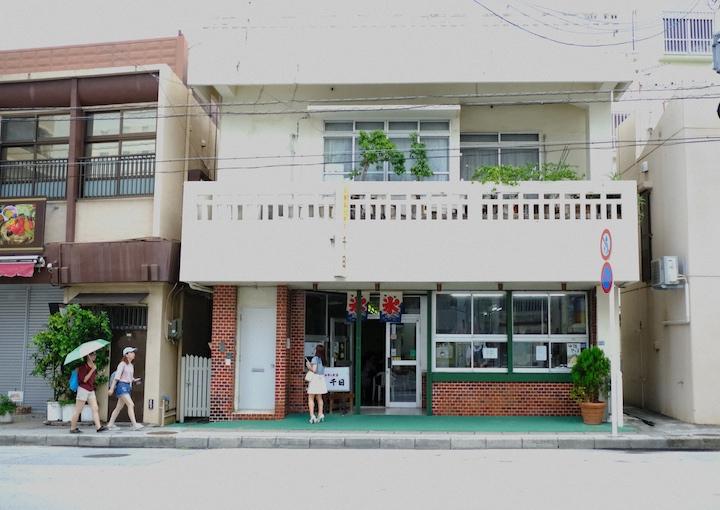 Only eight minutes away on foot from Naminoue Beach, a popular spot with the locals and the closest beach from the downtown core of Okinawa, is Sennichi. In the past, this shop was full of beachgoers, and inside the shop are melancholic remains from the days gone by. The shop is a well-known and long-established shop that serves Zenzai, an icy treat beloved by the locals. The original owner, Mr. Shingoro Kinjo, moved to Naha from Okuma in the northern village of Kunigami with his wife Haruko and opened an eatery here named Yabune Shokudo. They opened the shop in 1952 and in those days, used an American-made ice shaver that was manually operated. 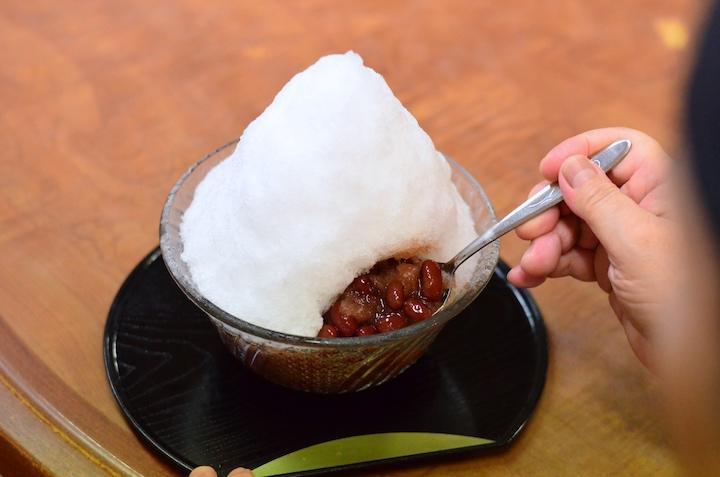 Okinawa’s Zenzai is served cold, and underneath the triangle of shaved ice awaits the sweet red kidney beans. This local favorite is said to have been born in the 50s or 60s, and its origins are unknown. What is known, though, is that Sennichi’s shaved ice was already recorded in photos in the late 60s. 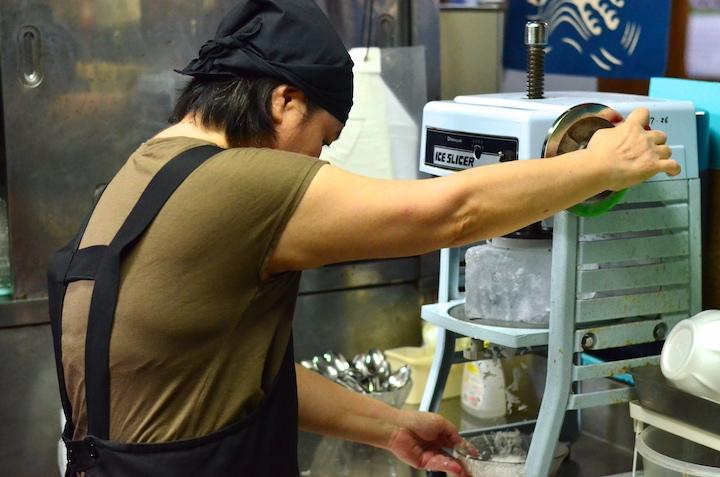 The sweetly cooked red kidney beans and the ice so fluffy and white like fresh snow. The shaved ice has a gentle and smooth texture. “The shaved ice becomes very different depending on the ice and the machine used. If it’s too light, it doesn’t create the nice length, and when it’s too heavy, it doesn’t have a good texture. The blade on the machine also makes a difference. It’s hard to get the same results as the original,” says Reiko, who plays a central role in running the shop. 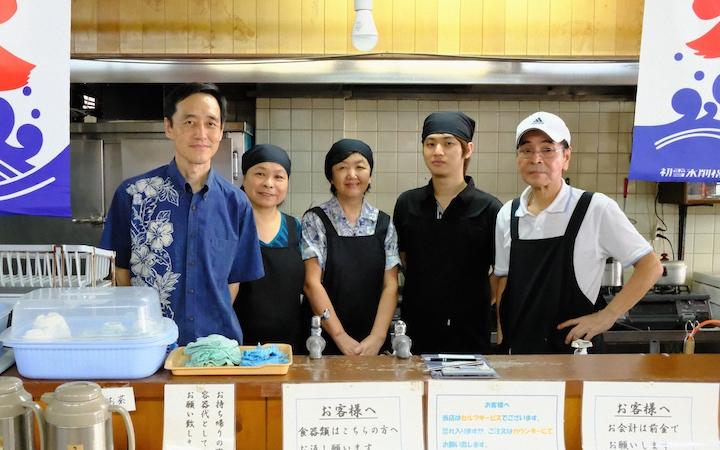 Reiko is the third daughter of the original shop master, who left the recipe to the famous dish that put Sennichi on the Zenzai map. Reiko, her husband, her brother, who’s the second son of the family, and his wife, and her son run the shop together now. The five of them offer the same Zenzai that was passed on to them from the original shop master, and also Taiyaki and Imagawa-yaki.

Unlike the regular red beans, the red kidney beans tend to have a more fragile skin which easily peels off. So once they are lightly washed, the beans are placed in a pressure cooker and once it comes to a boil, it simmers on low heat for approximately two hours, taking plenty of time to gently cook them. After this step, the beans are taken off the heat and sugar is added before returning it on to the heat for another four hours. It’s almost finished, but not quite yet. Once the beans settle, they are left for a day for the flavor to sink in. “The beans are best when they’re left for a day and a half or two days, but there are so many customers everyday, especially in the summer, and our pots aren’t very big so we can’t keep up,” says Reiko. 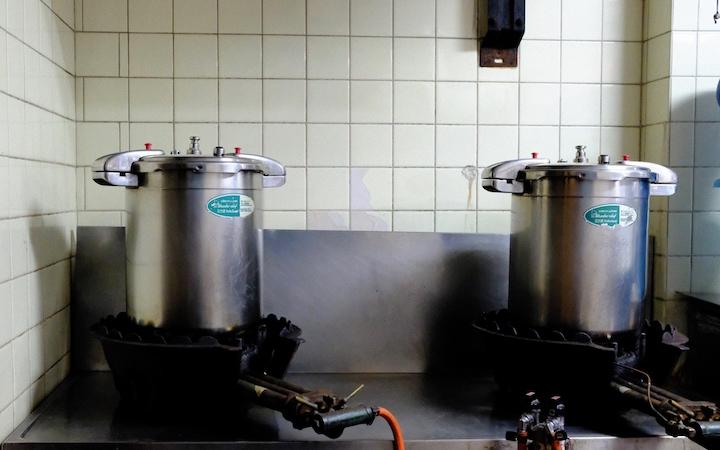 I arrived at the shop at 3PM, the time they designated saying that’s when they’re the least busy. Before I knew it, the tables started filling up with customers who perhaps, stopped by for their afternoon snack. Even during this rush of customers, Reiko took the time to talk with me as she carefully looked on to the customers to make sure they were all happy. “My father was very methodical, taking notes and writing down everything. How long to cook the beans, how much sugar to mix in to get the right amount of sweetness. We just follow his recipe so we have it easy, I think. My father, he probably went through tough times with a lot of trial and error,” Reiko explains. 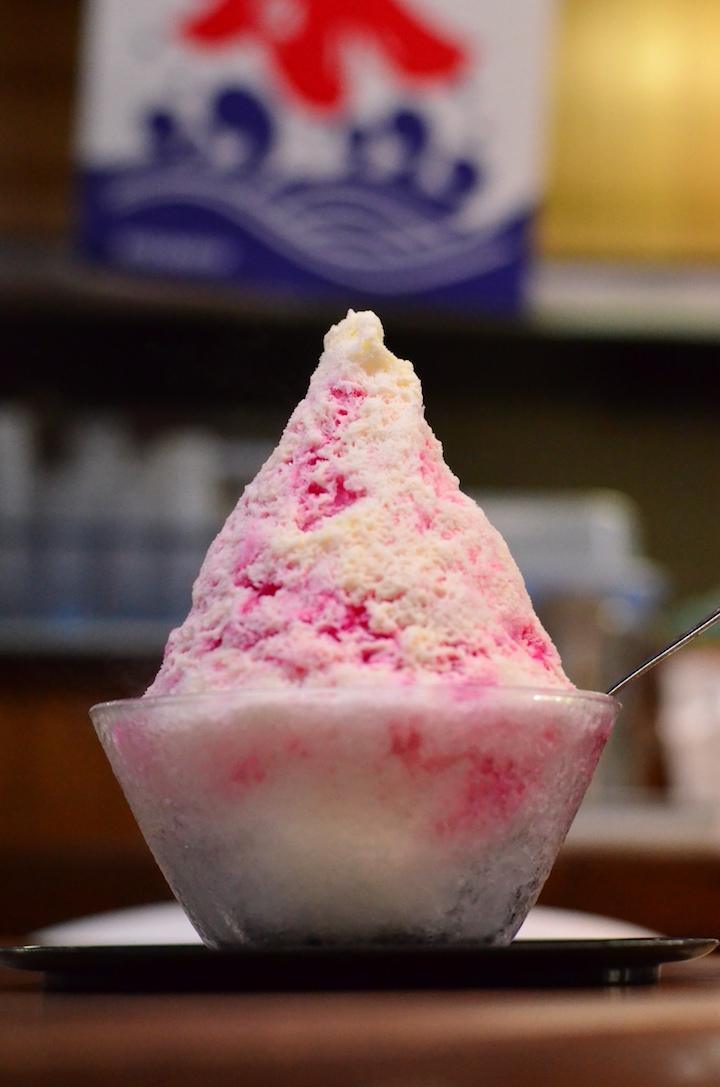 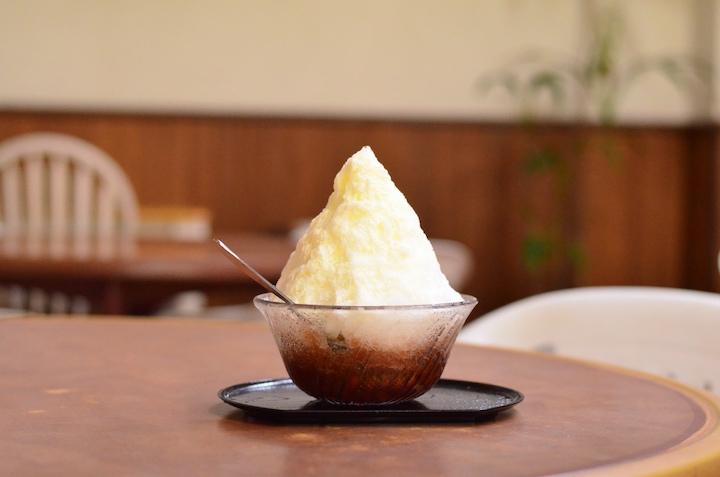 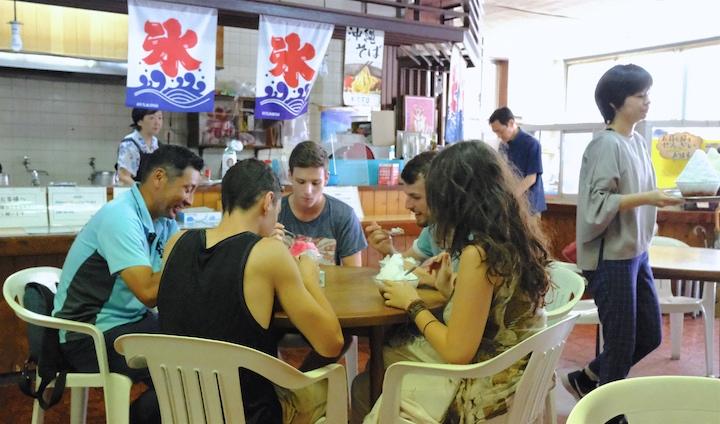 When I was there, a group from Switzerland who were in Okinawa to study Karate occupied a table and were enjoying their orders of Ice Zenzai and Ichigo Kintoki. In the Kume area where Sennichi is located are many Karate dojo schools, as the area has always had a deep-rooted connection to Karate. Many Karate-ka from around the world visit Okinawa year round to see, feel and learn in this holy land of Karate. Perhaps for these visitors, their interests go beyond Karate when it comes to Okinawan culture. 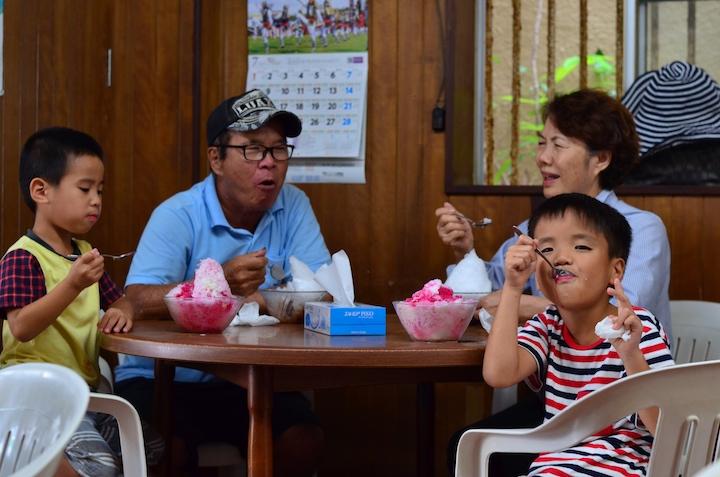 “Lately, there are more and more customers who have traveled to Okinawa from all over the world and not just from America and Europe. We still have a lot of local customers too, though. In the late afternoons, students from the junior and high schools in the neighborhood stop by, and on the weekends, there are a lot of families. Once, a customer who used to come when the shop first opened in the 50s, came in with their great-grandchildren,” smiles Reiko, as she glances toward a couple who came in with their grandchildren. I chatted with the older couple and they said they come to Sennichi every summer. The couple ordered Ice Zenzai each, and the two grandkids were enjoying their Strawberry Milk Ice. 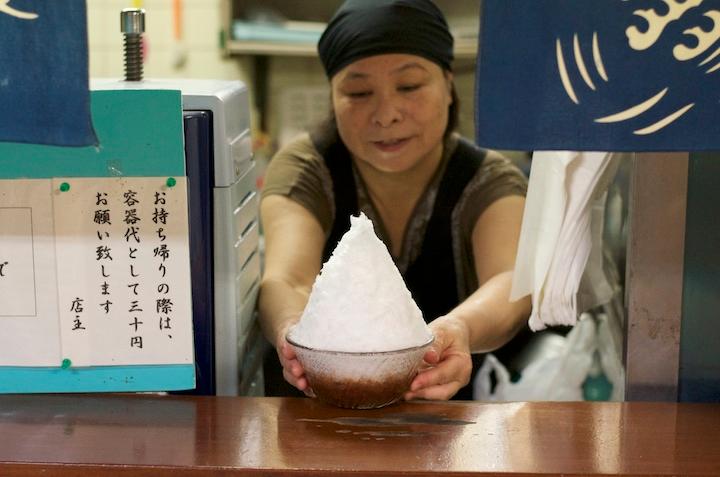 Reiko is currently 60 years old. She started helping out at the shop when she was in elementary school, and she recalls the many happy faces as they enjoyed their Zenzai and other shaved ice orders. She said she didn’t like helping out because she was embarrassed when she was an adolescent, but her friends used to say to her, “You’re so lucky that you get to eat delicious Zenzai every day!” From age 20 to her early 30s, she worked as a nurse in a different part of Japan, but returned to Okinawa with the man she married while away from home. She says she can’t imagine life without the shop now. She shared with me an episode that she said she’ll never forget. “On a stormy, typhoon day, a young man came to the shop to buy a Zenzai. I wondered what made him come on a day like that, and so I asked him. He said that his wife, who was pregnant with their child, had asked him to bring back a Zenzai from Sennichi.” Reiko explained that more than a few ladies suffering from morning sickness, or patients hospitalized with a serious illness, request for Zenzai takeout. When they’re not able to eat anything else due to a lack of appetite, they say they can eat the Zenzai. 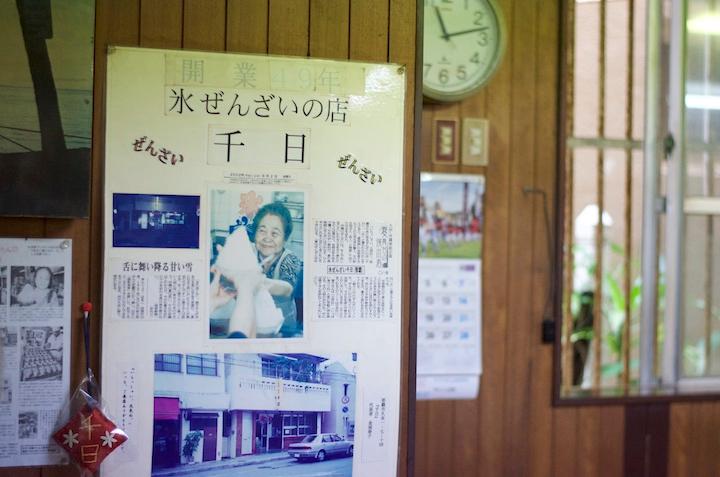 “You know, there’s a junior high school nearby? There were quite a few, well, naughty ones. There was a time when teachers and parents would come around to see whether there were students here, and if they were, they’d be given guidance and counseling. There was a time when some kids skipped classes and a teacher came by the shop to look for them. Well, my mother hid the kids in the kitchen so that the teacher wouldn’t find them,” Reiko chuckles. “Later, after these kids graduated, they came by to thank my mother for that time she helped them. There are just so many memories surrounding the shop. Reiko’s mother passed away 15 years ago. She was very much the image of an Okinawan woman, whom the customers loved very much. “When my mother passed away, we closed the shop for a while. Then one day, I came by to open the windows and doors to air out and clean the place. As soon as I opened the shutters, customers came in, happy to see the shop’s doors open. That’s when I thought we really need to get the shop back up and running,” Reiko said.

Even when times change, there are long cherished things that don’t change. From father to mother. From mother to the children, and then to the grandchildren. Sennichi’s Zenzai is definitely one of those long-cherished things that have stood the test of time and is being lovingly handed down the generations.

Closed: Mondays (If Monday falls on a holiday, the Tuesday will be closed) 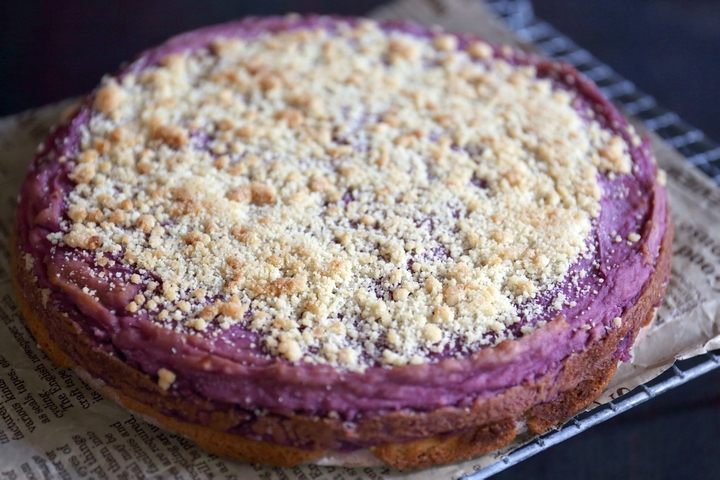 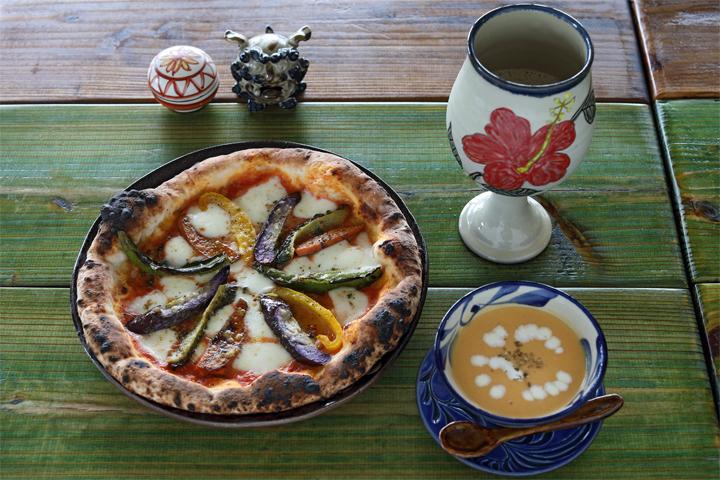 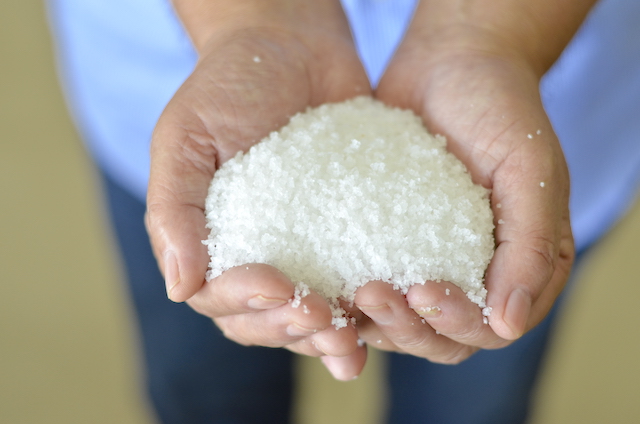 In Pursuit of ‘Delicious!’ Discovering the Special Salt Born from the Powers of the Sun and Wind at Tarama Sea Salt Research Facility (Tarama Island) 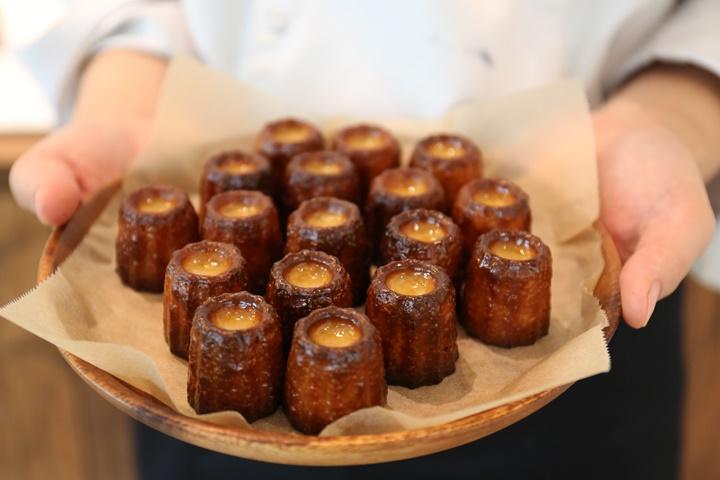 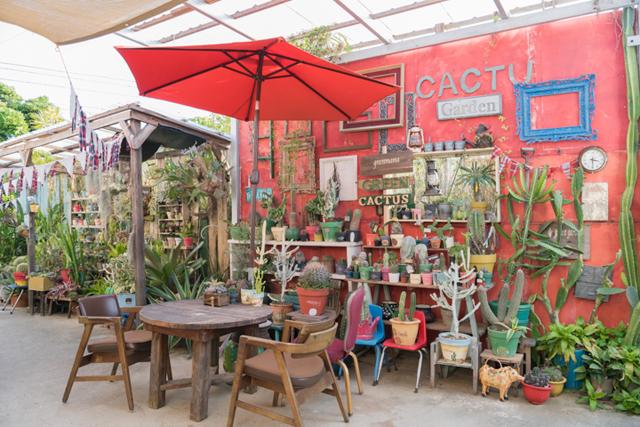