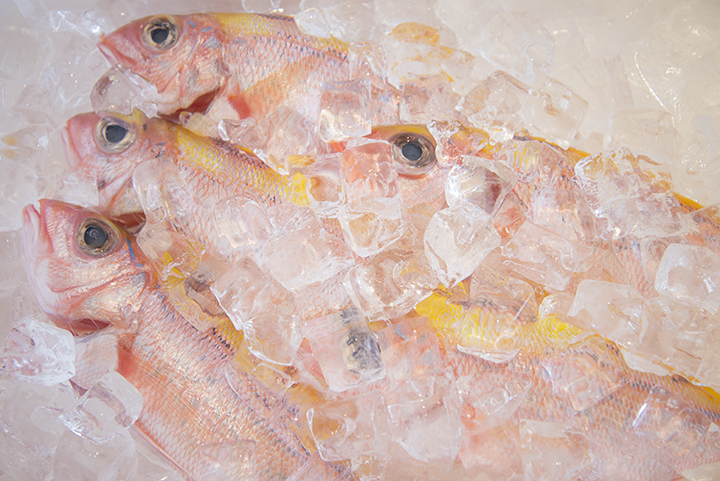 Itoman City is located in the southern region of Okinawa Island, and it’s known as a fisherman’s town. Hiroyasu Tamashiro was born in Itoman, and his Oji (grandpa) is an Uminchu (fisherman) boss in Itoman, his Oba (grandma) ran a sashimi shop, and his parents are seafood brokers. He’s a true Itoman-chu (a person from Itoman), through and through.

During his summer breaks in elementary school, he would wake up at 4:00 AM and go along to the fish auction every day. Since he was little, seafood was very familiar to him and being surrounded by Uminchu fishermen, he eventually dreamed of “opening my own shop in Itoman where people can enjoy delicious seafood.” 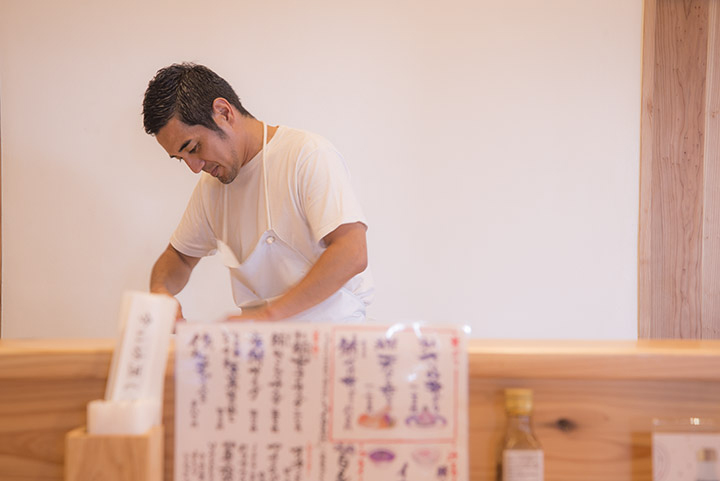 His dream came true in 2013. He opened the Itoman Gyomin Shokudo in Itoman City, a popular restaurant known for their butter-grilled fish and fish soup. He wanted more and more people to “see and taste the delicious fish in Okinawa,” and so in 2017, he started the fish burger specialty shop, Eightman’s SEA BURG at the Umikaji Terrace in Senaga Island. He’s introduced numerous fish creations full of fresh surprises as he continues to pursue the unique and delicious tastes of Okinawa’s local fish, and coming up with great ideas to bring out their flavors to the fullest and further their potential. 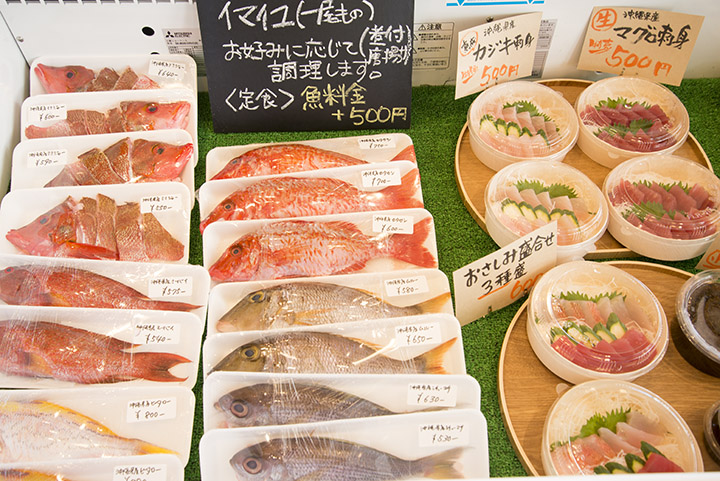 In May of 2019, he officially opened his third business, Imaiyu Tamashiro, located just eight minutes away from Naha Airport by car. In the Okinawan language, Imaiyu means “fresh fish” or “fresh catch”, and his shop is a sashimi shop, carefully preparing and serving up fantastic sashimi dishes using the Imaiyu. 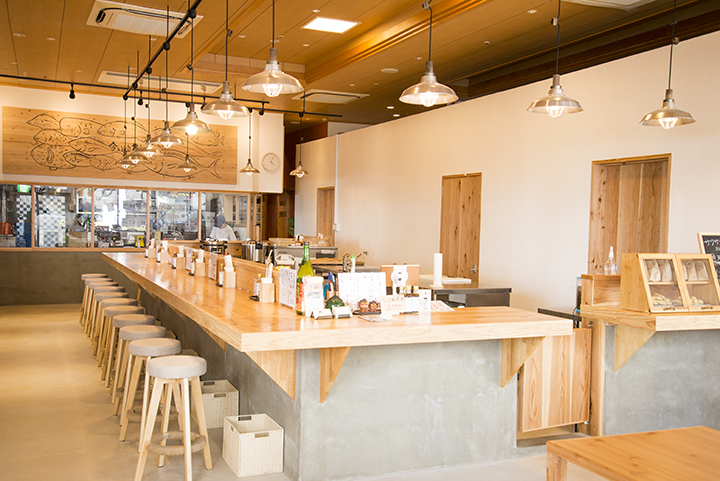 “When I was a kid growing up in Itoman, there were sashimi shops in every little street you went to. Mothers came to buy fish to prepare for dinner, others came to buy sashimi to take to a friend who was in bed with a cold, and people stopping by to pick up some tempura to take to wherever they were going. Sashimi shops were places where everybody in the neighborhood went to, and they were an important part of the community. Most sashimi shops are gone now, but I wanted to run a sashimi shop that my Oba used to run in those days. And opening this shop, Imaiyu Tamashiro, was one of my dreams.” 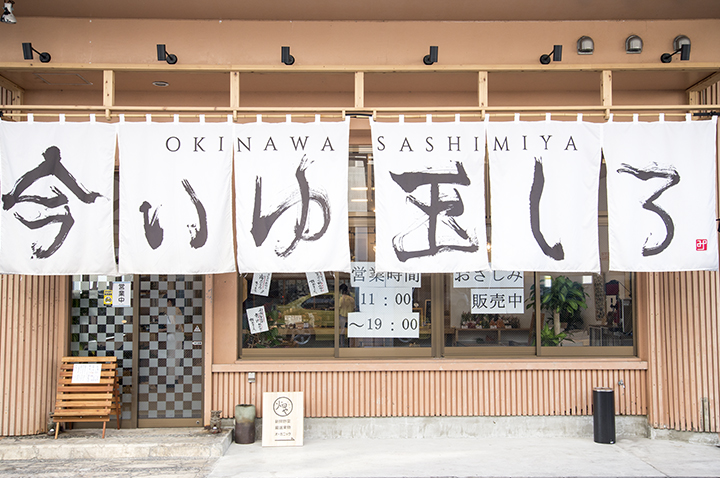 At the front of the shop is a large Noren, a curtain-like cloth that flutters in the wind like fish swimming in the seas. The name of the shop is written dynamically across the Noren, and is a work by Mitsuo Shindo, a Japanese art director who resides in Okinawa. 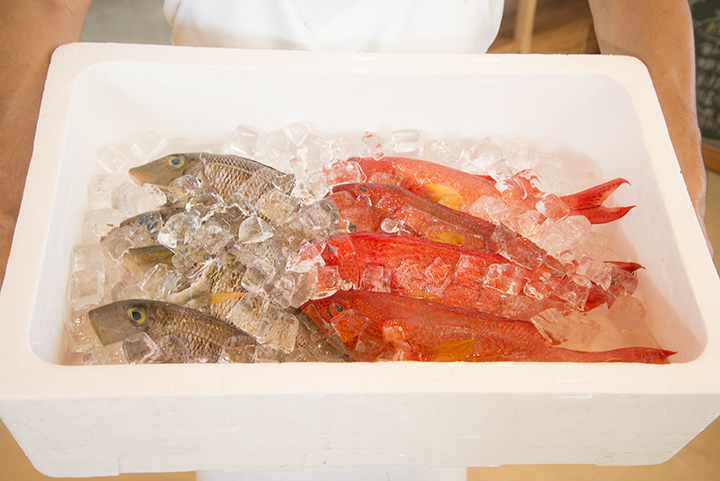 Every day, his older brother who’s a seafood broker delivers the fresh catch directly upon purchase at the auction. At times, Tamashiro-san also buys fresh fish directly from fishermen he trusts, and so the Imaiyu found at the shop is carefully selected by fish experts. 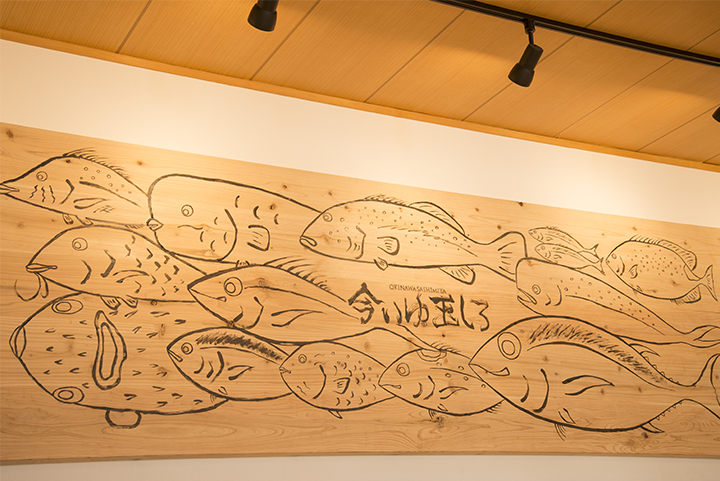 Displayed within the shop is a charming illustration of fish, drawn by Tamashiro-san himself. The sashimi he offers can be taken out to enjoy at home, but also as a sashimi set to eat inside. You can also select a fish that you want to try and request your preferred method of preparation to enjoy. The counter seats encircle the open kitchen which is laid out like a stage, and so you can chitchat with Tamashiro-san and enjoy the casual atmosphere. Of course, they also offer fish tempura that you can savor there or take with you for a snack for yourself or for your friends, family, colleagues and others. 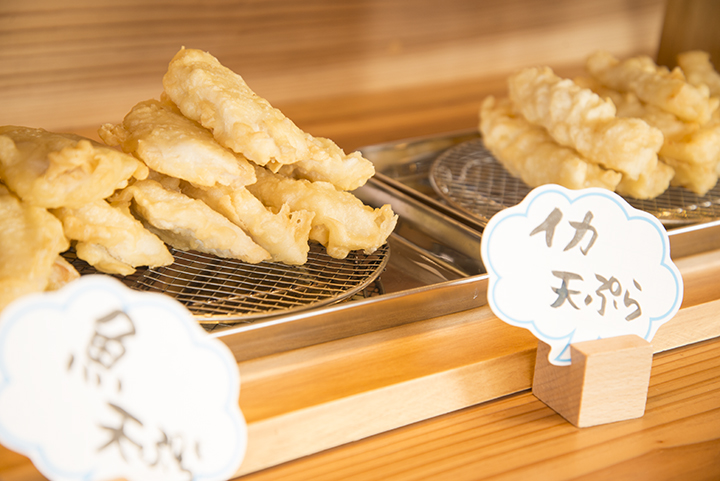 “What can I do to offer the tastes of the wonderful Okinawan fish even more?”

That’s a big theme for Tamashiro-san that he’s always focused on.

“Some people find Okinawan fish to be a little less delicate and milder in taste in compared to the fish from mainland Japan, and are reluctant to choose them. But I find that to be the uniqueness of Okinawan fish, and I want to bring out their characteristics even more through preparing each fish in ways that matches them. For example, I can sprinkle salt on a particular type of fish to eliminate excess moisture and to bring the delicious taste together more. Or I can do a quick soak in hot water to bring out the crunchy surface of other types of fish, or sear the skin to bring out the aromatic and delicious tastes. Because we’re in Okinawa, where we’re so close to the fishing areas which allows us to enjoy fresh catch, I want to continue finding ways to have people taste and see the wonderful Imaiyu through various preparation methods.” 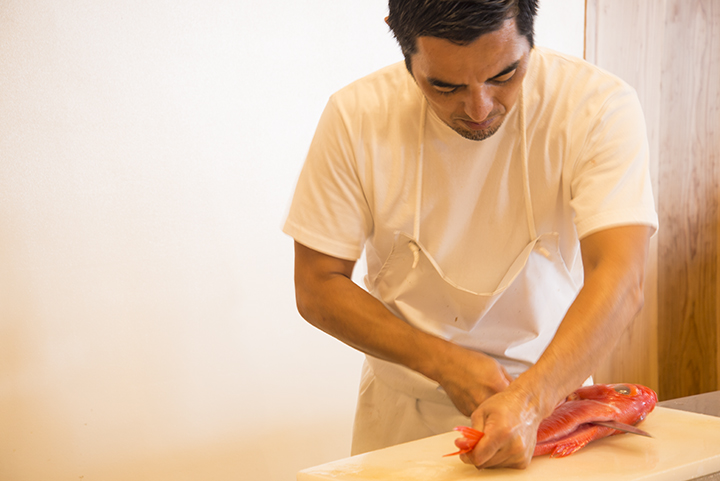 That’s the concept of Imaiyu Tamashiro, and it was through this concept that their popular menu item, the Uminchu-no Sashimi Donburi (fishermen’s sashimi rice bowl) was born. Okinawa boasts the third largest tuna fishing in all of Japan, and tuna is the star of this rice bowl, served together with squid, giant clam, red beam, spangled emperor fish, red grouper, leopard coral-trout, great green turban shellfish, and other fresh catch of the day. This fantastic sashimi bowl has eight varieties of Imaiyu. Tamashiro-san says it took him a long time, repeating many trials and errors to put this menu together. 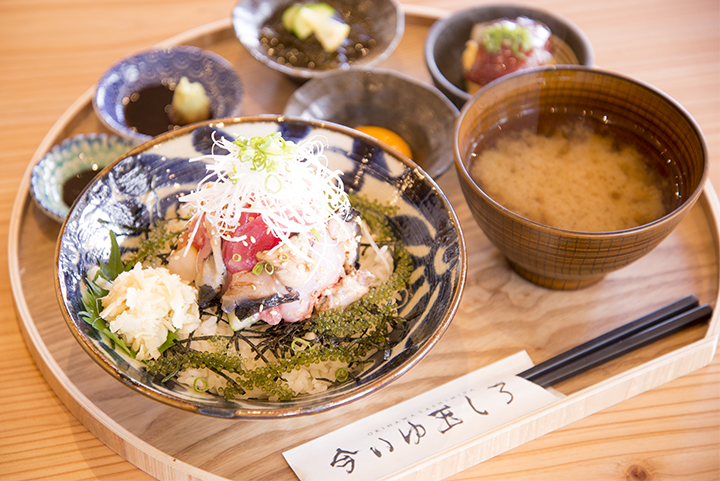 “Okinawan fish have little fatty areas, so I had to try to figure out how to bring out the depth in taste. As I continued studying about sashimi, I decided to try out the “aging” method that sushi restaurants do. I tried it with all sorts of fish, and found some tasted better after letting it rest for a while, and some simply didn’t change. I tasted all the differences, topped on rice, but I just wasn’t totally satisfied. They were delicious, but I wanted to bring out more of the unique characteristics of Okinawa, more of us. For me, the concept of offering Okinawan fish for people to enjoy is important, but it’s equally important to “present the food culture of Uminchu to the modern world.” So I decided I needed to go back to the start, back to my roots.” 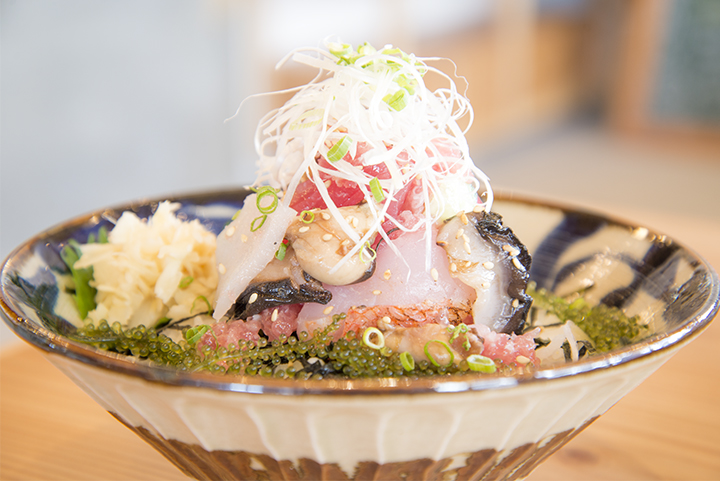 Tamashiro-san thought about how the Itoman Uminchu ate their fish. On the boat, they chopped their fresh catch and dressed it with Sumiso or miso with vinegar. A wisdom born from an age when refrigeration technology was yet to be introduced. Tamashiro-san continued his research and says, “I think I ate a few years’ worth of sashimi with sumiso (laughs).” He then came up with the idea of fermentation.

“My idea was Shio Koji, or salt-marinated rice malt. I was told that in the past when Itoman Uminchu didn’t have access to seasonings, they would eat the fish simply dipped in sea water, and so I thought, salt would work. I chopped up tuna and let it marinate in the shio koji and the result was amazing. The taste was really enhanced and very delicious. Because there was little fat, I added sesame oil to add flavor and depth and the texture turned out great, like negi-toro. Like the Uminchu, I topped the tuna with various other fish, mixed it up and it was great. After about six months of trying all sorts of ways, I finally came up with a menu item that I was very confident with and very proud of.” 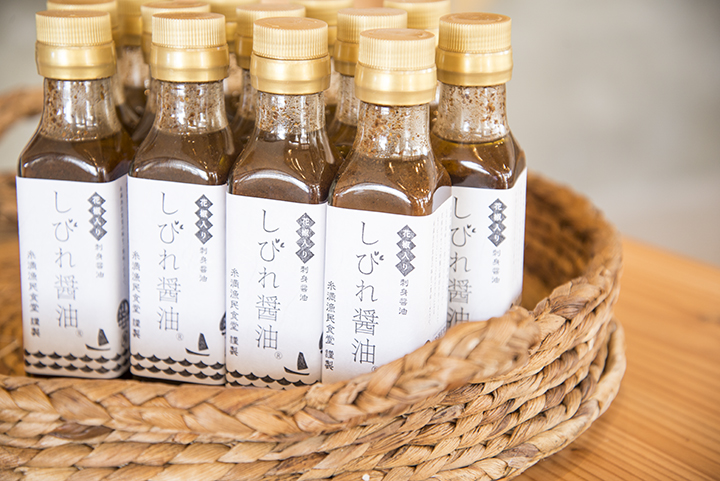 Tamashiro-san recommends eating the sashimi one slice at a time, with a simple blend of homemade soy sauce and wasabi. Next, try it with his own Shibire Shoyu, an original soy sauce made by Tamashiro-san’s company made with hot and aromatic Szechuan peppers. Leave a few slices of sashimi and some tuna negi-toro, and finish it off with Kimi Shoyu, or soy sauce with egg yolk! I tried Tamashiro-san’s recommended way of enjoying this dish, and wow! It was awesome! 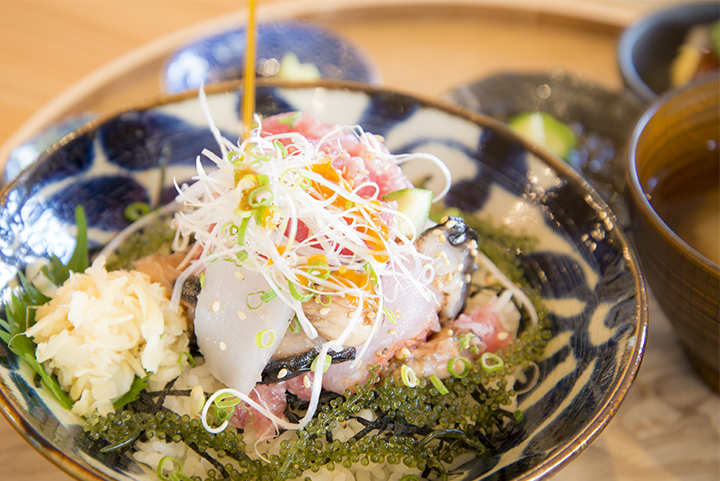 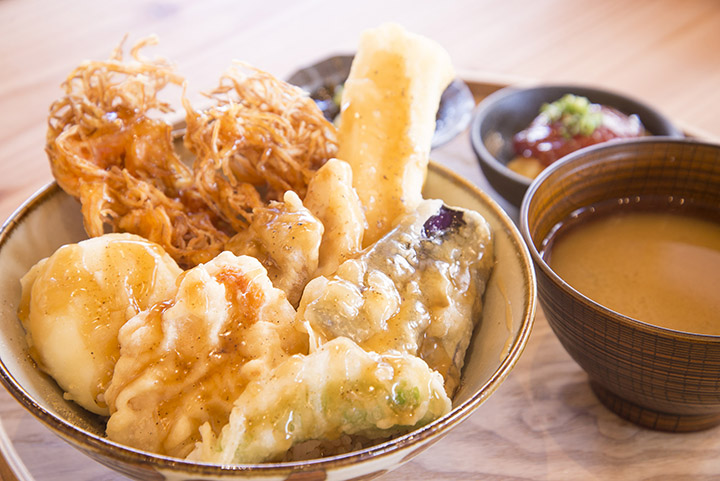 “Can you taste the light curry taste? That’s from the Chinese five-spice mix sprinkled on top. This was inspired by the great combination of tastes in curry udon, and so I made the sauce using tempura sauce, dashi broth, accompanied with the touch of curry flavor from the spices. You can use Shibire Shoyu to add more kick to the taste, or crack an egg and mix it up for a milder taste. You can enjoy it in various ways.” 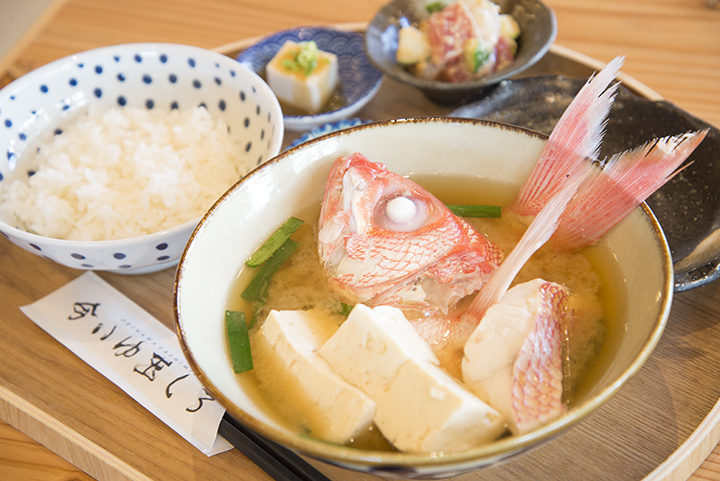 Their Makanai Fish Soup Set using Ichiban Dashi or the freshest broth from bonito, Kombu kelp and dried sardines offers a rich and wonderful flavor of fish that seems to seep throughout your body.

“The old sashimi shops offered fish soup and were very popular with customers. They would purchase fish soup and take it home to enjoy for dinner. I hope I can bring that back here, at this shop. I want to set it up so people can choose their preferred fish earlier on in the day, and request to pick it up at a certain time. They can swing by after work and take it home with them in their own pots.” 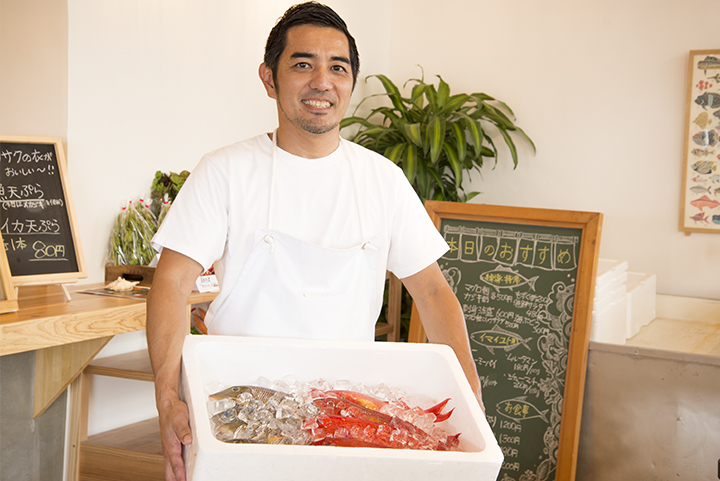 Tamashiro-san’s aim is to be a sashimi shop that’s cherished by the locals. And for visitors to Okinawa, He hopes to offer an introduction to really enjoying the wonderful fish available on Okinawa. He wants to continue his pursuit of finding various cooking methods for people to enjoy the local Okinawan fish.

“I came across this one book when I was about to start my first restaurant, Itoman Gyomin Shokudo. It was a book on the history of the Uminchu in Itoman, written by Hisako Kato. As I read through the pages, I found my grandmother’s name, and there were things written about my parents. Since that moment on, I was moved by a sense of mission to “tell the world about the greatness of Okinawa’s Imaiyu”. And here I am today. It makes me so happy when people say, ‘Okinawa’s fish is truly delicious!’ And when kids who normally dislike fish say with a big smile, ‘The fish was yummy!’ there’s nothing better than that (chuckles). Okinawa’s Imaiyu is really delicious! I hope you’ll visit us to experience it for yourself.” 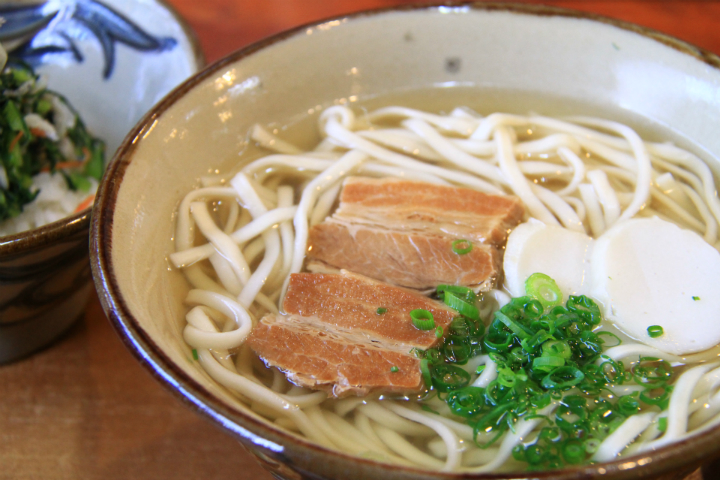 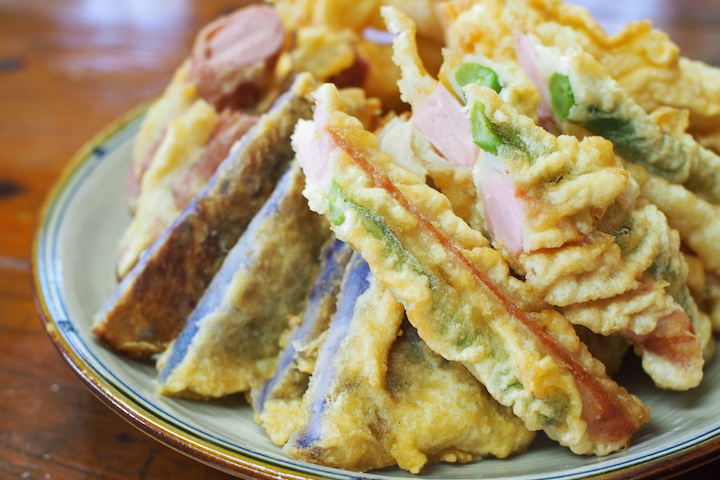 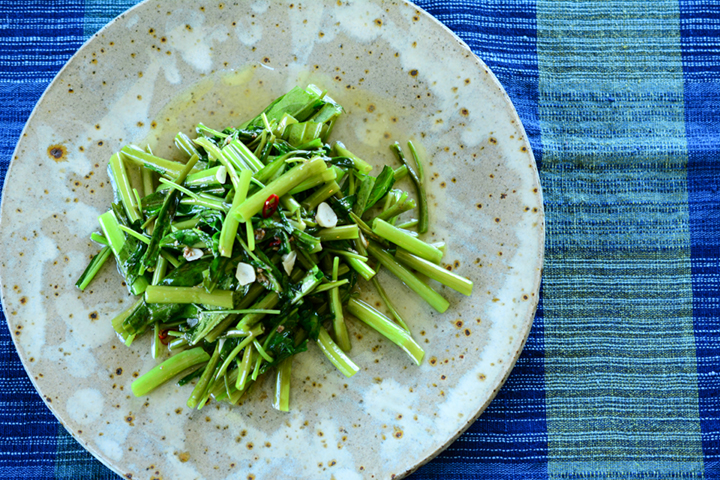 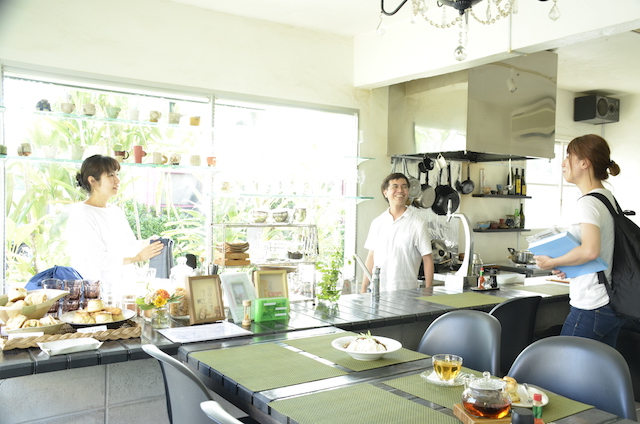 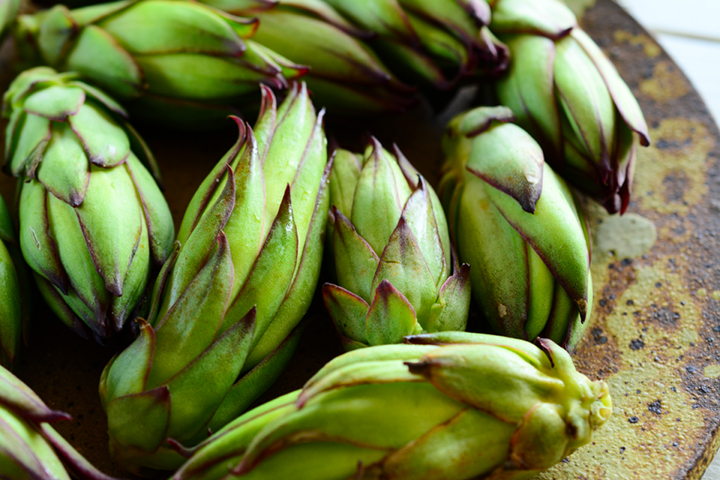 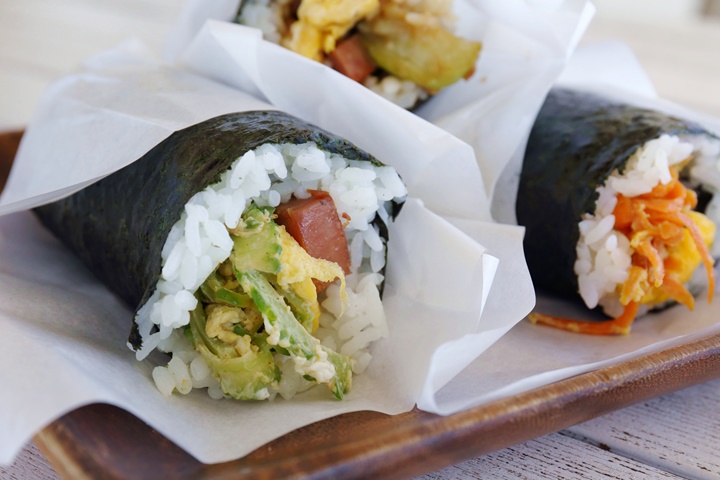