“Yachimun no Sato (Village of pottery in Yomitan)” is located in the north of Yomitan Village, and this facility is situated in a quiet area where is filled with trees. Especially, “Kitagama (North kiln),” the kiln at the north end of facility, is the biggest kiln in Okinawa. In 1990, 4 pottery masters who had training at different Yomitanzanyaki pottery studios created this rare “kiln” together. Presently, potters from 4 pottery studios fire their pottery at Kitagama for 5 times a year. 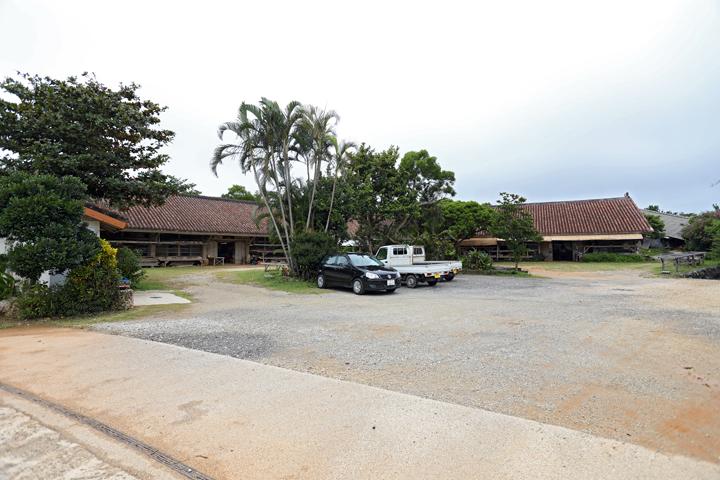 A building with triangular roof across from L-shaped Kitagama is “Yomitanzanyaki Kitagama Baiten (shop).” Pottery items are available at this shop with reasonable prices, and these are made by 4 pottery masters and young potters from all over Japan. Usually small items are available starting from hundred yen, and popular bowls are about 1,000 – 2,000 yen. The most expensive item is around 15,000 yen. There are a variety of pottery including bowl, sake set, plate, and mug at the shop. 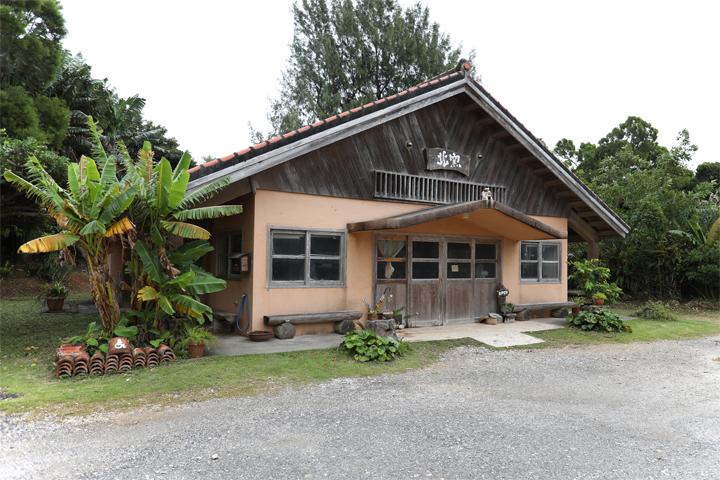 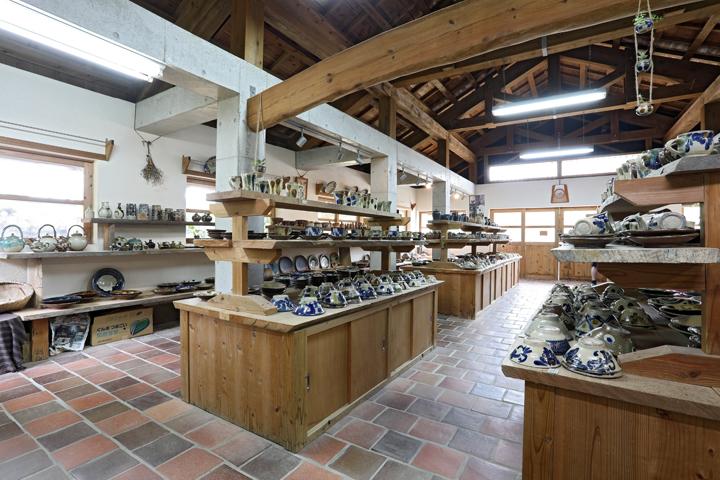 I will explain briefly about works and styles of 4 pottery studios from display order starting from the entrance of shop (as of October, 2017).

First, Matsuda Yoneshi Kobo (Studio). The pottery master Yoneshi Matsuda was born as the 5th son of 7 siblings in Yomitan Village, in 1954. He is a twin elder brother of Kyoshi Matsuda. Yoneshi started to work at a pottery studio called Ishimine-gama in Shuri, Naha City in 1973 and started his career. Later, he started to work at Omine Kobo in Yomitan Village in 1979. After he was accepted for the Japan Folk Crafts Museum Exhibition, he started to hold his solo exhibition in many regions until now. He is intent on training his apprentices, and also eager to learn the traditional technique at the same time. The characteristic of his work is delicate and fine, but can be vitalized. 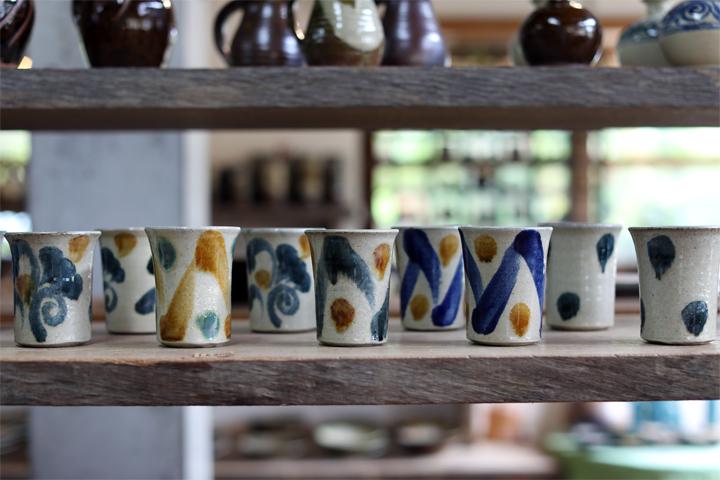 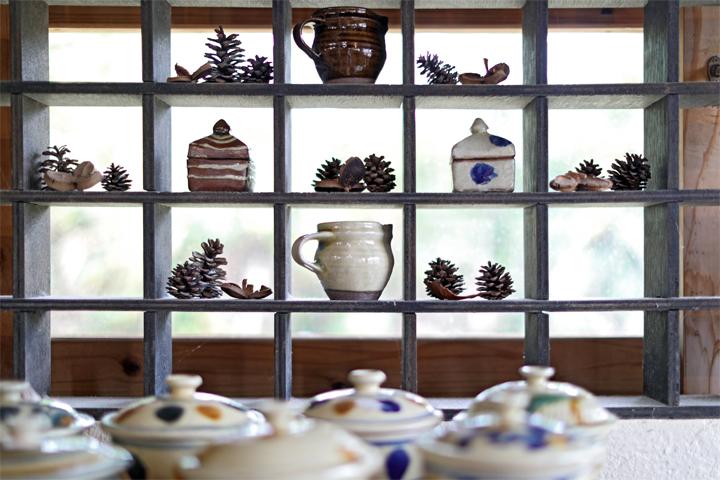 Next, Yonahara Kobo managed by Masamori Yonahara. He was born in Henza Island in 1950, and became an apprentice with Omine Kobo in 1987. He held his solo exhibition at Scéne Art Gallery and other places in and out of Okinawa in 1996. His work is in the motif of Okinawa, Asia, and Africa, and he mainly uses Persian blue. He also adopts a technique called incrustation, and creates his unique view of the world with its fine touch and exotic pattern. 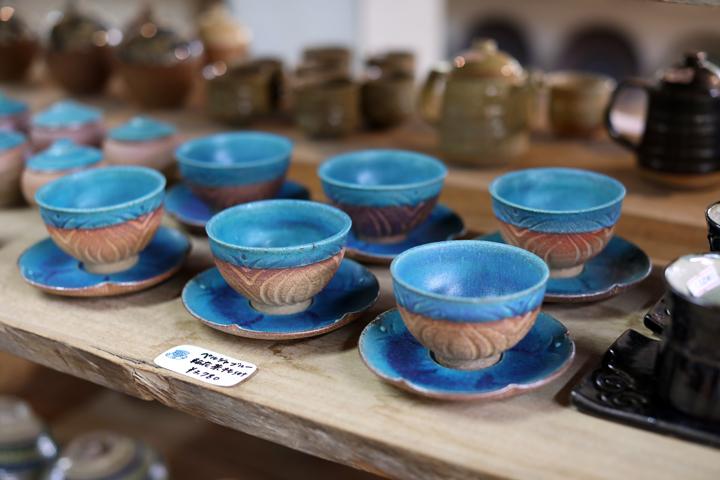 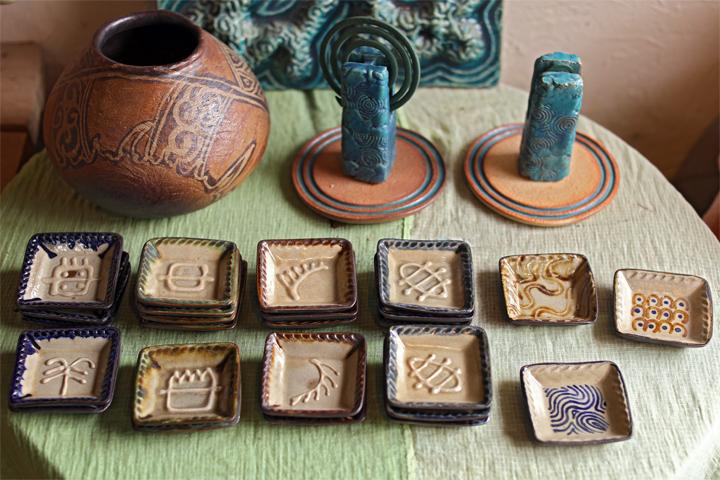 And, Matsuda Kyoshi Kobo who is in charge of kiln this year (PIC rotates every year). He became an apprentice at Ishimine-gama 1 year after his twin brother Yoneshi started working at the same studio, and later worked at Omine Kobo as an apprentice in 1980. After he was accepted for the Japan Folk Crafts Museum Exhibition in 1994, he won many prizes and held his solo exhibitions. He follows the tradition, but also he keeps seeking originality at the same time. His style features unpredictable stability. 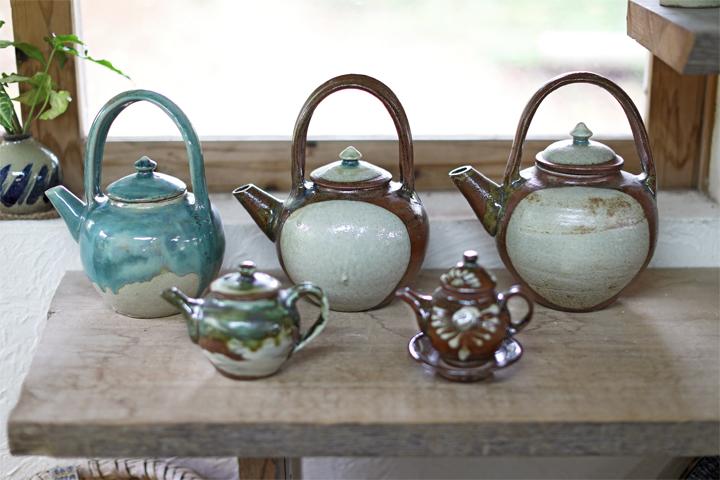 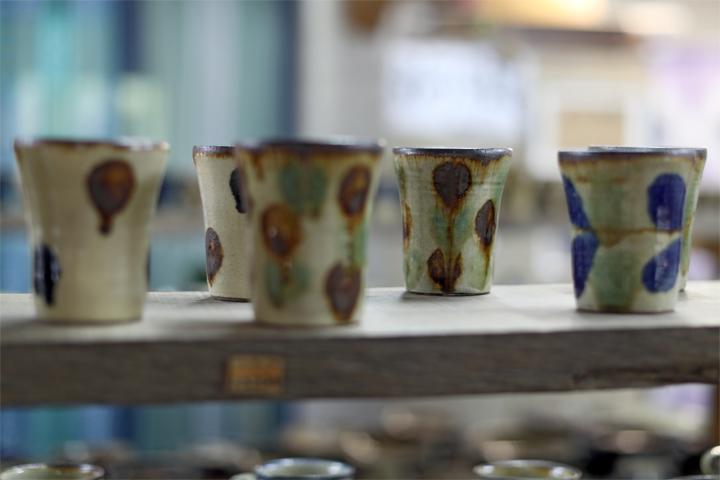 Finallly, Miyagi Kobo which is managed by Masataka Miyagi who was born in Naha City in 1950. First, he started to work at Yamada Kobo since the launch of it in 1975. Later he won many prizes and holds exhibitions aggressively. His works feature thickness and heaviness, and they all fit in people’s hands easily. They are easy to use and familiar dishes for most people, and also paintings on each item look powerful, dynamic, and unique. 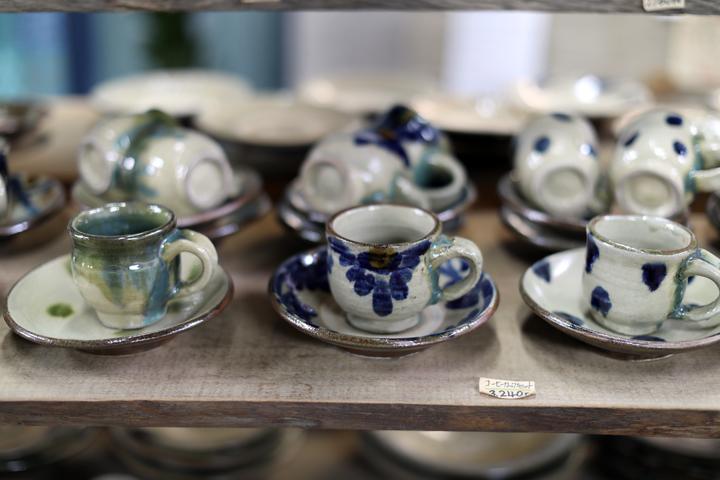 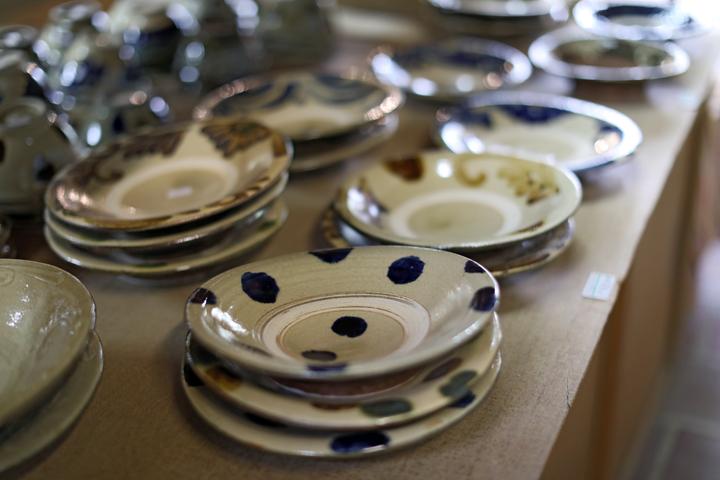 Each work by 4 pottery masters has its own uniqueness and own style. All these works attract pottery fans not only in Okinawa and Mainland Japan, but also all over the world. If you feel awkward about going to galleries, you can stop by at this shop freely, ask the staffs casually, and find what you really like to get. I hope you can find your favorite pottery at this shop. 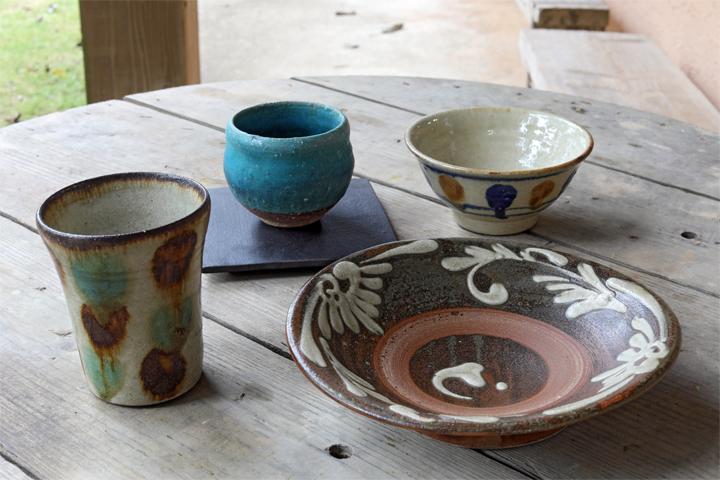 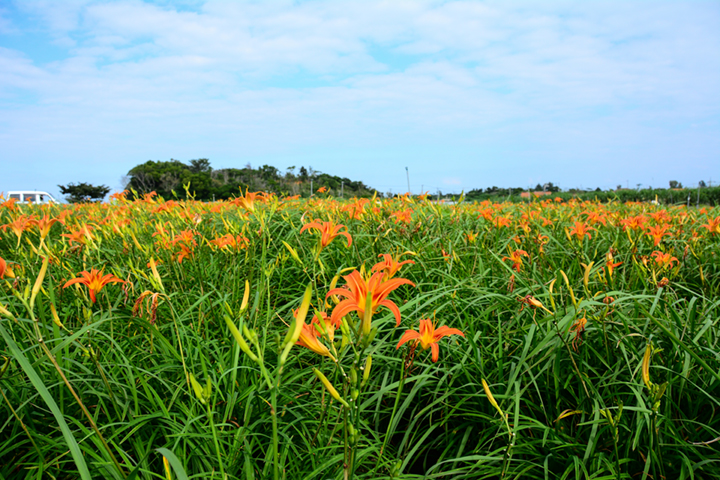 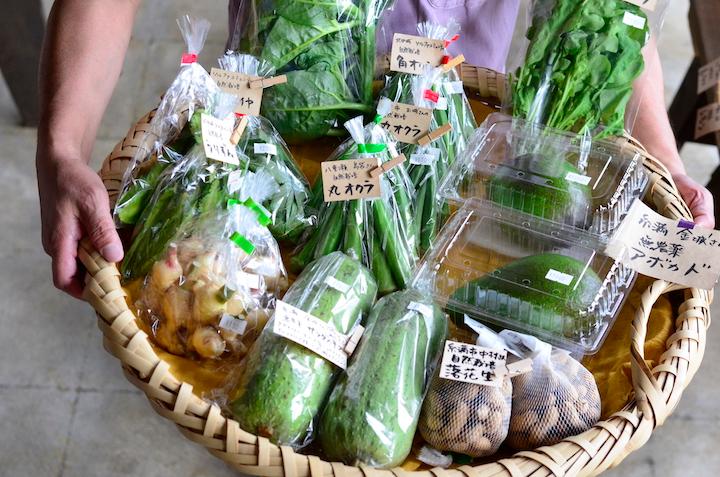 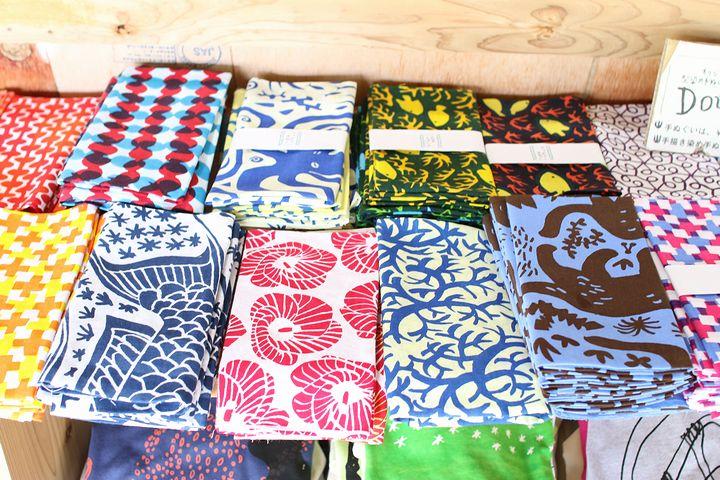 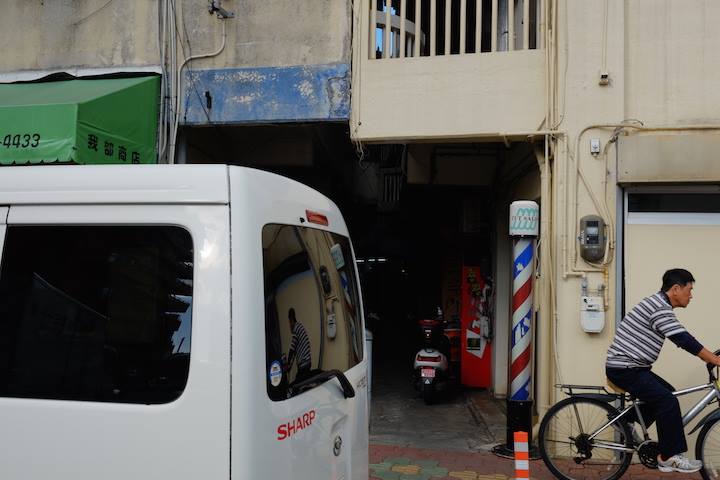 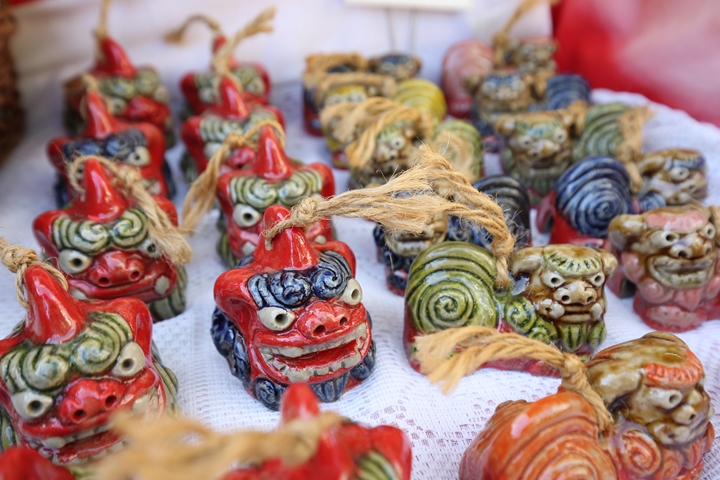