Cultivation, Refinement, Roasting, and Extraction. DONABE-COFFEE Seeks For the “Interesting Part of Producing Coffee from the Beginning” (Nago City) 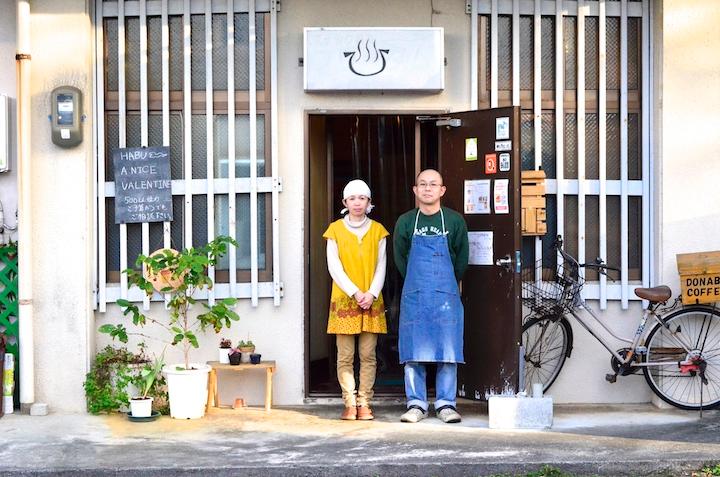 There is a night district where many bars are located almost in the center of Nago City. The district is called “Midori,” and it was derived from “Miidoori (new street in Okinawan language).” The name does not sound like a night district, ha? Also, this is where a unique coffee shop called “DONABE-COFFEE” is located at. Coffee that is roasted with donabe (earthenware pot) is served here. 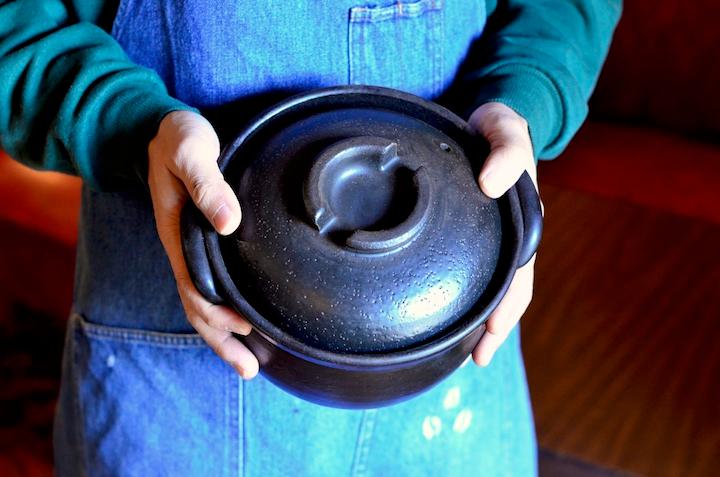 Hiroshi Funada, the owner, learned roasting by using a coffee roaster first. Later, he started to roast coffee beans with a spoon-net at home. What made him started roasting coffee beans with an earthenware pot? The reason was simpler than I thought. Funada loves coffee, and he drinks it many times in one day. Spoon-net size of roasted coffee runs out very quickly since the quantity is limited. After much consideration, one idea popped up on his mind. “That’s right, I have an earthenware pot!” (the earthenware pot on the above photo is the actual pot that he used) 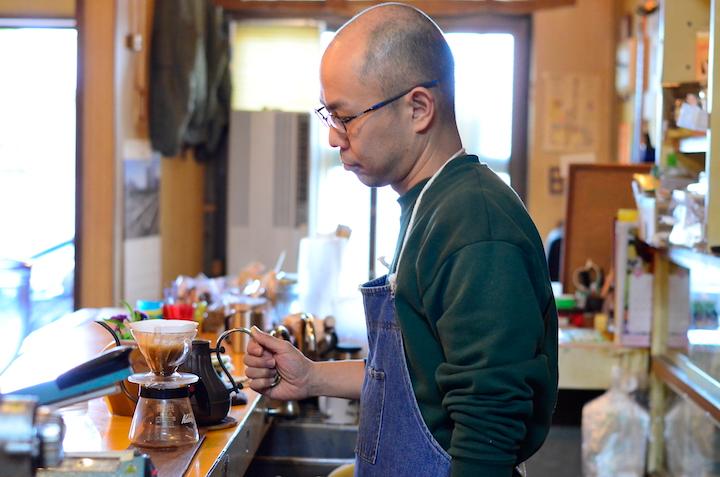 When he tried it as a trial, it came out very good. He truly thought it was the best one that he had in his life. Unlike the coffee roaster, he can look at the way beans change as long as he wanted when he roasted beans with the pot, and it got his interests the most. Since he enjoys looking at the way beans get roasted, it is the best way for him to roast beans.

What is the key to roast beans with an earthen pot? I tossed out a question to him, and he answered as following. “As for coffee roaster, a bean that contains moisture is hard to vaporize, so the bean gets heated by steaming. As for the earthen pot, a bean gets heat up having far infrared ray effect. It doesn’t have a strong impact at first, but its sweetness and richness come after that.” 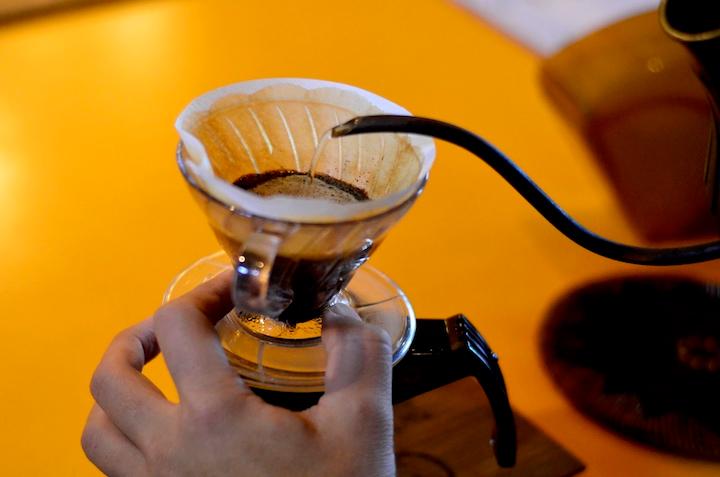 Even if electricity or gas has shut off for certain reasons, Funada can roast beans anywhere as long as he has a propane stove and earthen pot. Coffee at DONABE-COFFEE is made like this. Currently, beans including Mandheling of Indonesia, peaberry of Brazil, bitter blend, and sour blend (300 yen each) are used at DONABE-COFFEE. Mandheling is a familiar bean in Japan, and it is known for a rich and unique lingering flavor. The characteristic of peaberry is that its strong flavor. And, customers can also order decaf coffee or seasonal coffee beans. For example, seasonal beans for now are Papua New Guinea and Myanmar. 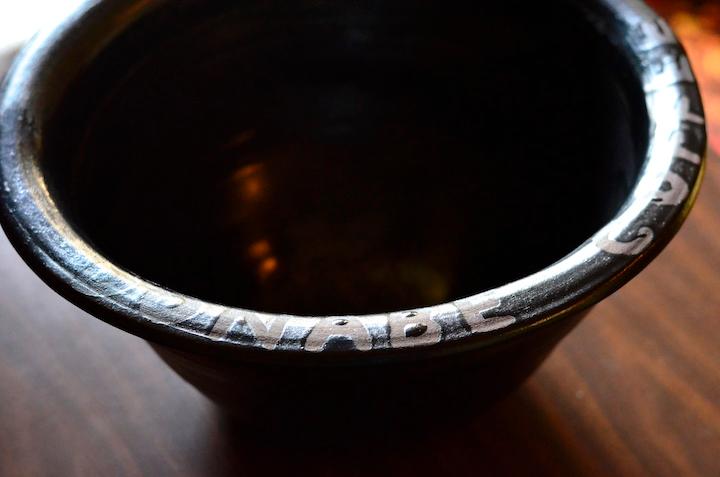 “I selected beans after roasting many kinds of them, but this is a hard work. Actually, I want to try with many beans.” Funada told me honestly. The earthen pot he uses now was specially made in Ogimi Village. After exchanging with a client many times, the perfect earthen pot has finally completed. However, he is able to roast only 700g / 1.5lb of beans with the pot for each time. This is the amount of green coffee beans, and roasted beans will be only 500g / 1.1lb.

Another drink menu includes iced coffee of the week (300 yen), Café au lait with brown sugar syrup (350 yen), Coffee float (400 yen), Shikuwasa soda (350 yen), and more. Since Funada uses the earthen pot to make coffee, he might be particular about the ice cream for this coffee float as well, so I asked him which ice cream he uses. 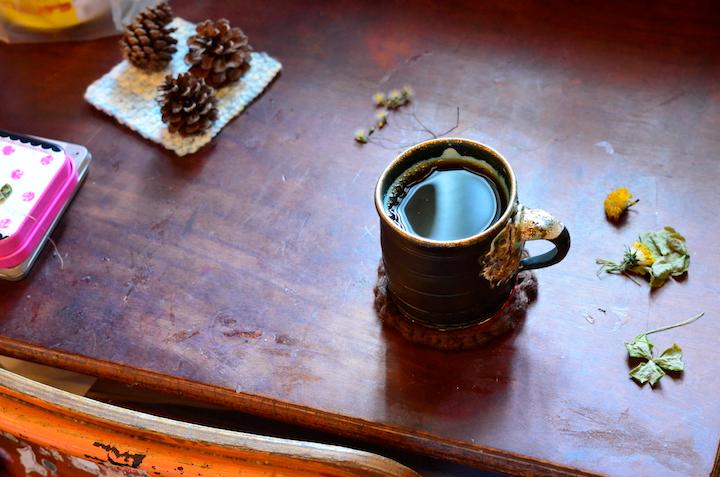 “It’s Lady Borden.” Maybe I looked confused when I heard his answer which I did not expect. “I thought about using Häagen-Dazs since its ingredients are simple. But the atmosphere of my shop is nostalgic, so I chose Lady Borden because it has a strong vanilla flavor.” Funada continued.

Funada aims to make coffee that people can drink every day during work without worrying about money. “It is necessary to grow Okinawan coffee as a big brand or work hard to make better coffee. On the other hand, if the price gets more expensive, the value of coffee gets increased. As a result, some people are unable to buy coffee. It is a sad thing that local people are not able to have good things of the area where they live. That is why I decided to offer reasonable coffee that everybody can enjoy drinking.” 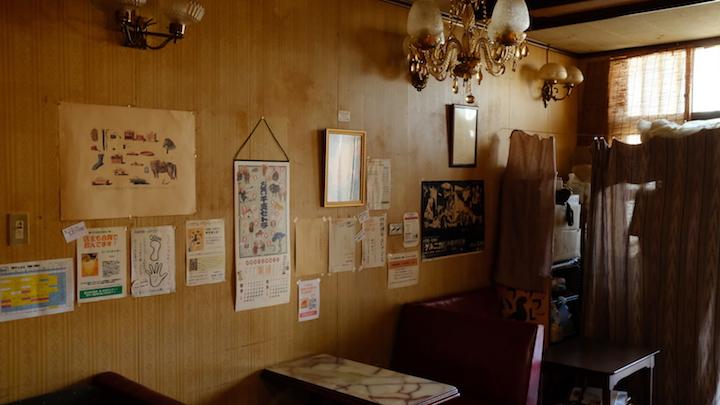 Funada has an allotment garden in Nakijin Village which is 30-minute drive from his shop, and he grows about 100 of coffee trees. “This farm used to be a shikuwasa farm, but it was abandoned for about 10 years and trees 30 centimeters in diameter were growing here and there. Since this farm is surrounded by windbreak, a power shovel was unable to enter here. All I had to do was to pull out with a pick little by little and plant coffee trees. I had to repeat pull out and plant trees.” He still goes to the farm 2 -3 times a week. When it does not rain for many days during summer, he needs to water the farm every day. It is not easy to grow plants.

“I keep doing this is because ‘3.11 - the 2011 off the Pacific coast of Tohoku Earthquake -’ is the reason why I moved to Okinawa. This natural disaster is the reason why I concern about offering reasonable coffee.” His ideal world is “to plant only few coffee trees in the corner of his garden and many people drink coffee that he grew and made.”  He thinks it sounds cooler to support elderly people to drink his coffee more than offering expensive beans to some celebrities. Probably the disaster on 3.11 gave him a huge impact on his life. 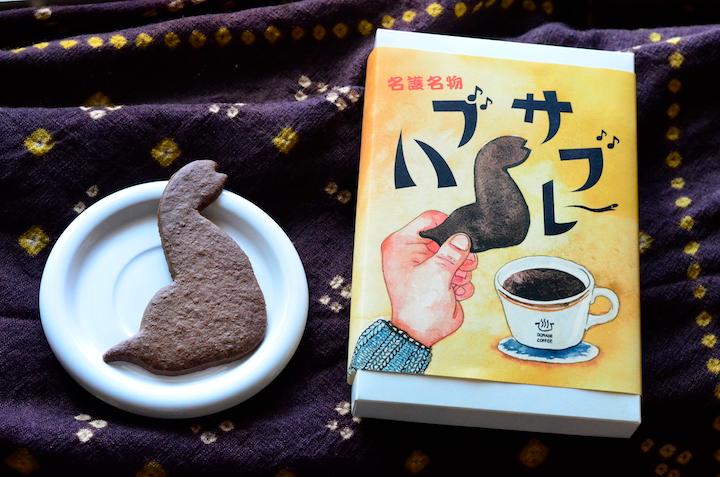 The reason why he moved to Okinawa after 3.11 was because his wife, Maki is from Okinawa. They work at this shop together, and she makes snake-shaped sablé next to Funada who makes coffee. The sable on the above photo is “Habu Sablé,” and the sablé on the bottom photo is “Kohabu-chan.” Both of them are popular items at DONABE-COFFEE. According to Funada, if the popular souvenir “Hato Sablé” is the image of Ying, “Habu Sablé” is Yang. Funada said, “I’m a big fan of Hato Sablé because I like the company’s business policy regional contribution.” 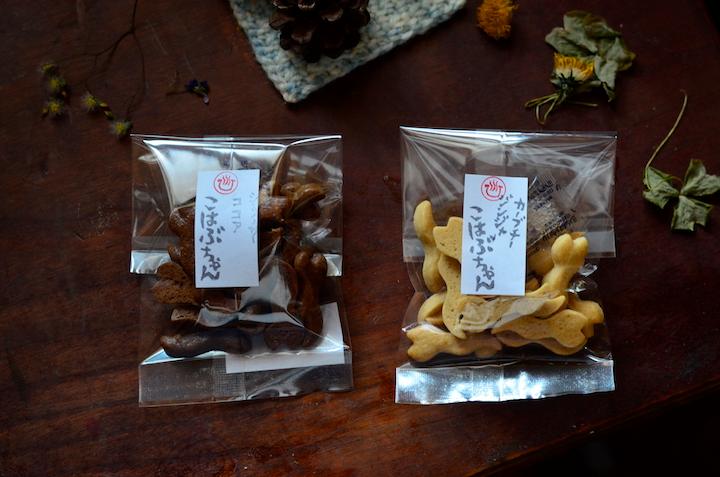 Back in 2013, Toshimaya (the company which produces ‘Hato Sablé’) got the naming rights of 3 beaches in Kamakura City, Kanagawa Prefecture. When the company sought ideas of each name to the public, many people said, “we do not want the names to be changed.” Even though the company has the naming rights to choose any names they want, they decided to listen to public opinion and keep the same name as before. Funada became a big fan of Hato Sablé after he heard the episode.

“We have a philosophy of business to ‘make the ordinary life more interesting.’ We want to put smile on our customers, so we wanted to make funny snack to make them laugh a little bit.” Pulp of Shikuwasa contains in the sablé, and it goes well with coffee. You can also purchase it at Nago City Office and souvenir shops in Nago City. 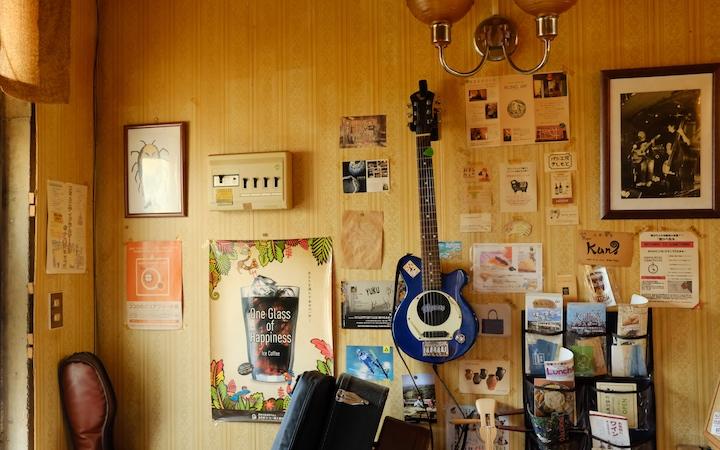 Coffee beans are also available at DONABE-COFFEE. The price is between 450 – 700 yen / 100g (0.22lb). For those customers who purchased more than 1,000 yen of beans, 1 cup of coffee will be served for free. If you order more than 1,000 yen on drinks at the shop, Funada will do fortune-telling for you for free. He is a musician and released CDs from a major record label. He is an also poet, and his poems are available at the shop. Unique Funada and his wife Tamaki who was also a musician run this unique coffee shop together. They have not yet offered coffee stably which is made with coffee beans that they grew, but I am sure that someday they will do it. They hold a special tour to the coffee farm constantly, so let’s join the tour if you were interested. 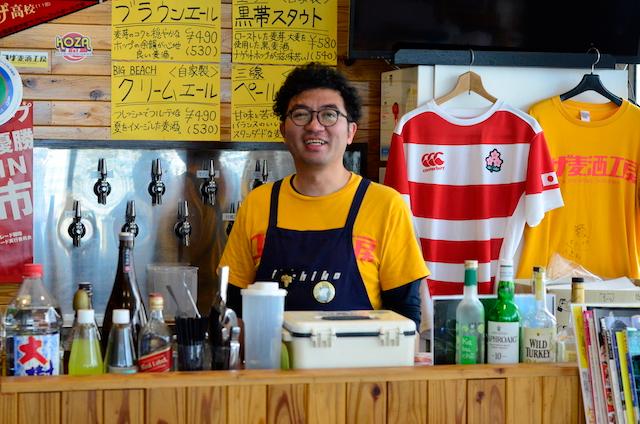 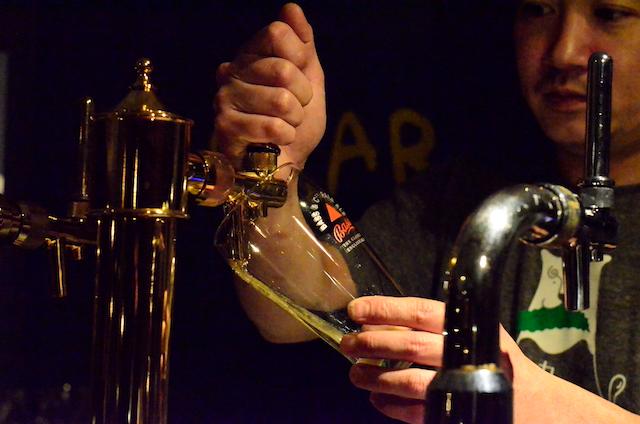 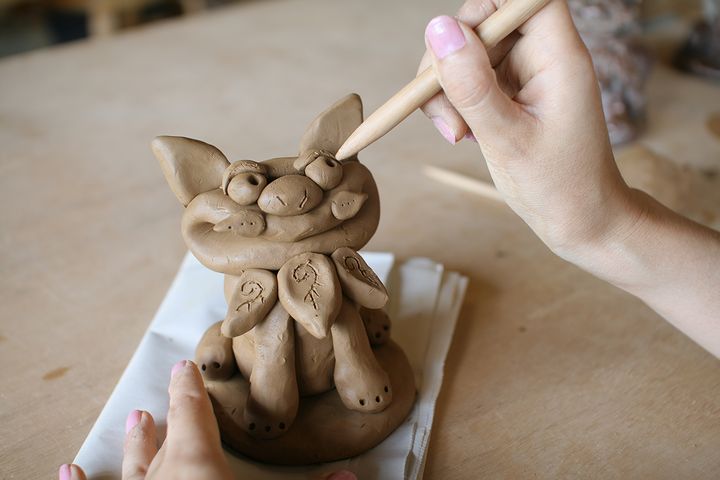 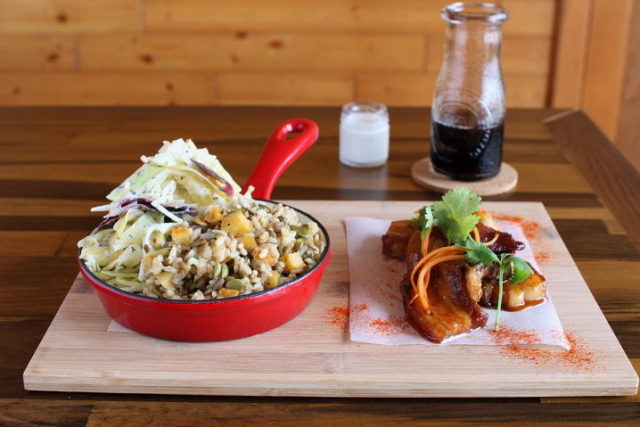 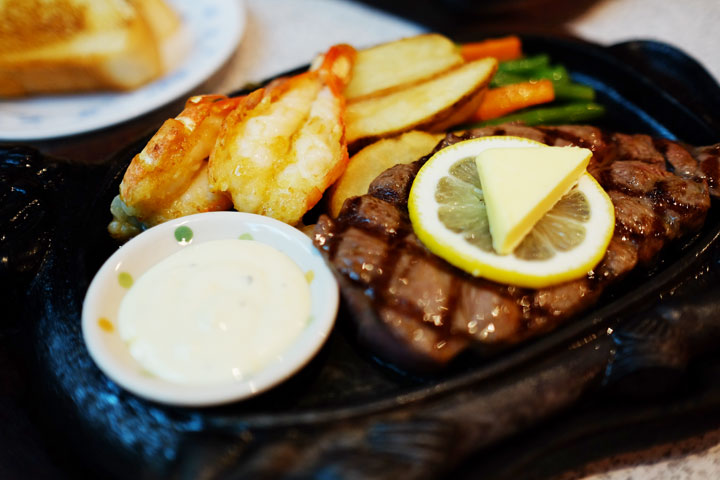