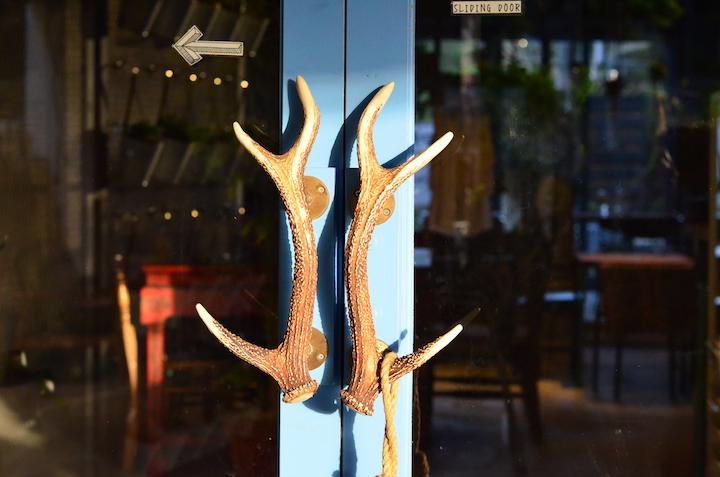 There’s a unique café in northern Okinawa Island that’s connected to a women’s clinic. This café is Unten Shokudo (the in-shop sign spells it Syokudo so I’ll use that spelling from here on). The café aims to fulfill our appetites and maintaining good health as we do so, and also to quench our intellectual curiosity. I want to introduce the café’s two big and distinctive features and one small characteristic that come together to meet these goals. The first big feature is that the café’s kitchen is run by the same team that runs the kitchen in the women’s clinic. The second, there are numerous specimen samples from various genres on display inside, which makes the café seem like a small natural history museum. The small characteristic, is that it breaks the stereotypical image of a women’s clinic in a good way, in how the establishment is a very welcoming spot for all. 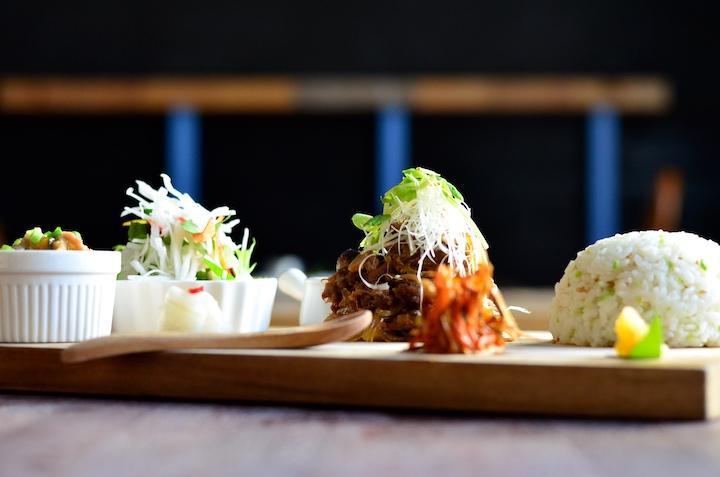 In opening the café, the owner, Mr. Shingo Unten, focused on the clinic’s kitchen which functions to provide meals for women admitted to the clinic. He says, “When it comes to cooking, you simply cannot lie. Was it prepared with care and attention? Or was it just thrown together with various shortcuts? The end result really speaks the truth.” The clinic’s kitchen is run under the care of his mother, who believes in sparing no time and effort to prepare dishes from scratch and eliminating ready-made items as much as possible. Mr. Unten explains, “The meals served at the clinic are for expectant mothers who are close to giving birth, so their meals are regular meals, not the general hospital foods. We want to prepare the meals with rich varieties of ingredients and for them to be not just well-balanced and nutritious, but truly delicious. We want the women to feel good, both body and soul, after they eat our meals. The average hospital stay for a woman giving birth is four nights and five days and of course, during that time, the meals differ every time.” It was Mr. Unten’s idea to offer the same healthy and delicious meals from the clinic at his café. This became their most popular, “Daily Lunch Special” (950 yen). 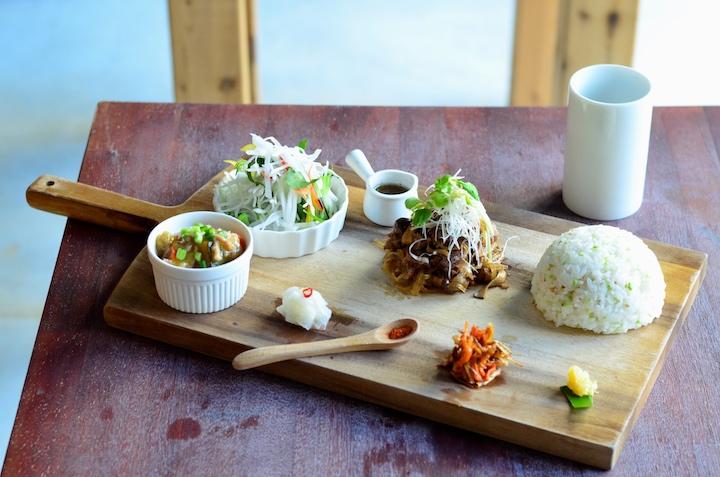 On the day I went, their lunch special included tender beef rib stew, seasonal vegetables with thick sauce, Japanese style salad with crunchy daikon radish, vegetables prepared kinpira style with mayonnaise, miso soup, rice with edamame, yakumi spices and pickles. The ingredients for the main and side dishes like the salads change daily, with 30 variations for the lunch specials. 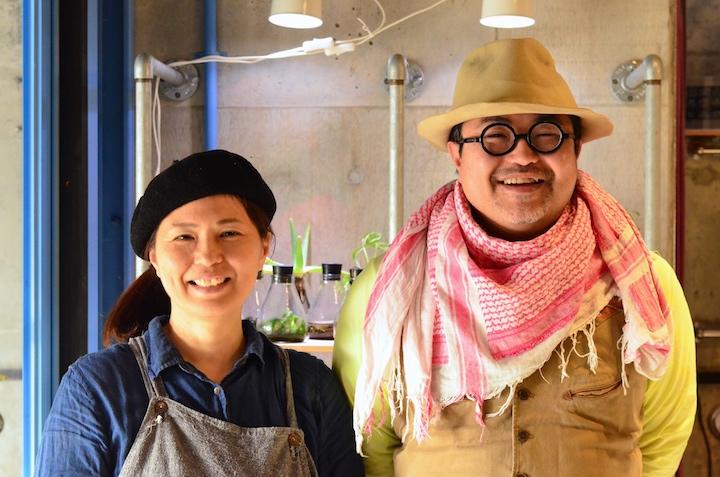 Besides the lunch special, their menu also offers curry, taco rice, and Sicilian rice. “We chose the two dishes that seven or eight people out of ten would want to eat, the national favorite curry, and the prefectural favorite, the taco rice. Of course, they’re prepared with our original touches. Since we have a lot of local customers, we wanted to introduce a dish that wasn’t familiarly local, and we tried a lot of different types from various places. We had a hard time settling on one dish, but in the end, we chose the Sicilian rice, a local favorite in Saga Prefecture because it was simply delicious,” explains Mr. Unten. 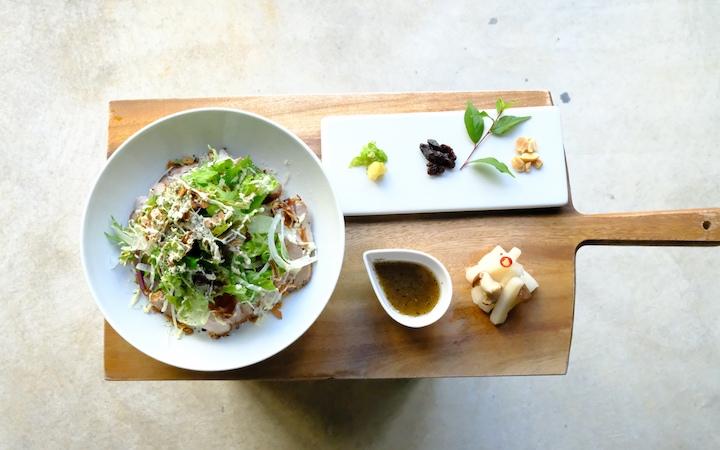 Sicilian rice has the rice on the bottom and topped with beef and vegetables, and finished with an Italian dressing and mayonnaise. At Unten Syokudo, the popular dish from Saga is prepared Okinawan style, with sweet and spicy pork rather than beef. It’s also topped with plenty of vegetables, raisins, nuts, and salted lemon. As hoped, the refreshing dish was a hit with the customers from day one. 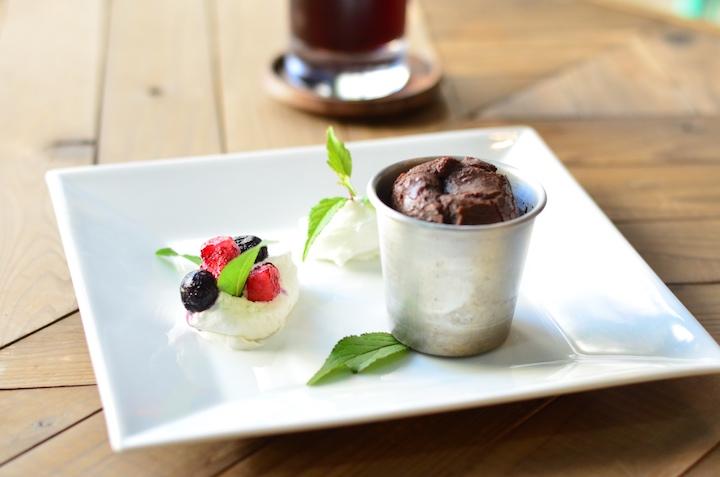 Their “Nankotsu Soki Curry Rice” (880 yen) is also arranged with an Okinawan touch, with Nankotsu Soki, or broiled pork cartilage. At the Unten Women’s Clinic, the European style curry was very popular, but at Unten Syokudo, they came up with a whole different recipe. Together with his partner Sayako, Mr. Unten finally came up with the taste he was pursuing. The curry, he says, is a masterpiece. Their “Chicken Taco Rice” (880 yen) is topped with every Okinawan’s favorite, roast chicken, and is delightfully different and very delicious. “In the future, I want to come up with a great dish using goat meat, a traditional ingredient in Okinawan food” Mr. Unten enthusiastically shares, as he brought the next item. It was the Fondant au Chocolat, fresh out of the oven after about 10 minutes of baking time. The chocolate cake, by the way, was to die for. Their banana cake and soufflé are also popular with the customers, both of which are favorites at the women’s clinic, too. 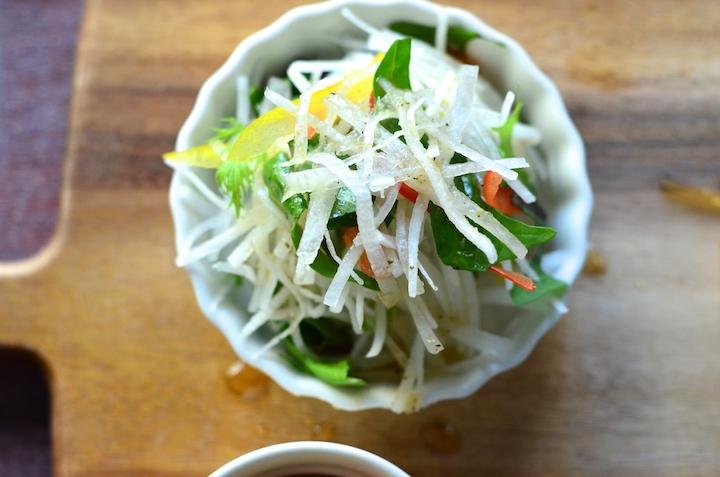 “Just as important to us to spare no time and effort in the preparation of our dishes, is the quality of our ingredients. We want to use the best of what we can get,” he also explains. Mr. Unten places great importance on building relationships with the farmers he procures his produce from, and getting to know the people who grow the food he uses at his café. One of these growers is Mr. Yoshitaka Mori, who he met about half a year ago. 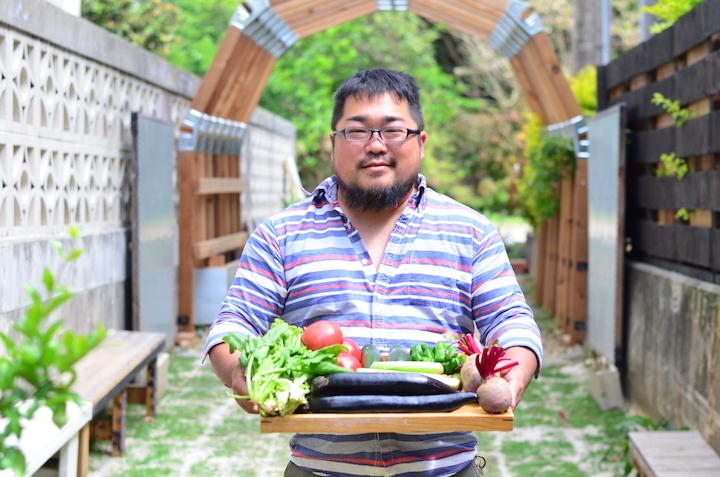 “I was eating at a café owned by a friend, and the vegetables in the sandwich were so delicious. I asked my friend who he gets his vegetables from. And that was Mr. Mori. He had moved to Okinawa from Shizuoka four years ago, and he grows his produce mostly in the natural farming method. He doesn’t simply eliminate the chemicals in his farming methods, but nurtures the natural strengths of the environment and the plants themselves to grow,” he explains. “My policy is to put together foods grown by people I sincerely respect, in their work ethics and lifestyles. Mr. Mori has his own values, and he shares those values with others. To be able to share your values with others, I feel, really tells me that he takes pride in what he does.” 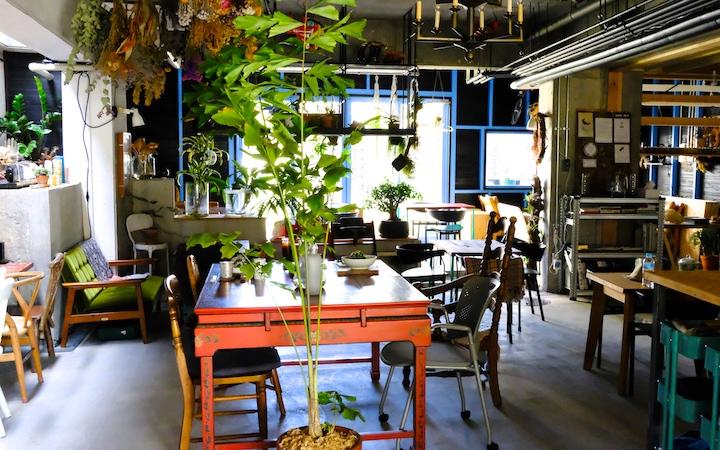 Mr. Unten is also particular about other things, too. For example, the Shikwasa Soda. It’s common for Shikwasa ciders to be prepared in the kitchen upon ordering, with shikwasa juice mixed with soda sold in bulk, then brought to your table. At his café, the shikwasa juice is served separately with the 200ml glass-bottled soda. “It costs more and takes more time, but I want my customers to enjoy everything detail as much as possible,” he says. His thoughts, care, and attention are the foundation to the unique café and the atmosphere here. On the cover of the menu, it says, “I dedicate this place first to my beloved daughter. Then, to you and me, who have not quite matured yet.” Mr. Unten says, “For the kids to be excited, for them to be thrilled about something. For the kids to be intrigued and interested, that’s what makes me the happiest.” As he says this, he looks more thrilled and excited than anybody. 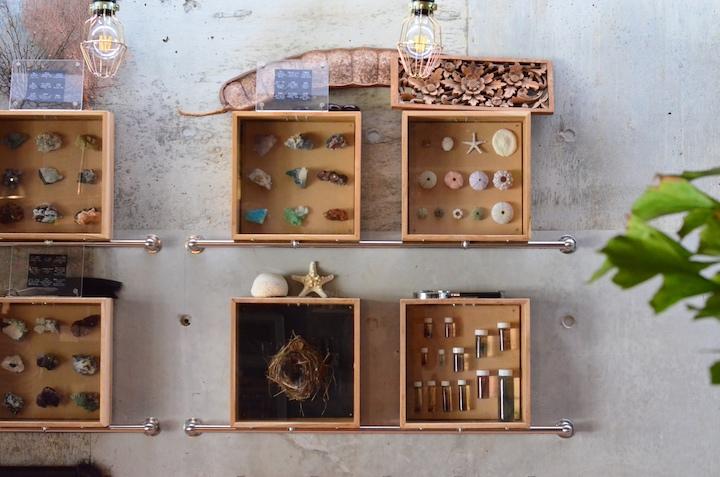 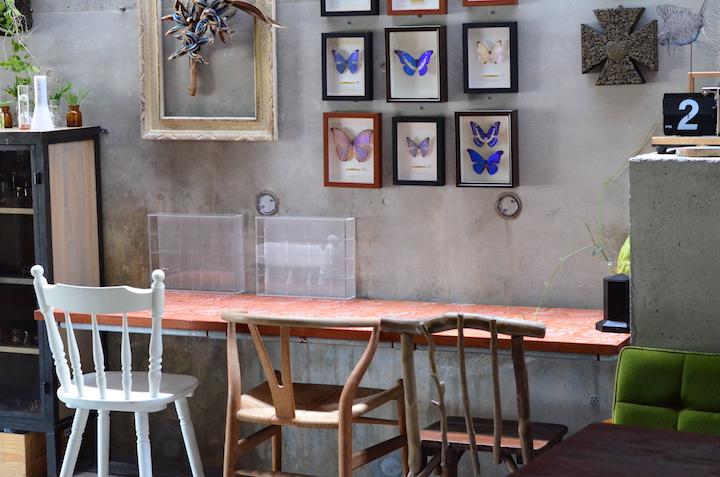 “I first became interested in museums when I was in elementary school. My brother, who is three years older than me, was really into insects, and with his influence, I became passionate about insects too, and fishing. As I grew up, the passion ceased, but about ten years ago, I again got interested in the formative arts and beauty of nature…the details, the full, completed beauty in design, just captivates me…With a newly found interest in plants on top of that, I started collecting visually interesting and beautiful things as a hobby. Then when I was preparing to open my café, I wanted to create a place where children and adults can all enjoy the atmosphere, just like works of art.” 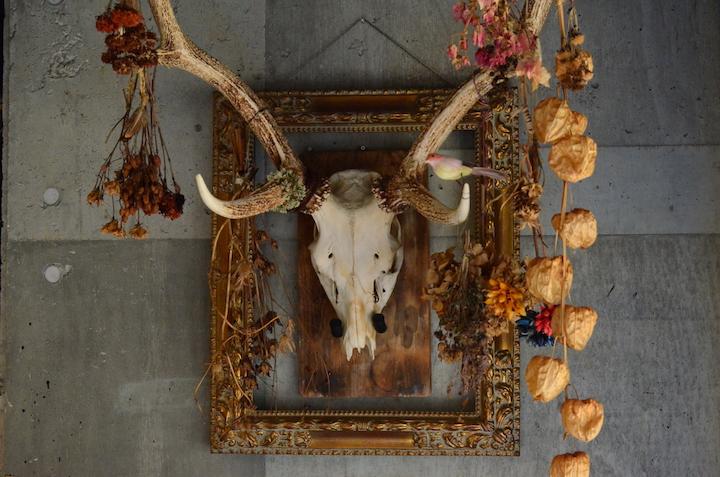 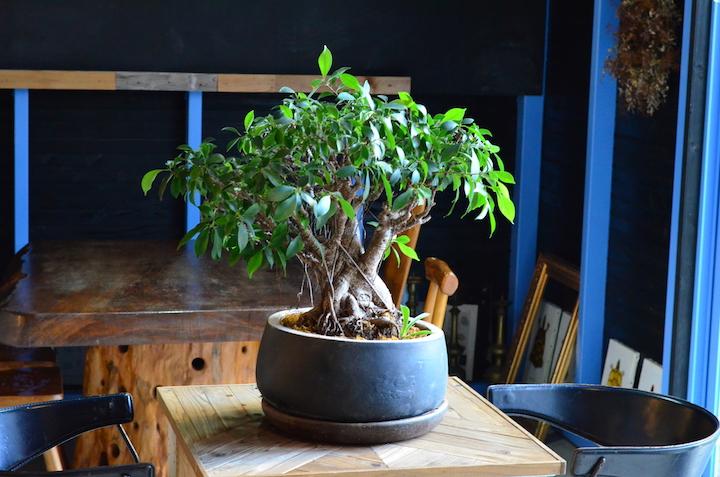 I asked him which were his favorite pieces displayed in his shop, and as he points to the deer skull, he says, “Honestly, I thought that maybe it wasn’t exactly fitting for a café, but, I didn’t put it up carelessly, without thinking. I really think that a skull lets us feel both life and death, and is actually, truly beautiful.” He then introduces his second choice, the Sakishima banyan growing in a pot. Unlike the common banyan tree, this small banyan has fewer leaves, and was apparently one of his grandmother’s cherished pieces. She cared for the plant for almost three decades before his elder brother took care of it as his home, and Mr. Unten begged him for it. I mean this in a really good way, but Mr. Unten is certainly a very unique character. 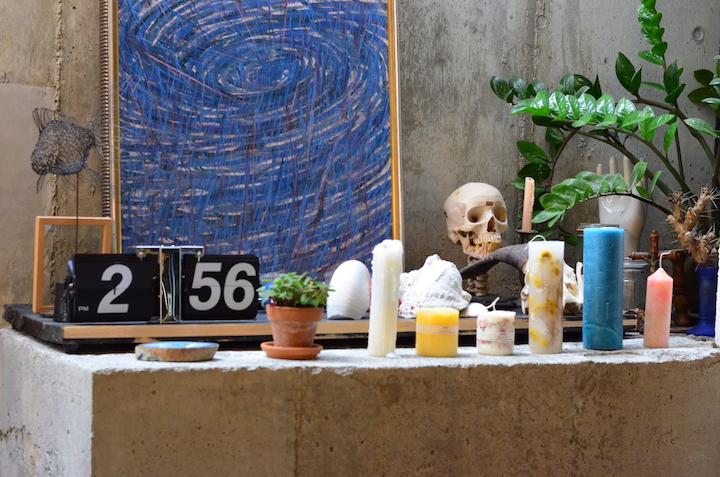 “I grew up with people around me saying that I was ‘different’. Over time, being ‘different’ was just a part of being myself. To tell you the truth, I didn’t go to high school. It’s not that I disliked studying…Anyway, as time went by, I began to accept that I was different, and that it was a positive thing. I felt that people with particular ways were far more interesting than the average person, and things created by such individuals were really very interesting. That said, what I thought to be interesting may not be what my customers find interesting, and that, really wasn’t going to work here. Honestly, I was worried that people weren’t going understand or share my enthusiasm. So in preparing the café, I always make sure I ask my wife and staff for their opinions so I can keep a good balance. I’ve learned that basing decisions solely on my own opinions is, well, dangerous, and when the staff say, ‘you really shouldn’t,’ I really try not to display those,” chuckles Mr. Unten.

“I’m a type of person who acts on my intuition and senses, and come up with the reasons afterwards. The shop, too, I never really had a clear vision or a set plan for it,” analyzes Mr. Unten. In closing, when asked what kind of place he wants his shop to be in the future, his response was, “Maybe it’s cliché, but I just want to provide delicious food, and offer a space that’s fun and interesting. If people can feel a little happier here, that’s all I really want.” 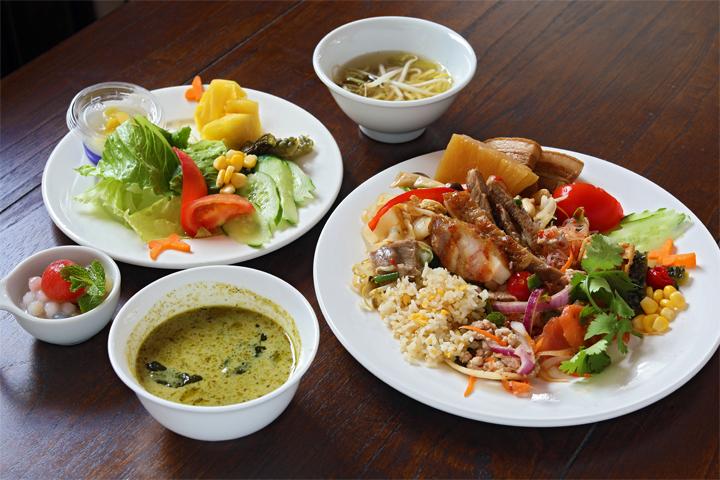 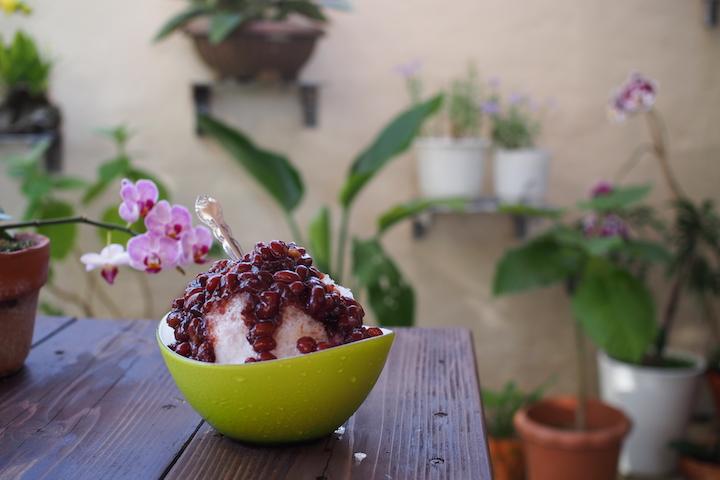 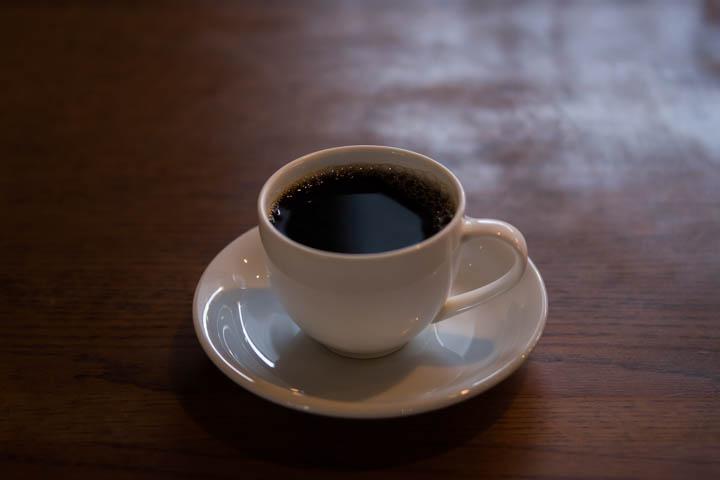 A Cup of Coffee Offered at “Tettoh Coffee,” by a Passionate Coffee Roaster 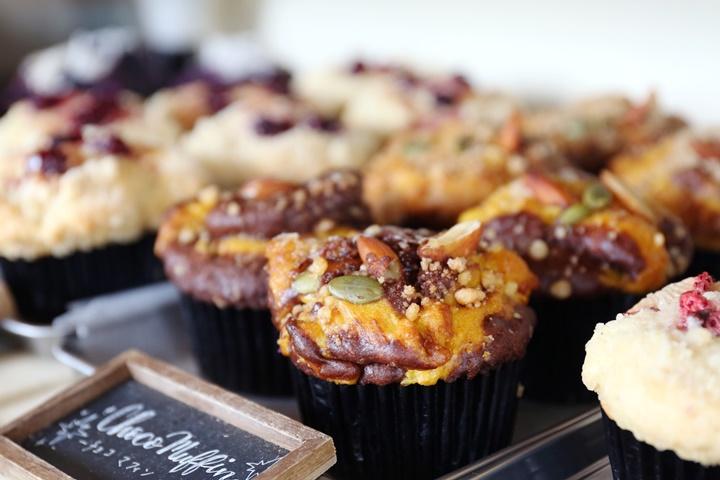 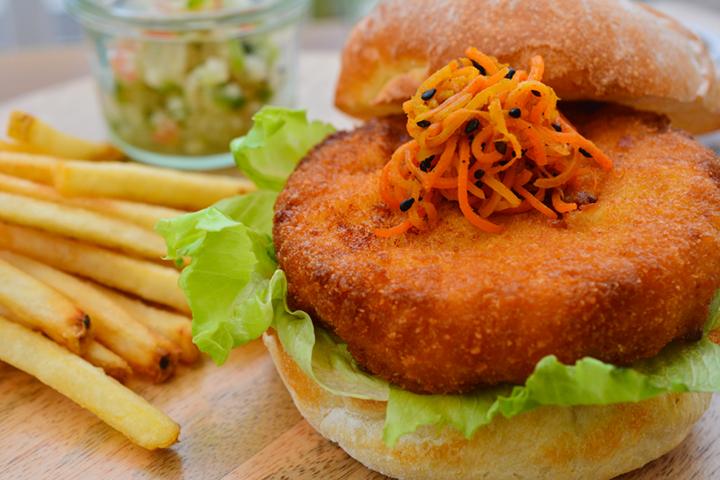