“Cheese in Okinawa?” You May Have Thought It Wasn’t Possible. John, The Cheese Guy, Offers Amazingly Delicious Cheese at The Cheese Shop (Nanjo City) 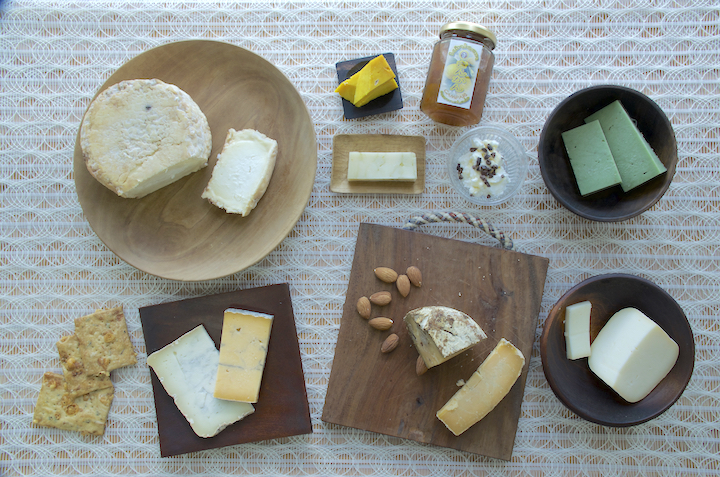 A while back, a friend of mine said to me, “Apparently, cheese made in Okinawa is making a splash among cheese lovers recently…” The first thing that came to my mind was goat cheese made in Nakagusuku Village. That’s because no matter where you are in Okinawa, near the city of Naha or on the small outer islands in the Yaeyamas, goats are a part of life and landscape. 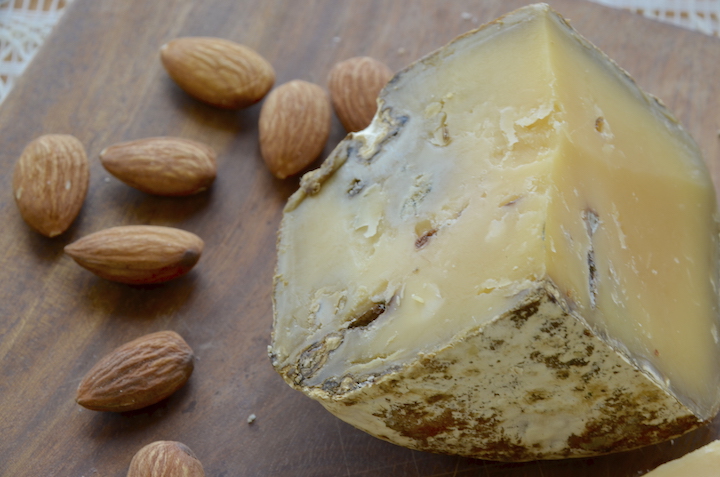 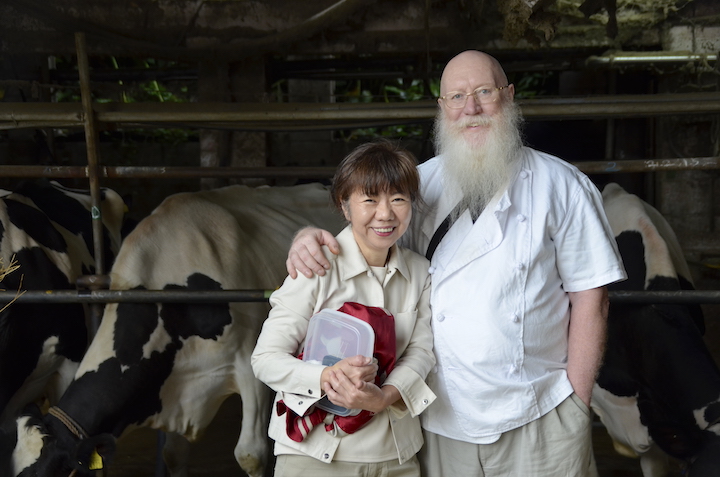 As my friend continued to tell me, I realized I was wrong. This friend told me about how the cheese was made with cow’s milk, and what’s more, they were real, authentic gourmet cheese, like camembert, blue cheese, and even Roquefort cheese. This definitely got my attention, and I had to try some.

The person producing these wonderfully delicious cheeses in Okinawa is John (a.k.a. The Cheese Guy), an English gentleman with a fluffy cloudlike beard. 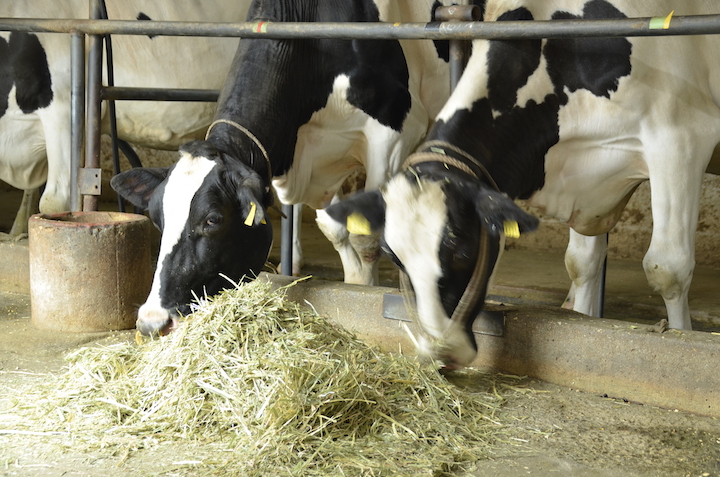 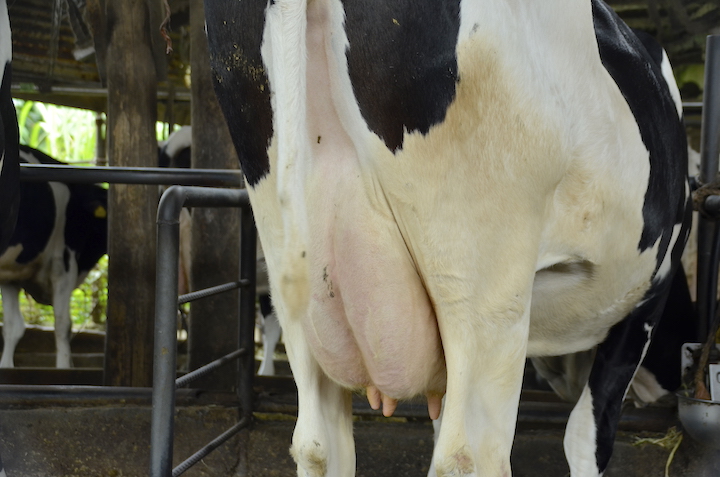 The milk used to make John’s cheese is from the dairy cows nurtured by Kiyoshi Oyadomari, who mixes effective microorganisms in the feed. The Oyadomari dairy farm is located in the serene countryside within Nanjo City, where the cows graze lazily in this stress-free environment.

“In one corner of the dairy farm is the factory where I make the cheese. This allows me to get the freshest milk whenever I need it,” explains John. The fresh and aromatic milk is pasteurized by the Cheese Guy himself. The best temperature and time, he says, is 63 degrees for 30 minutes. 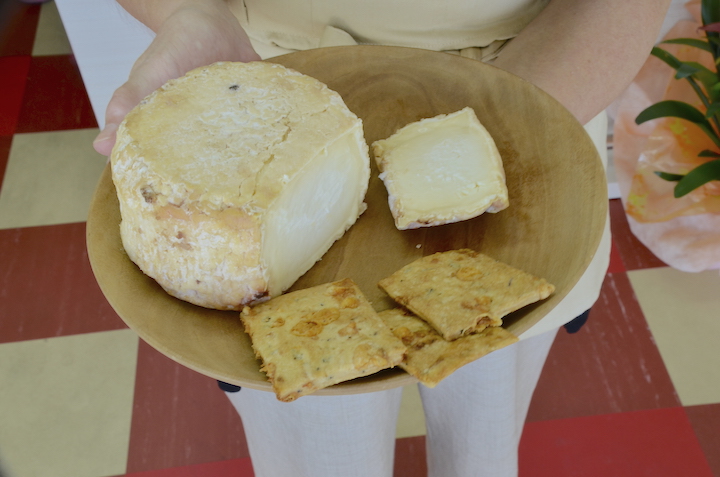 Some of the recommended cheeses by John are those named after communities within Nanjo City, which offer the distinctive local flavors.

For example, the Wakinaguni Blue is named after where the dairy farm and factory are located, an area with a long history. The name means “where the rice grows.” Just like the location where it’s produced, the cheese is gentle and mild, and is a very tasteful blue cheese. 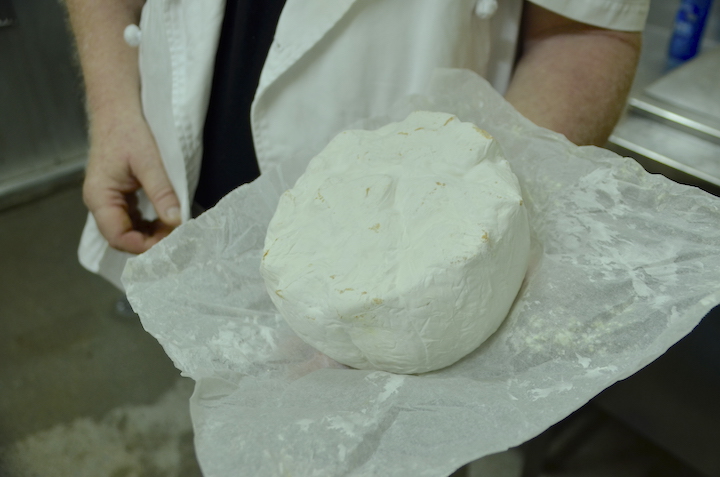 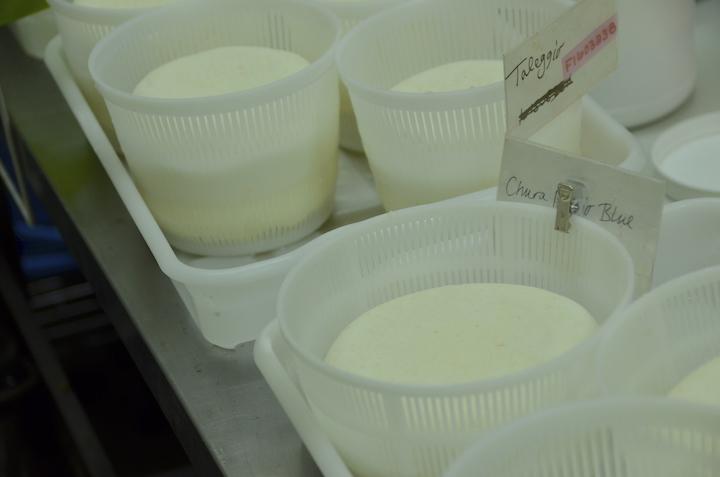 Their most popular cheese is the Ozato White, a creamy cheese with a white mold surface. It’s named after where the cheese is made, in Ozato district.

Just as popular is the Chura Nanjo, a mild cheese with a gentle nutty aroma. This cheese is also delicious and pleasant.

John produces other cheeses that offer the tastes particular to the area, such as the Cheese-Yo made by rice koji mold and Awamori fermentation. 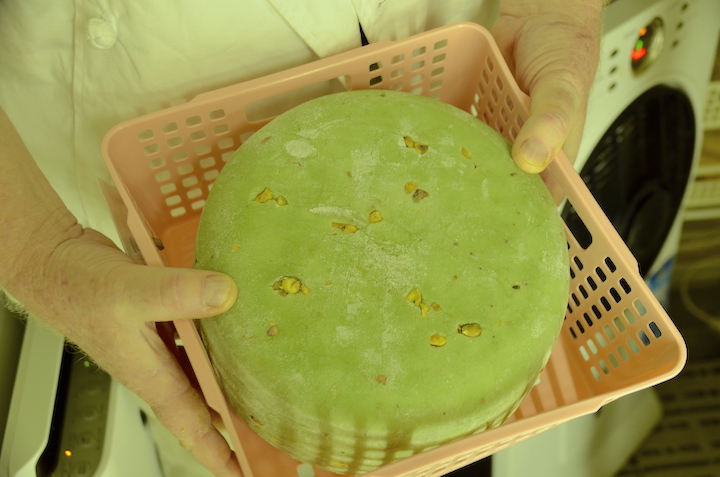 I asked him why he started making cheese here in Okinawa.

“Once I started living in Japan, it was hard to get the cheeses I wanted. So I decided, I’ll make it myself!”

Before starting to make cheese, he first made Tofuyo, a traditional Okinawan delicacy which is commonly described as tofu-cheese, a fermented dish that’s deeply rooted in Okinawa’s food culture. John’s tofuyo was successful and his friends loved it. 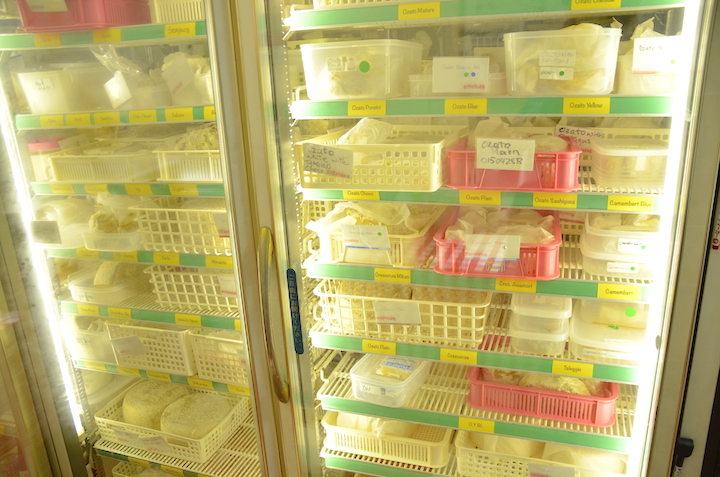 This confirmed to John that fermentation was possible even in the subtropical climate of Okinawa. So John set out to make cheddar cheese, one of the most popular cheeses from his home country of England. As soon as he was able to reach the quality that he was fully happy with, he went on to trying a different type. He repeated this process and in no time, the variation expanded to 70 different types of cheese. 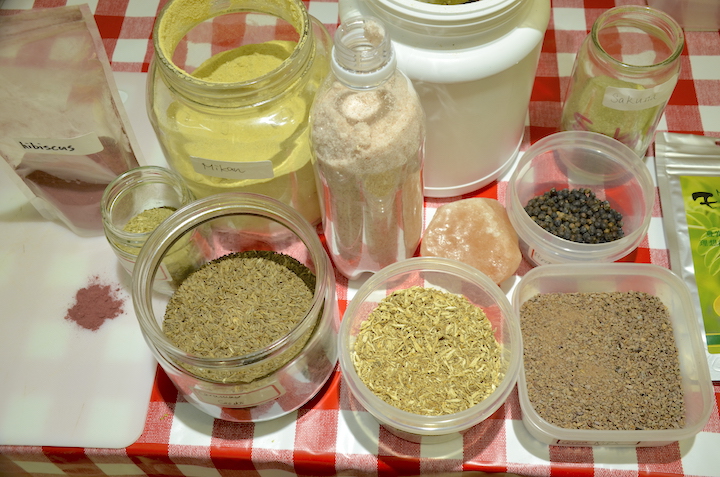 Stocked at his factory are various local herbs like mugwart (fuuchiba), Chomei-so (Peucedanum japonicum), turmeric, and hibiscus, as well as others like hops, mushrooms and other fungi. These ingredients are used to add variation of wonderful flavors to his wide selection of cheeses. 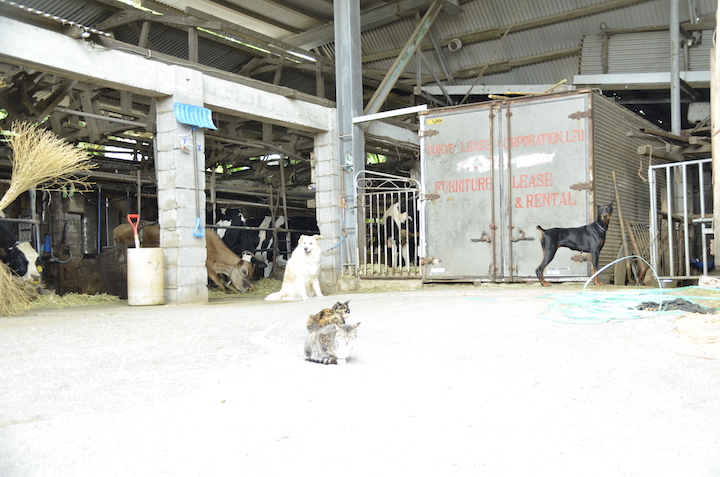 In his charmingly expressive manner, John talked about his impression of Okinawa upon moving here from Hokkaido.

“Everything here, including the animals and plants, are all full of energy, he says.

"Where nature is lively, bacteria is lively. Even if you use the same milk and the same production methods, the cheese can turn out different according to where it’s produced.”

Cheese is made by the location and people. He explained to me that you have to pay close attention to the temperature, humidity, and other conditions throughout the process and to nurture the cheese with great care. 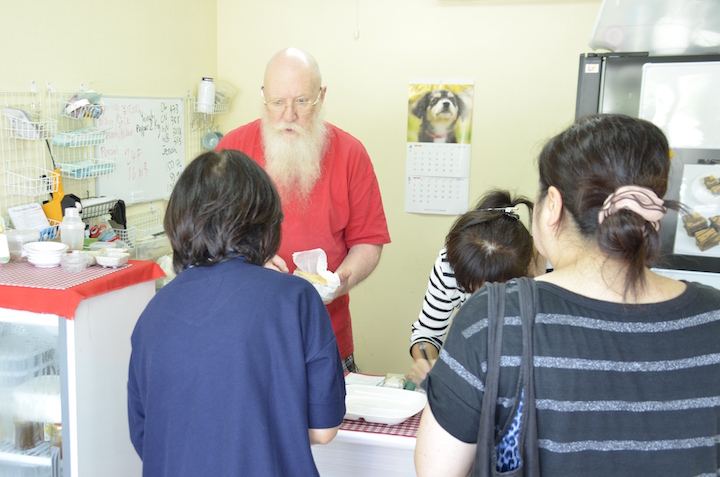 “The cheeses I make are like my daughters. I don’t really want to sell them.”

John grew up enjoying cheese and he’s come across numerous types along the way, and fell in love with many of them. His love for cheese is unquestionable, and once you get him talking about cheese, it’s hard to stop him. 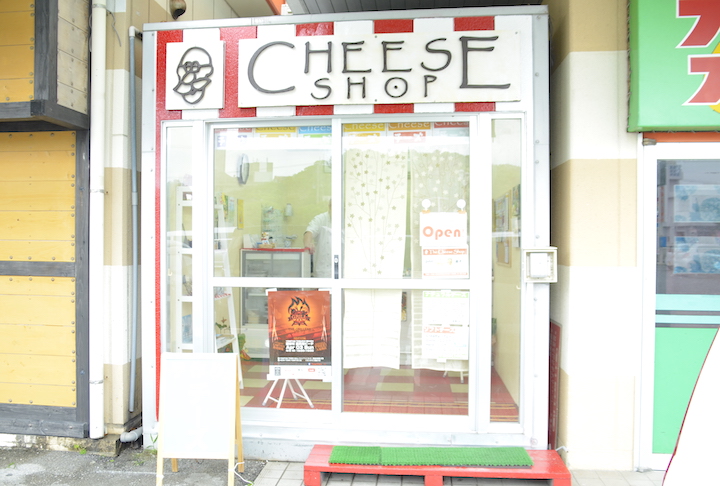 The Cheese Shop is the place you want to go to find the cheese you’re looking for. While there, you can enjoy talking about all the great kinds of cheese that you’ve had or have yet to try, and also taste some of their recommended selections. It’s a wonderful place to enjoy great cheese and conversation, so take your time and enjoy their delightful cheeses. 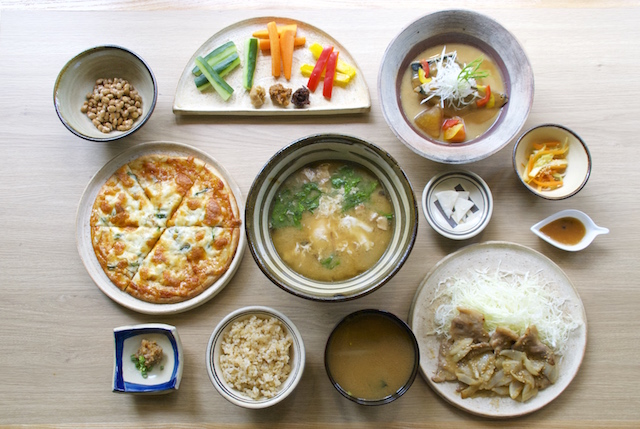 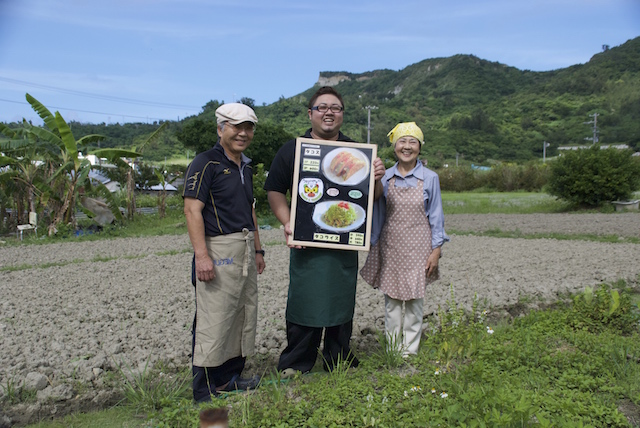 A Recommended Spot Not Found in Travel Guide Books So Far! Uchinoyamachi (in Nanjo City) Serves Up Excellent Tacos to Almost 100% Local Customers 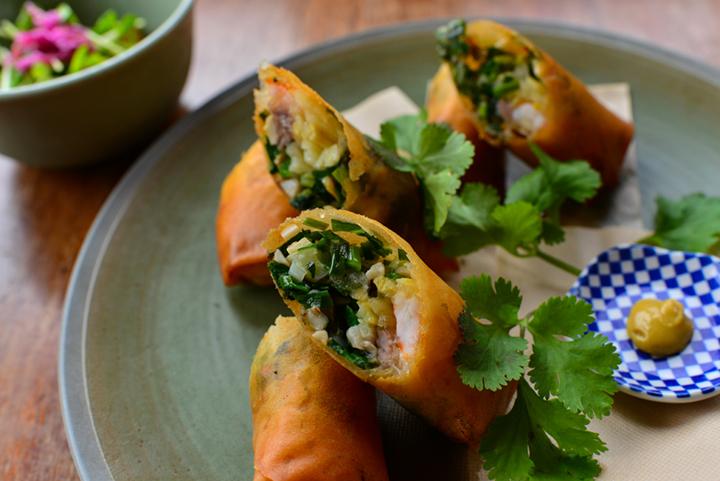 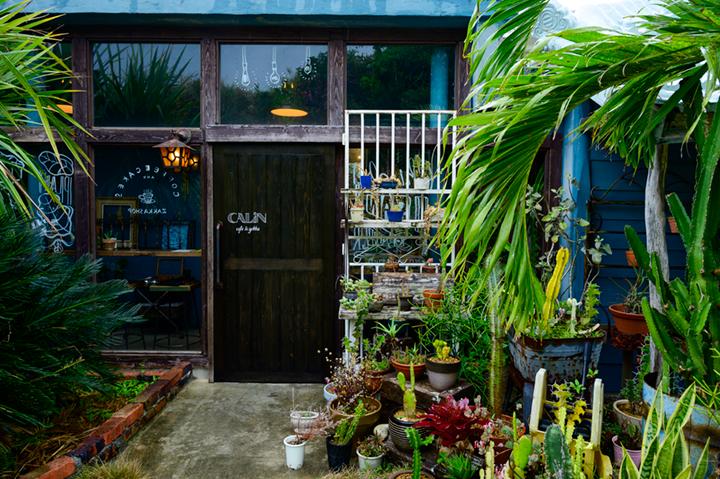