Focusing In on the Shishi (Lion) Preservation Society of Shiraho, Ishigaki Island

The lunar Obon in Yaeyama is famous for its unique traditional dance headed by the masked Angama which we can only see in that particular region. Of course, the ceremonial group dance is most definitely an interesting and exotic tradition that’s well worth seeing, but there’s also another event that I make a point of going to see every year. That’s the Shishimai (lion dance) held in the district of Shiraho on Ishigaki Island.

Shiraho is situated near the Painushima Ishigaki Airport, and the peaceful and beautiful community that stands facing the calming seas are lined with many traditional homes with red tiled roofs that are surrounded by stone walls. On the nights of Obon according to the lunar calendar known as Kyu-Bon, homes in the community are visited by the Shishi lions, offering dances for the ancestors of the home to forever rest in peace. Shiraho is the only place in Yaeyama that has Shishimai dancing during the several days of Kyu-Bon. Every year, people gather from not just within the community but from other towns to see the beautiful tradition of the Shiraho Shishimai dance. 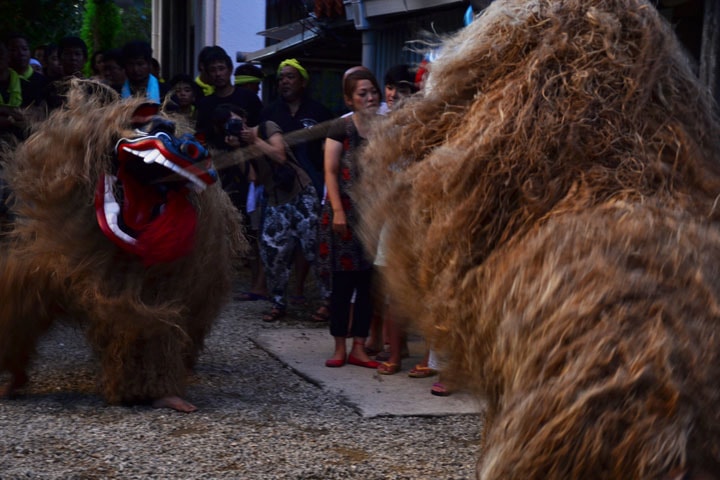 When I first witnessed the Shishimai dance in Shiraho, I was taken aback from all that I saw and felt; the dynamic movements of the Shishimai, the sight of all the people young and old mesmerized by the performances, the passion of the men dancing the Shishimai, the sounds of the Sanshin and flutes that echoed majestically throughout the settlement in the darkness of night. Everything about the Shiraho Shishimai just simply took my heart away. For several years, I’ve been wanting to interview the very people that make this event possible. They are the Shiraho Shishimai Preservation Society made up of approximately 50 members known as Shishibusa, who are the Shishimai dancers. The Shishibusa range in age from junior high school age who apprentice under the very experienced adults in the group. I had the good fortune of interviewing them this year.

The Shishimai lion walks on four legs and has a furry body. You can see its belly move as it breathes, and it reacts when you call it. At times, it displays a show of force, and also shows various emotions as it moves among the people, from house to house. In my imagination, it looks as though it makes the mountains of Ishigaki its home and on some occasions, it makes rare appearances in the villages. 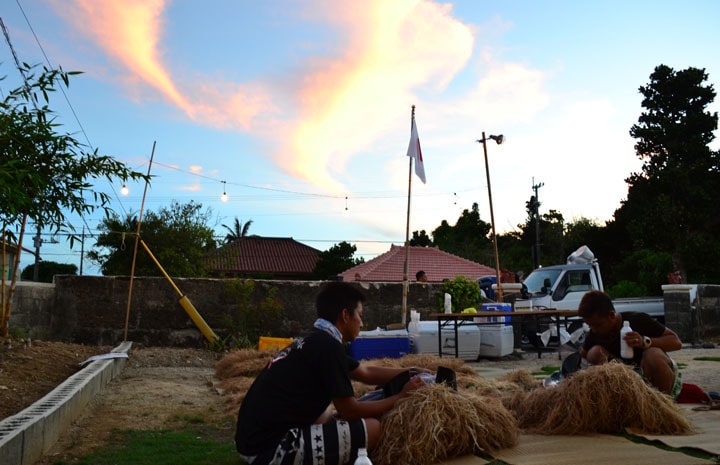 The first night of Kyu-Bon is known as the day to welcome the spirits of the ancestors to the homes. In the early evening on this day, people begin to gather at one particular home. Referred to as Meire (pronounced may-re), this is the Miyara family residence, the head household of the Shiraho Shishi. Every year, a ritual is conducted at the Meire residence to kick off the Shishimai dance, and a closing ritual is held in the early morning hours at the end of Kyu-Bon to close the four-day event. Once the ritual is complete on the first day, the Shishi lions set out to visit the homes that they have been invited to. On the year that I went (2016), the Shishimai was held at 30 or so homes. 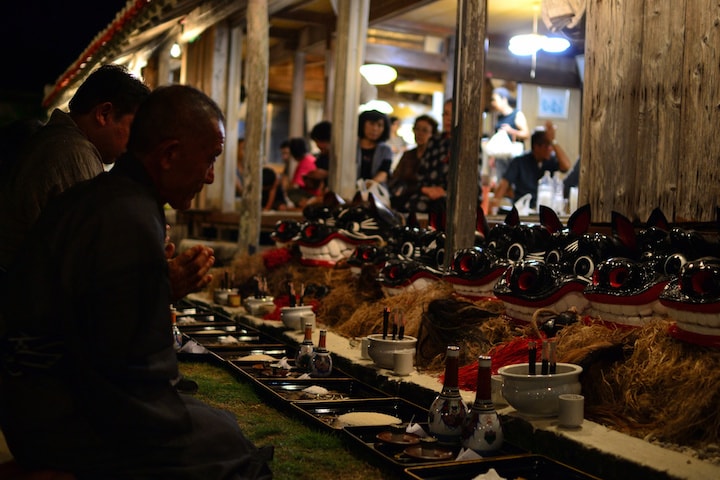 The children of Shiraho love the Shishimai. On some nights, the Shishimai dance continues past midnight, but even then, children excitedly follow the procession of people and dancers. When close enough, the kids almost always hold up their hands and fingers in front of the Shishi’s face, and tempt it with the chanting, “Rei-ru-re, rei-ru-re.” They know that if they tease the Shishi enough, it’ll try to bite them and tug on them. The Yamangu (mischievous) boys continue to tease the Shishi lion as the adults watch and burst in laughter. 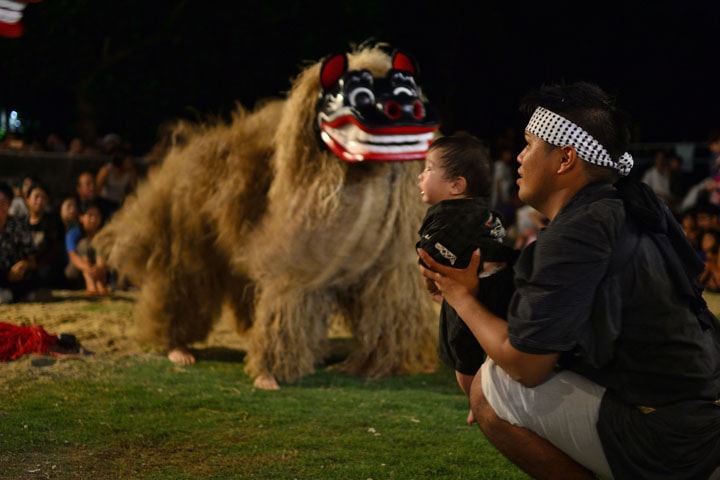 There’s an interesting traditional practice by the Shishimai at Shiraho. The Shishi lion “swallows” infants from its large mouth, and then the child is taken out from its stomach. Some babies look stunned, wide-eyed and mouths open, and others wail and cry. This tradition is done with the hopes and prayers for the child to grow up healthy, and it is believed that the “swallowed” child will enjoy good health and lead a long life. As the parents look on as their children get swallowed, they smile gently, glowing with love and good wishes for their kids. 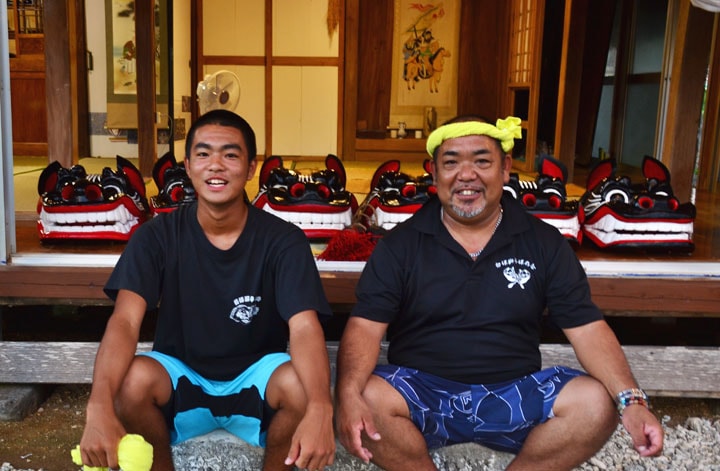 The chairman of the preservation society is the fifth generation in the line of chairmen, Koichi Akamine. His son, Kota, who’s in his third and final year at junior high school, is presently apprenticing. Just last year, Kota made his debut in performing the parent-child Shishimai dance.

The oldest member is Mr. Yasuhisa Miyara, who has played the role as the Shishi driver for approximately 35 years. He says there must have been over 300 babies that he let the Shishi swallow in those years. Miyara-san, who the members lovingly call “Yasubo-Ni” or Brother Yasubo says, “I was the one that let the Shishi swallow Shogo and Naka, too!” It turns out, Baby Shogo and Baby Naka are now all grown up and are active participants in the preservation society. Shogo Nagama grew up always chasing the Shishi lion and hoped to be a Shishibusa one day. He joined the society when he started junior high school, and he’s been a part of the activities for the last 15 years.

What is it about the Shishimai that attracts and captures the hearts of people from such a wide age range? 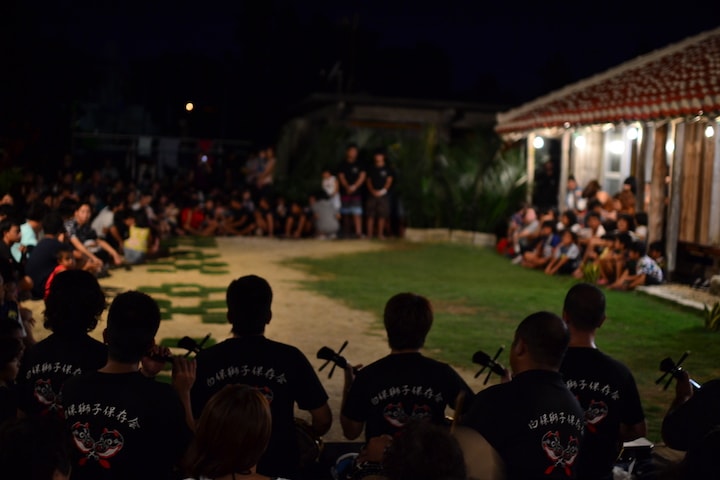 At the ritual held at Meire on the final night, crowds of people gather in the large yard, and more people stand along the surrounding walls of the residence. Although the time is almost 10 in the evening, many people still gather here to see the final Shishimai dance. As the crowds wait, the warm sounds of the Sanshin starts to fill the night air, and the Shishi lion makes its appearance from the grassy area. 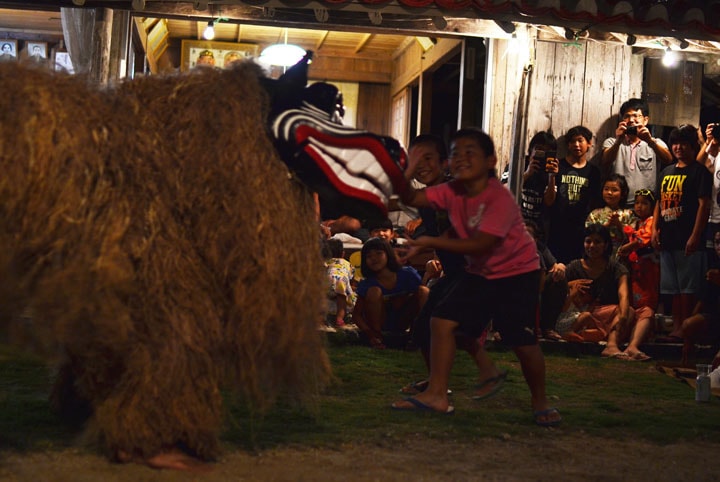 The ritual isn’t just a solemn affair, but children and adults alike jump in to accompany the Shishi as it dances for the crowds, and the evening is wrapped up in a lively manner. With all their roles complete, the preservation society members all look relieved and refreshed. Some of them are comfortably lost in their thoughts, saying, “Another summer is over.” 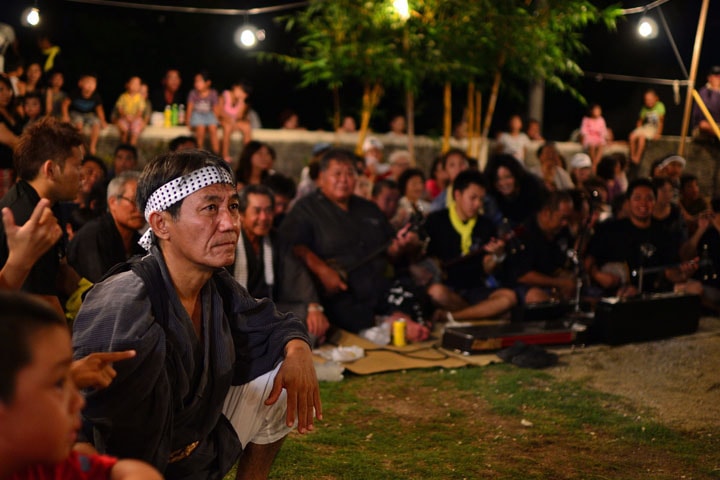 During the ritual, I saw a twinkle in the eyes of Miyara-san as he watched the Shishi lion closely. Performing the important role of Shishibusa for the ritual at that moment, were Nagama-san and Naka-san, the two that Miyara-san had guided the Shishi to swallow when they were babies. The Shishi “is a very, very important part of Shiraho.” And the members are proudly preserving its history and passing it on to the next generations.

After the finale, the people gathered for an after-party. Appointed to give a speech there was Naka-san, who reflected on the past four days of the event and wrapped up his talk with tears streaming down his face. It was the first time that he was chosen to play the important and honorable role in the ritual. The older members looked upon him with warmth and affection, like one big happy family. I was a little envious to witness such a bond amongst the people of the community, and was filled with heartwarming feelings as the night of the full moon got deeper. 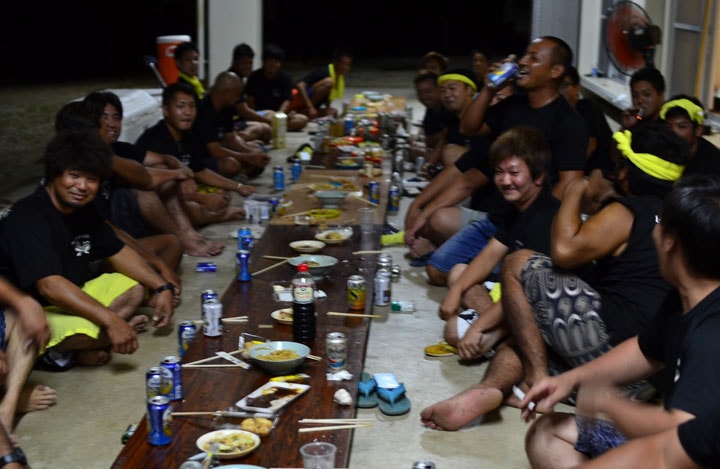 An article I wrote focusing on the Shiraho Shishimai Preservation Society was printed on the October (2016) issue of the local Yaeyama magazine, Gekkan Yaima, in a 12-page spread! If you get a chance, check it out!

Obon according to the lunar calendar this year will be on August 13, 14 and 15. The Shishimai dance will be held over four days from August 13 to 16. The Shishimai dancing is held in the yards and gardens of private homes, but visitors can also see and enjoy the festivities. If you’re going to be on Ishigaki Island during this period of Kyu-Bon, visit Shiraho to witness its wonderful culture! 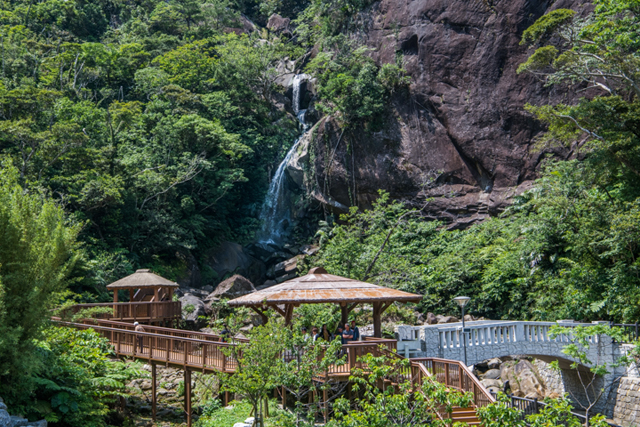 Dynamic but Safe, Even with the Increased Water Volume in the Rainy Season! Todoroki Waterfall is Recommended for a Day Trip with Family 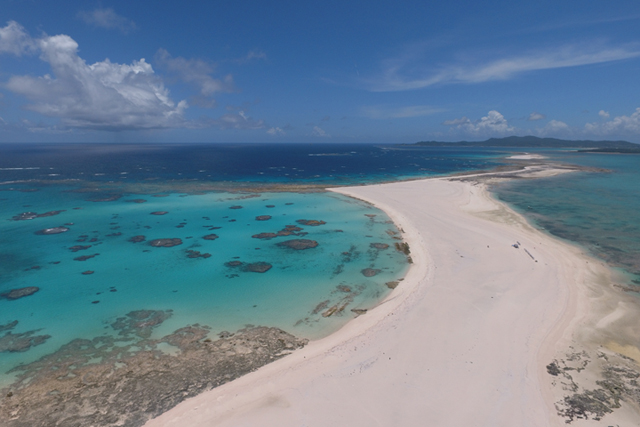 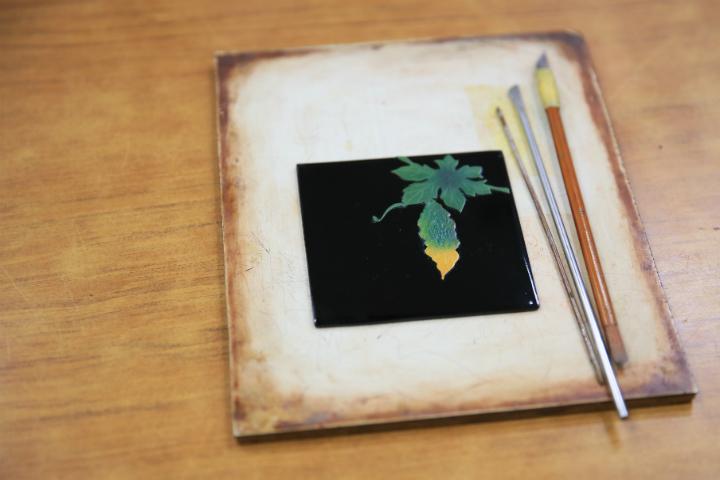 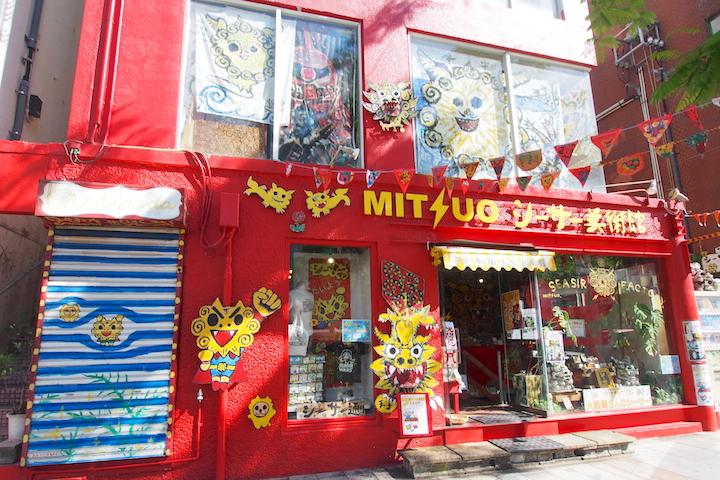 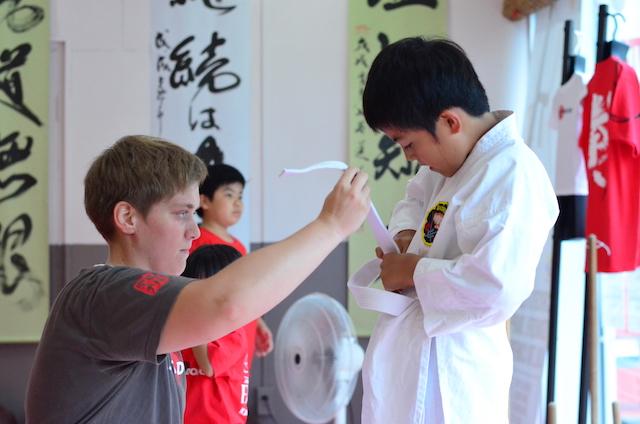