The south of the main island of Okinawa became a fierce battle site during the battle of Okinawa in the Pacific theatre during World War II.
“Peace Memorial Park” was constructed to pass down the tragedy of wartime and wish for world peace on Mabuni Hill, which is the last location of Japanese Military Headquarter.
The word “祈念 (kinen)” has a deep prayer for everlasting peace.

A red-tile roofed building that stands out in the spacious park is “Okinawa Prefectural Peace Memorial Museum.”
The fist floor has a hall, information library, etc. as a zone for looking toward the future.
The second floor has paid exhibition rooms to study the Battle of Okinawa deeply. 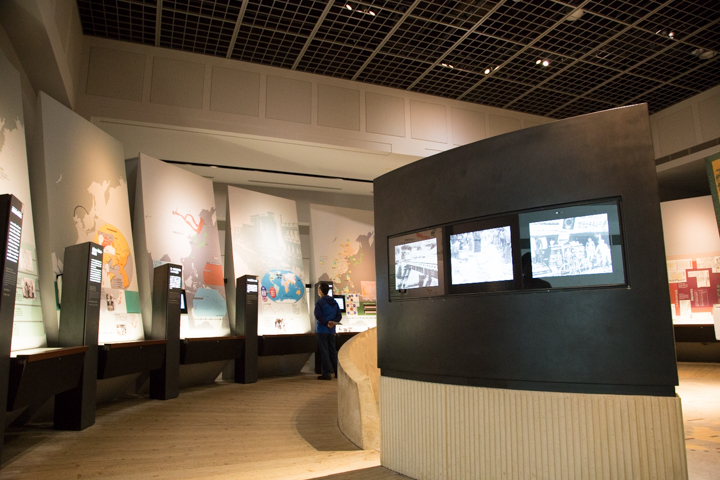 The exhibit rooms start with the history of Okinawa when it used to be the Ryukyu Kingdom. Then, you will learn about the major wars from Meiji period (1868-1912) to Showa Period (1926 -1989), and how U.S. Forces fought their way to the Battle of Okinawa. 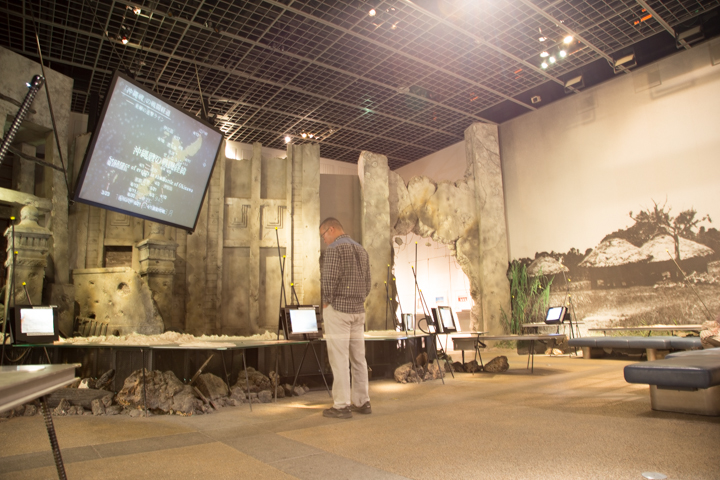 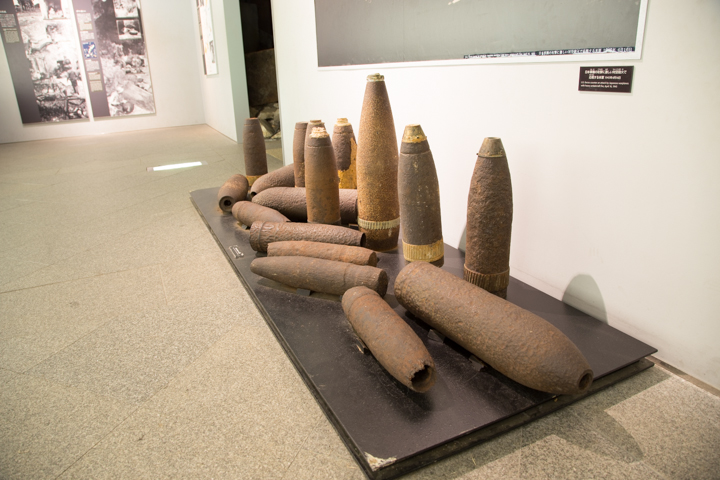 The big screen and videos show the footage during the war time and you can see bombshells that were actually used. 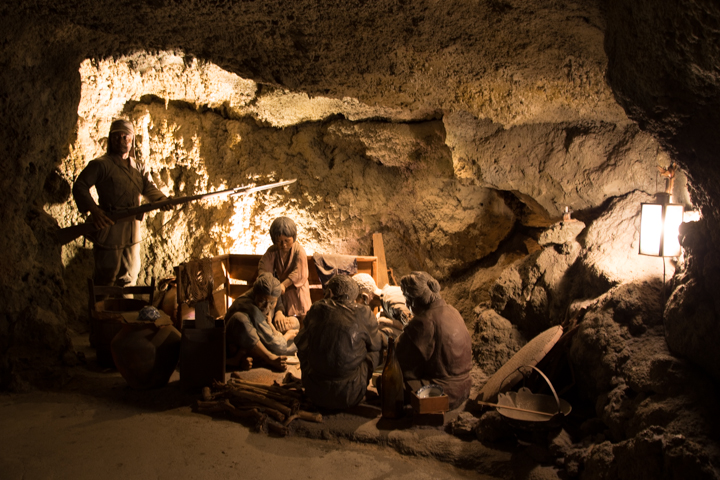 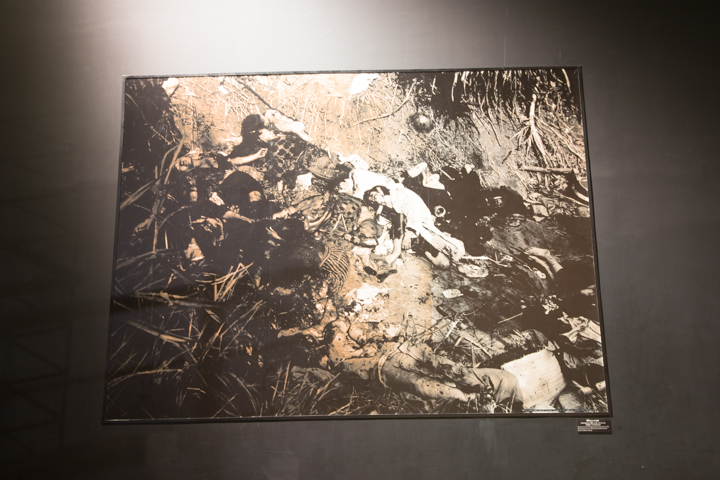 Tragedies happened in naturally-formed caves called “gama” are depicted by dolls in a life-sized diorama.  Photo panels shows people who lost their lives at the battle field. 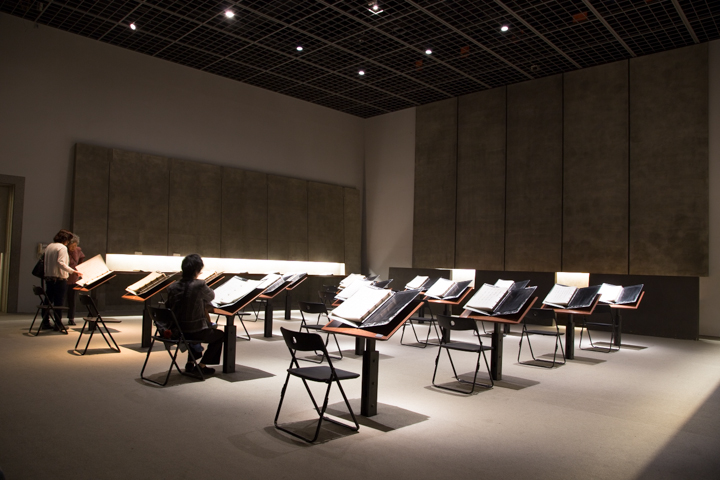 This is an important room where you can read and watch testimonies by war survivors in print and on videos. 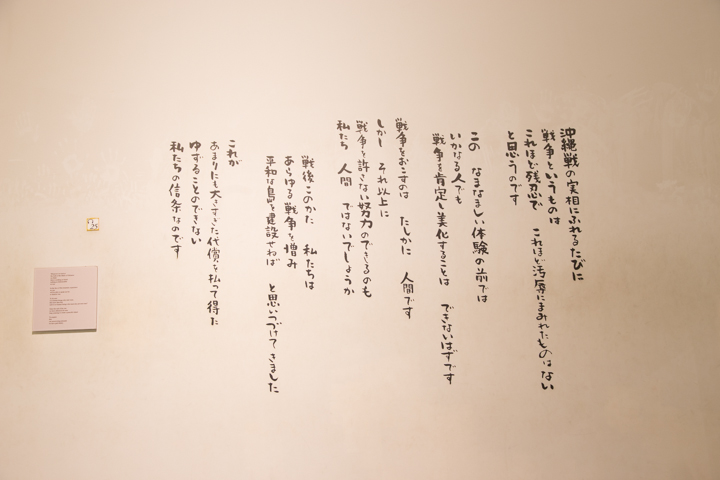 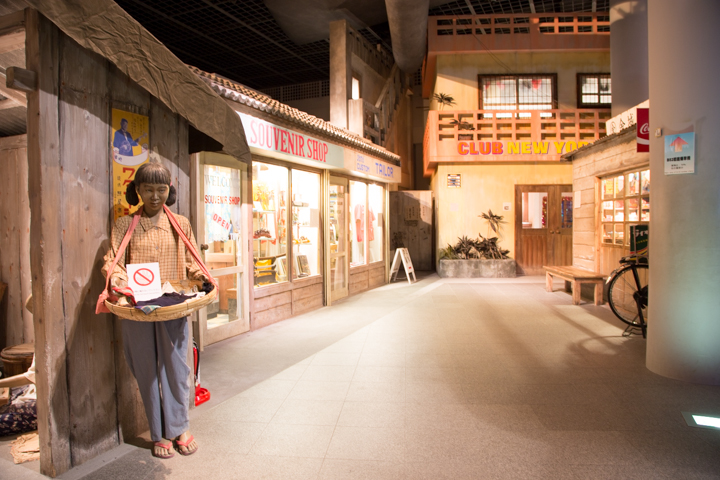 The last room describes life in the postwar refugee camps, the 27-year U.S. occupation period, and the movement for reversion of Okinawa to mainland Japan.
The exhibits show the actual situation of war that only Okinawa can tell and keeps the prayers for peace. 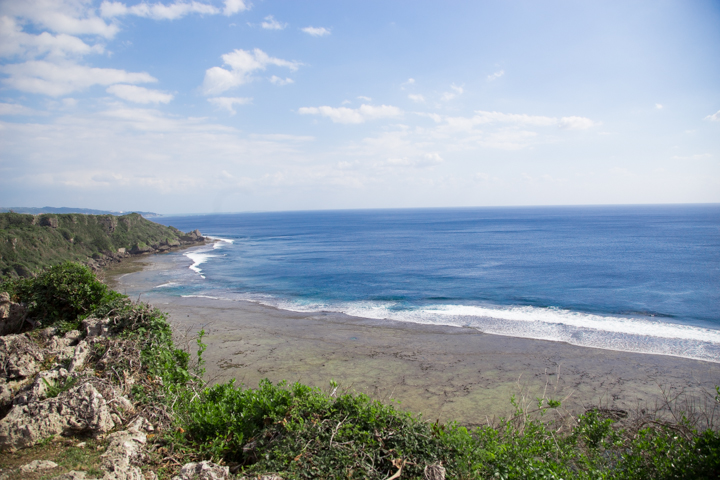 Going through the exhibit rooms that take the tragic history out of the shadows, you will find a stretch of beautiful water in front of you.
With a sense of relief, you will be comforted by white surfs, cobalt blue sky, and turquoise blue waters.
During the wartime, the water here was full of battleships, throwing artillery shells on the ground.
Looking over the clean, crystal blue water makes us realize how much we can relish our peaceful life now. 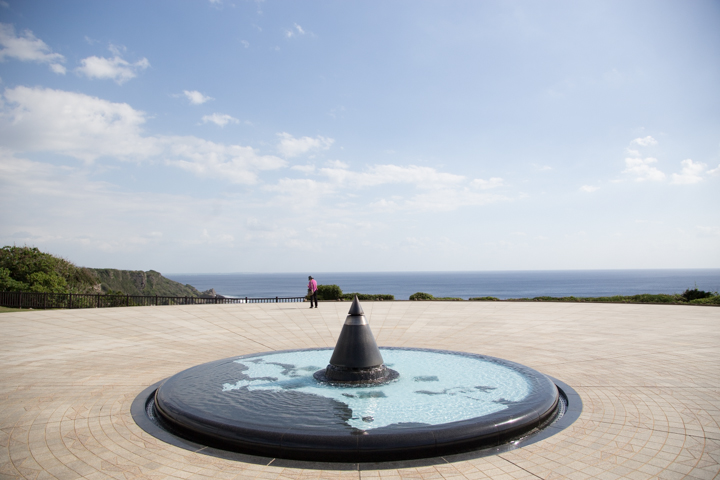 Leaving the museum and walking toward the ocean side, you will find “Peace Plaza,” where “Flame of Peace” has been burning at the center.
This flame is composed of flame of Aka Island, the first landing site of U.S. Forces in Okinawa, and “Flame of Peace” in Hiroshima City, the site of the first atomic bomb drop, and “Flame of Commitment” in Nagasaki City, the site of the second atomic bomb drop. 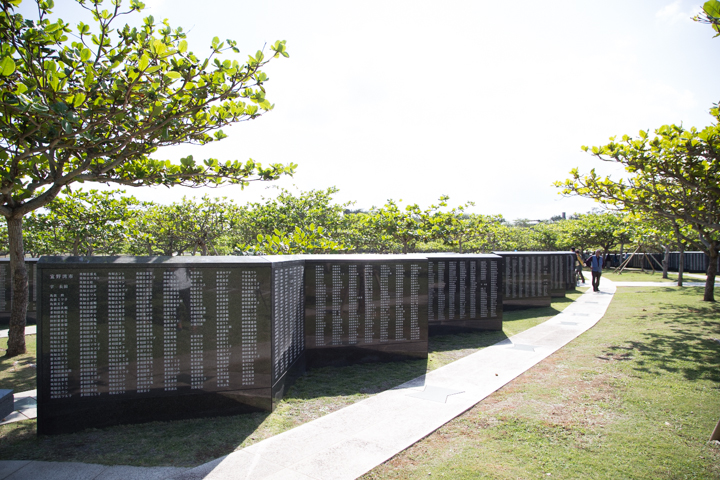 In front of the “Flame of Peace” is a stretch of lush green “Cornerstone of Peace.”
The cornerstone was erected to commemorate the 50th anniversary of the end of Battle of Okinawa.  Regardless of nationality and military or civilian status, all of the names of more than 240,000 war dead are inscribed here. 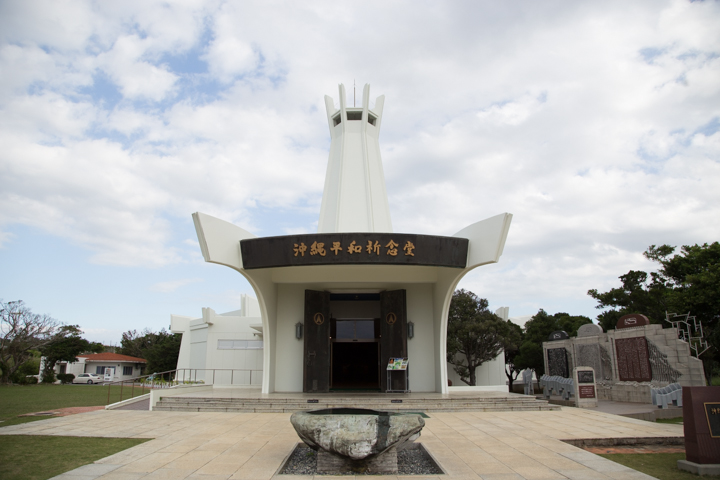 This is “Okinawa Peace Hall.”
The hall was open in 1978 as a symbol of the preciousness of peace and memorial to war victims.
The shape of the regular seven-sided pyramid represents the seven seas and hands joined in prayers. 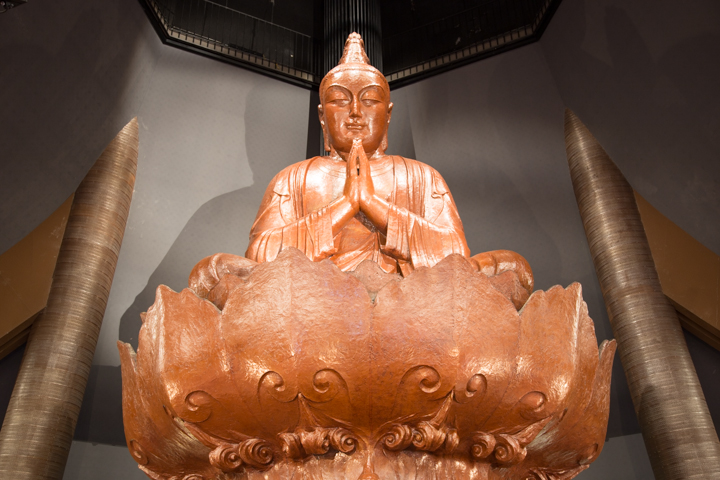 Enshrined in the Okinawa Peace Hall was “Peace Prayer Statue,” whose prototype was constructed by a celebrated artist of Okinawa, Shinzan Yamada, spending 18 years.   Totally it took 22 years to complete the statue.
Kept inside of the statue is a list of names of war victims that are inscribed on the Cornerstone of Peace. 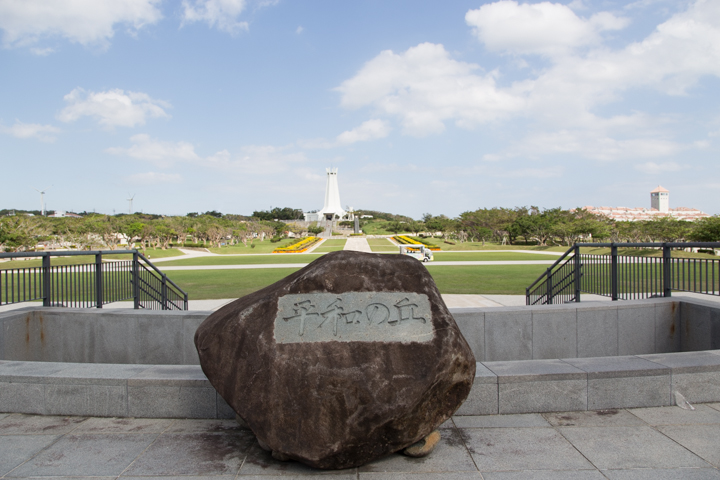 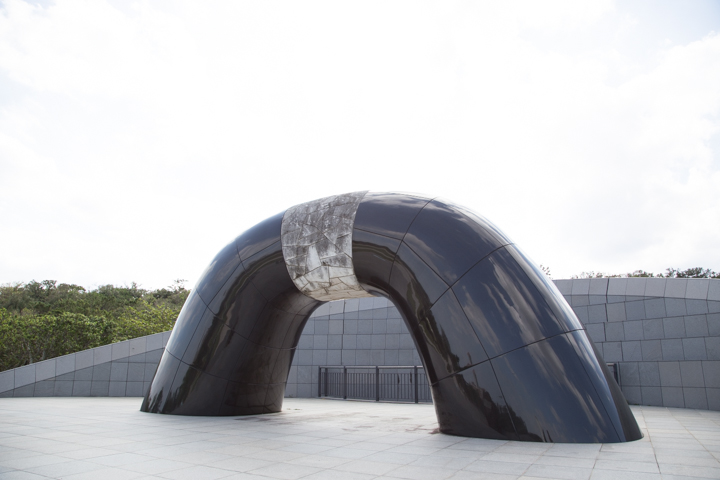 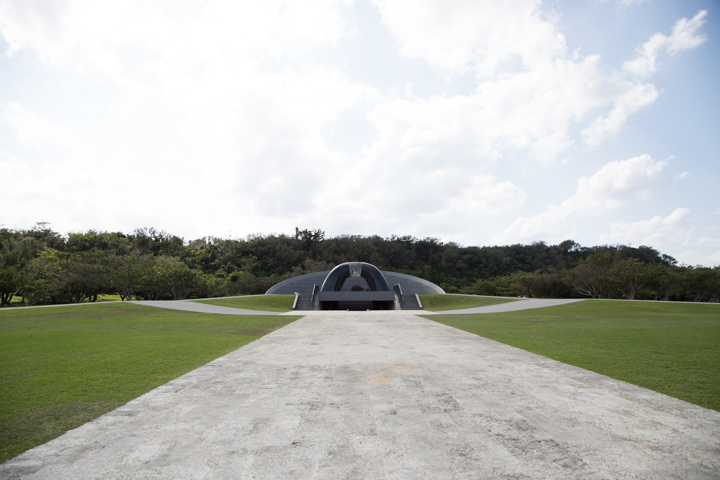 In front of the monument is “Peace Ceremony Zone, where the Okinawa Memorial Service for all the war dead is held on June 23, “Memorial Day” every year.
“Memorial Day” is an important day in Okinawa to commemorate all who died in the Battle of Okinawa and wish for world peace because organized fighting by the Japanese military in the battle is said to have ended on June 23, 1945, 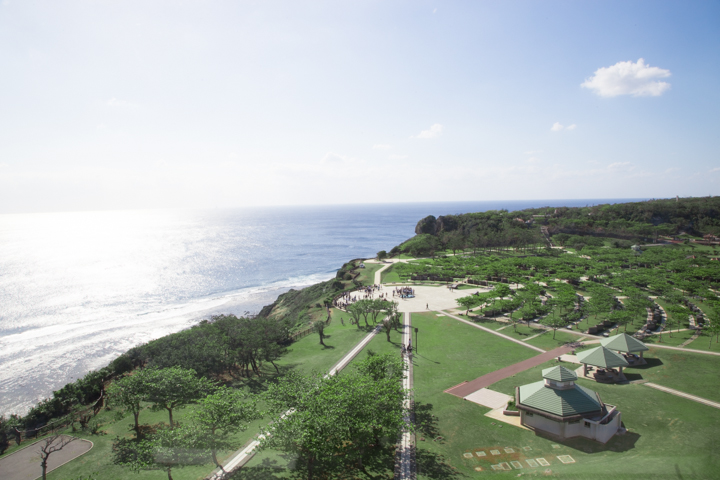 For about 3 months, Okinawa experienced a fierce sea-land-air battle.
The whole area of Peace Memorial Park has full of wish that we will never repeat the tragedy that claimed more than 200,000 precious lives and destroyed numerous cultural assets.   Okinawan people’s wish for peace is deeply rooted here.