Series /Blessing and Taste of the Island No. 18 Jimami Tofu 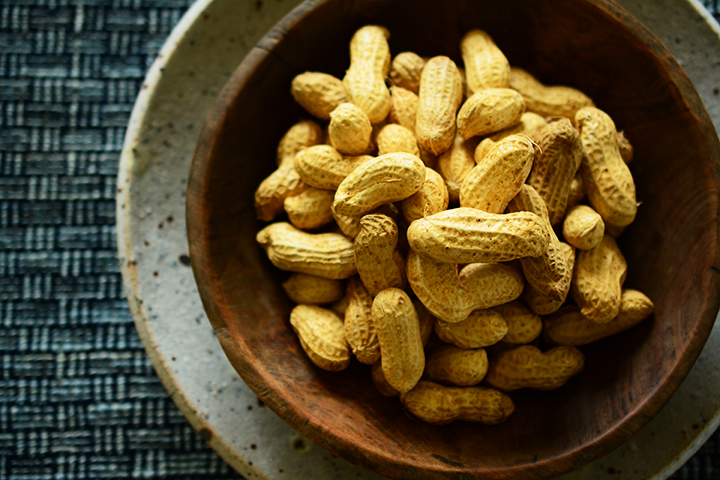 Speaking of Peanuts, it is not so special food in Okinawa
and you might not be able to connect Peanuts and Okinawa.
However, when people hear of Jimami Tofu, many of them would
understand it is a specialty of Okinawa.

Peanuts are called Rakkasei in Japanese which means that flowers drop
and fruits will grow, and it is called Jimami in Okinawa dialect which was originally
called Jimame (beans on the ground).
The locally grown Jimami with or without shell are seen on the market
usually from the end of summer to the end of October.

Only 11% of Jimami is grown domestically against the nation's consumption,
and the crop rate is not particularly high in Okinawa.

There seems to be a historical background.
Jimami had been grown from ancient time in Okinawa
and it is said that Jimami Tofu was originally made in Yaeyama
Islands almost 120 years ago.
There was a time when Yaeyama Islands had better food exchange
with Japan mainland than Okinawa mainland, and people in Yaeyama
Islands were introduced 「Sesame Tofu」for vegetarian diet. Later,
they started to make a similar Tofu with locally grown Jimami in stead of sesame. 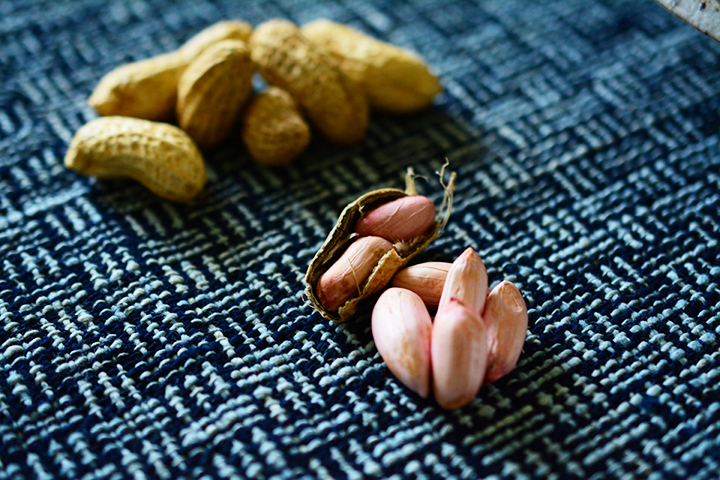 It is nothing special to find Jimami Tofu in  small cups in any supermarket in Okinawa.
But, when I first found it in a supermarket, I remember that I was quite surprised. 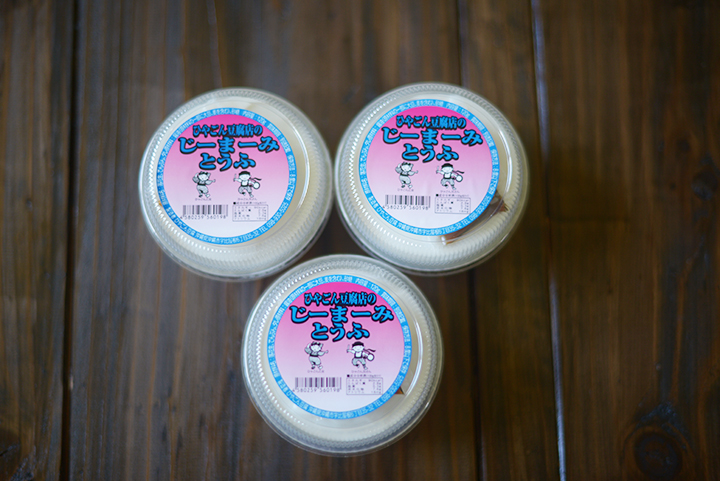 Jimami Tofu is a very familiar food in Okinawa and the locally grown
Jimami is not enough to fill the consumption in Okinawa.
Now is the season for Jimami and when I find local Jimami in the markets,
I feel like being stared by Jimami.

I happened to remember that my friend who settles in Okinawa and is a Web designer,
cooked Jimami Tofu in SNS site before. So, I decided to ask him how to cook it.

The hardest work in cooking Jimami Tofu was to remove the shells of peanuts.
On a rainy day, I was removing the shells alone and I asked my kids,

「Would you like to try and remove the shells? It is so interesting! 」

Unfortunately, my kinds were not so interested in, so I decided to do it all alone
and enjoyed the accomplishment when I finished removing them all.

Removing the skins of peanuts was also a hard work,
but this was all the preparation required for the day. 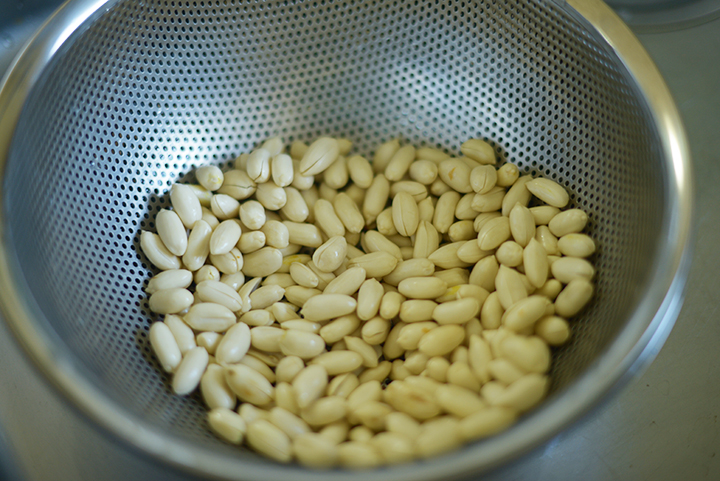 Jimami needs to be dipped in water overnight.
Put Jimami in blender and blend well to smooth.
(When not blended well, please add water and flatten the mixture by spatula
and blend again) 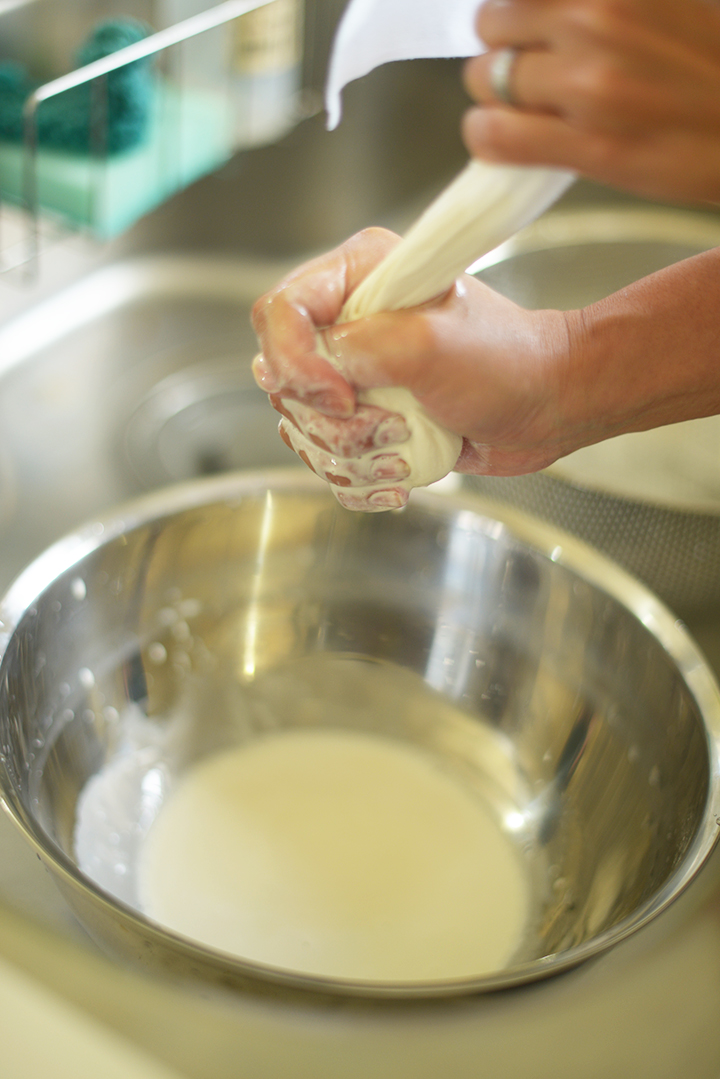 Take out Jimami paste and strain by cotton cloth to get milk.
You need some strength in this process, but try hard to get a full flavor of Jimami. 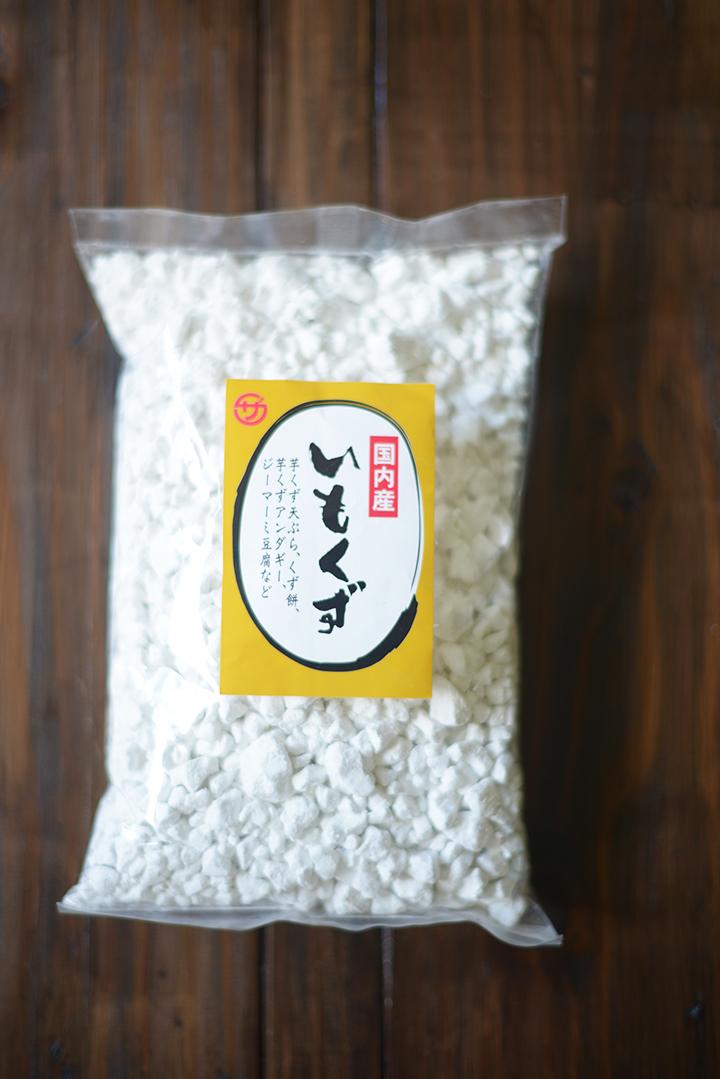 Potato starch is used in many Okinawa cooking such as sweets and Tempura, etc.
The starch is one of the ingredients I would like to study for other possibilities in cooking.

Add 6 cups of water, 1 cup of starch and tapioca powder and Jimami milk in a pan
and heat in low. 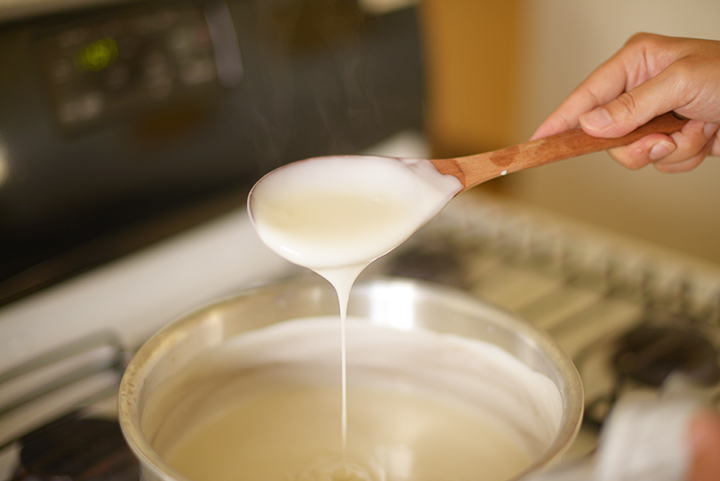 Keep mixing the texture just like drawing a circle on the bottom of a pot
with spoon for 15 minutes until it becomes thick. 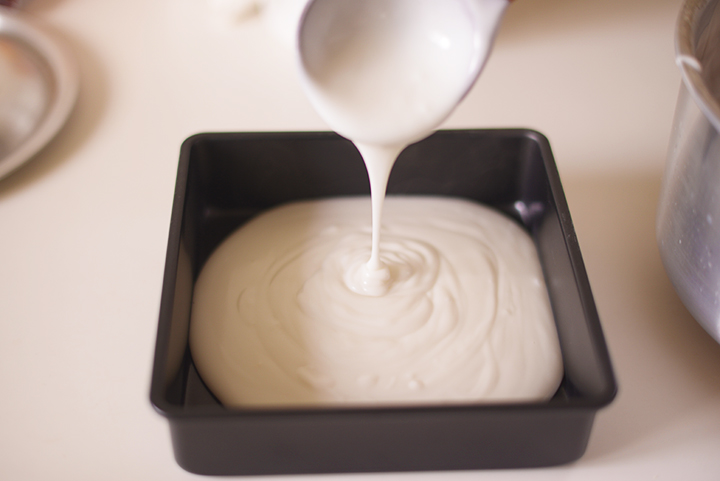 Pour the mixture in square mold and chill it in refrigerator until ready to eat.

In the meantime, prepare for the sauce.
It is very simple. Put bonito broth and soy sauce and Mirin (sugar) and heat to boil.

「Is it ready to eat?  How does it look? 」
I was so excited to take it out from refrigerator and It looked ready! 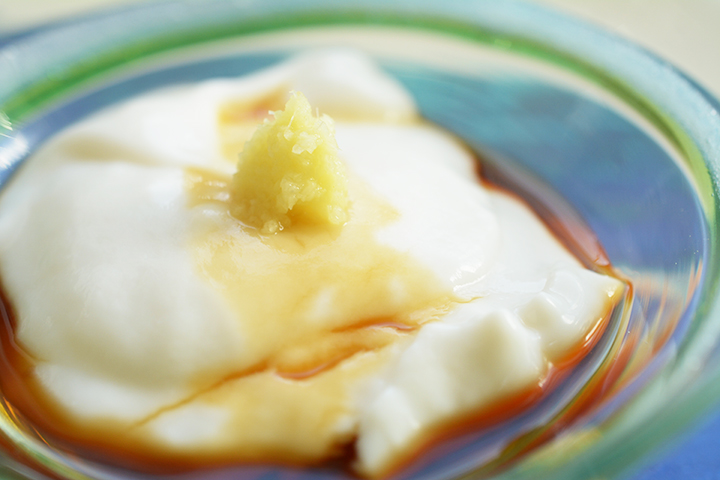 The smooth, tender and lovely Jimami Tofu was finally ready to serve. 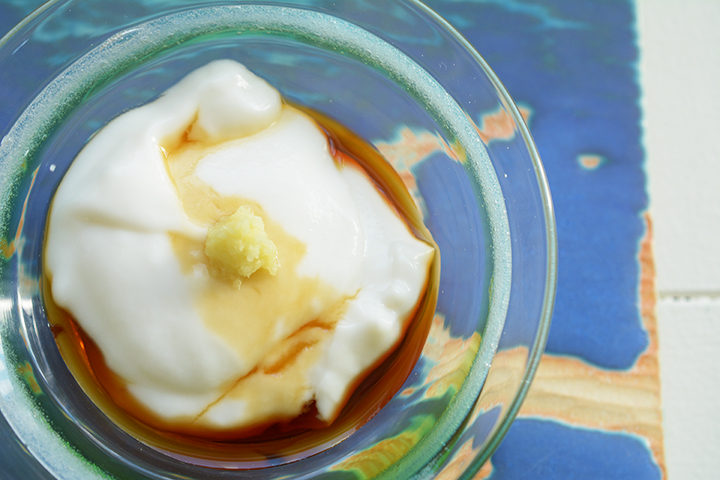 Place Jimami Tofu on a cool feeling dish and dress with the sauce
and grated ginger on top. When you taste in a spoon,
you can enjoy a very rich flavor of Jimami in your mouth and it is so smooth
and tender that you can easily swallow it.

Jimami Tofu are sold in any supermarket in Okinawa. However,
when I actually cooked it, I realized that it would take time
and require strength although the way of cooking was simple.
I felt grateful for Jimami Tofu I can easily get,
but the one I made by myself with a lot of time
and efforts was quite different from the one I normally have and so special.

I wish to try again to cook Jimami Tofu in the next season as well.

Mr. Takeyama, who taught me how to make Jimami Tofu,
also learned from a shop lady when he was buying it and tried to make it by himself.

Even through a shopping in a small town, you can learn
and enjoy culture and atmosphere of Okinawa.

How to make
Remove the shells and skins of peanuts.
Blend in blender to soft and smooth
Strain through a cotton cloth and take out milk,
Add the milk, potato starch and water in a pan and heat in low.
Keep stirring until it becomes thick and heavy and remove from heat.
Pour 5 in a mold and chill at least 3 hours in refrigerator.
Put ingredients for sauce in a pan and heat to boil.
Place cold Jimami Tofu on a dish and dress with sauce and grated ginger to serve. 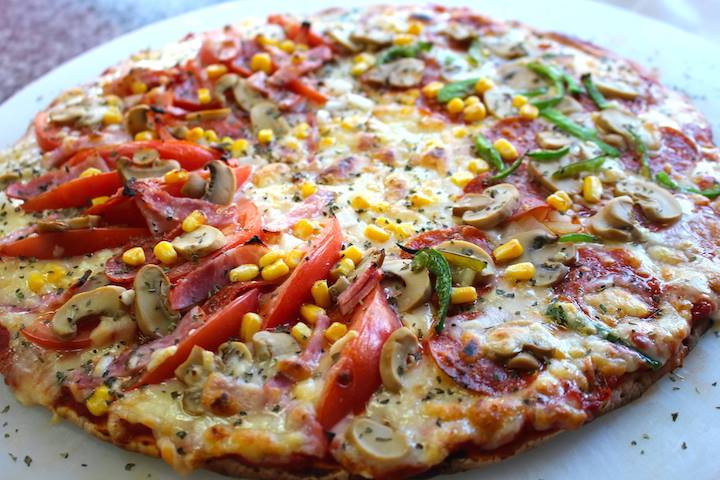 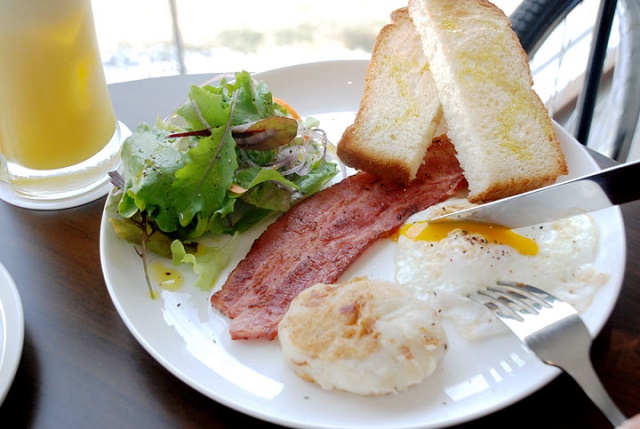 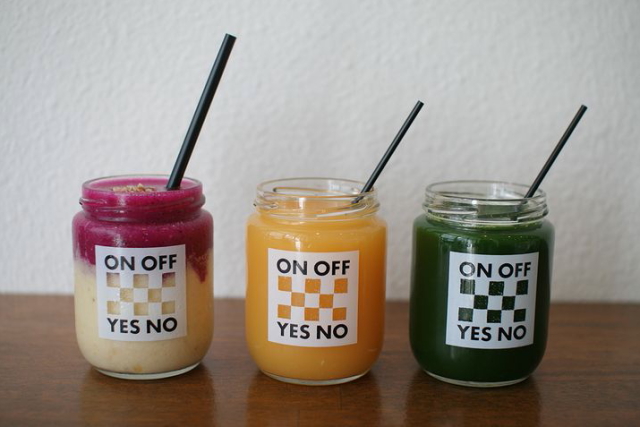 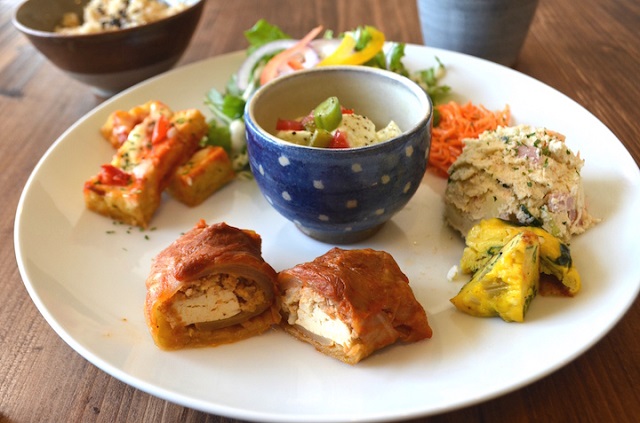 Shimadofu is changed into too delicious food! You have never seen this soybean cafe before. Let’s go to Soy Labo! 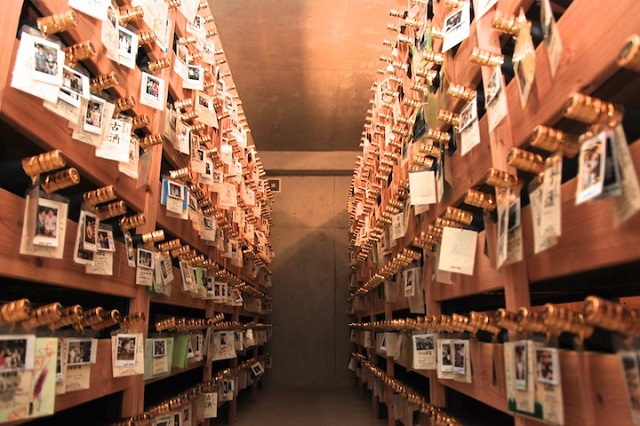 Kamimura Shuzo Where You Can Meet Only One Special Bottle