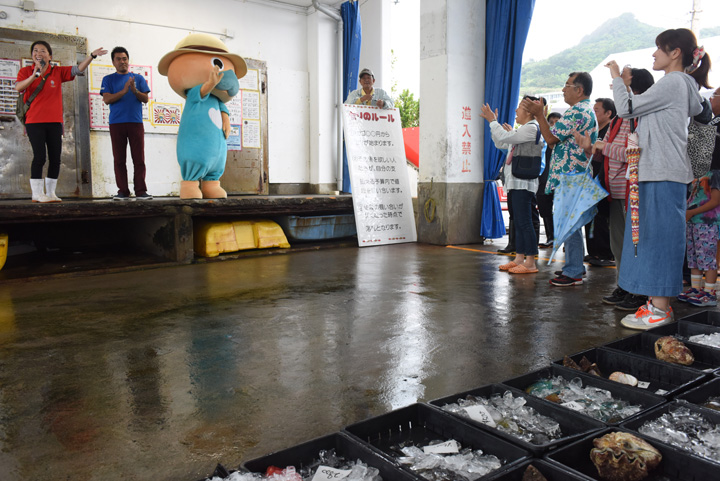 “Uminchu Tore Tore Morning Market” is held at a fish market in Nanjo City in the southern part of Okinawa from 9AM, every third Sunday.  Not only the local people but also tourists can join the auction to bit on freshly-caught fish!

The last “Uminchu Tore Tore Morning Market” was held on the third Sunday of April, which happened to be “Day of Mozuku (or Cladosiphon okamuranus, an Okinawan seaweed).”  So visitors could enjoy experiencing mozuku dishes and “Fishermen’s Cooking” such as cleaning a fish! 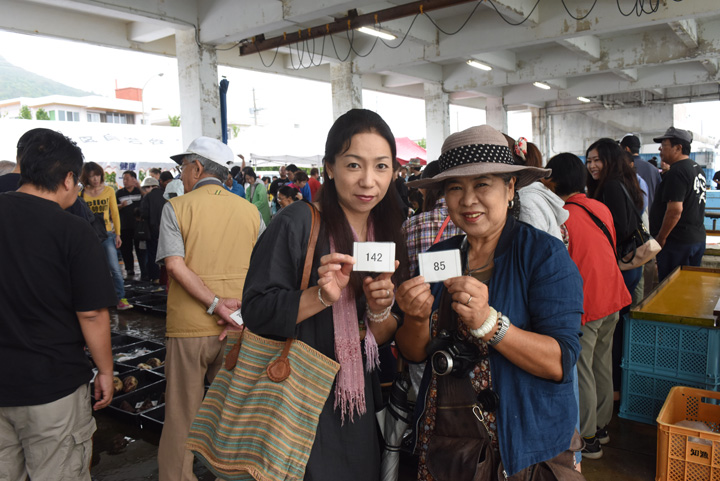 In order to participate the auction, you have to get a numbered ticket.  Ms. Nagahama from Nanjo City (shown on the right of the above picture), who was excited and got to the head of a line, but was disappointed to receive a number 85.  But please don’t worry.  The numbers is like ID number for participating in an auction.  No matter what number you get, it won’t make any difference! 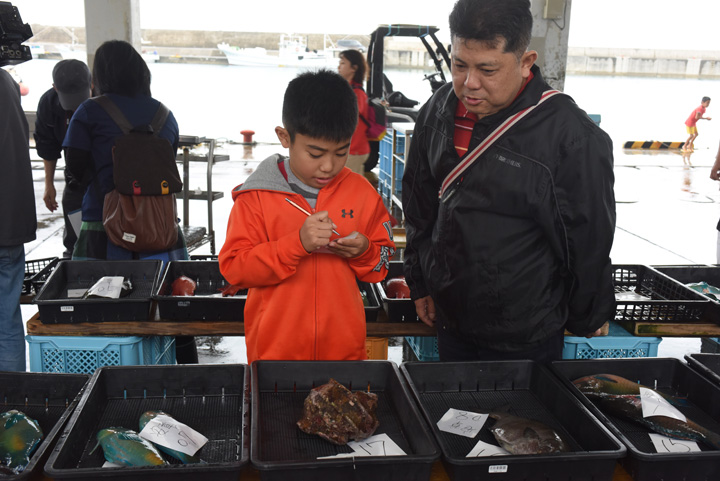 Before the auction starts, you will have to check which fish you would like to get.  The auction starts with the voice saying “○○ yen a basket!,” so please don’t miss the starting price. 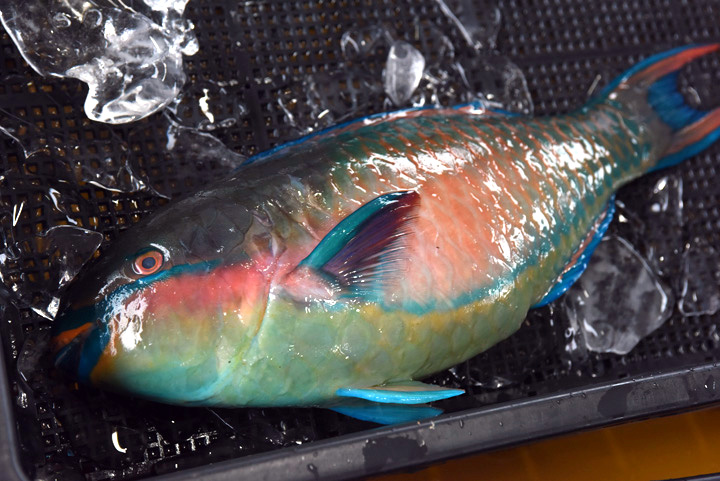 The fish market is full of fruits of the sea caught freshly on the day including fish caught in a nearby sea in Okinawa like colorful irabucha (knobsnout parrotfish), popular fish like bonito, tuna, etc. as well as squid, shells like giant clam, etc.! 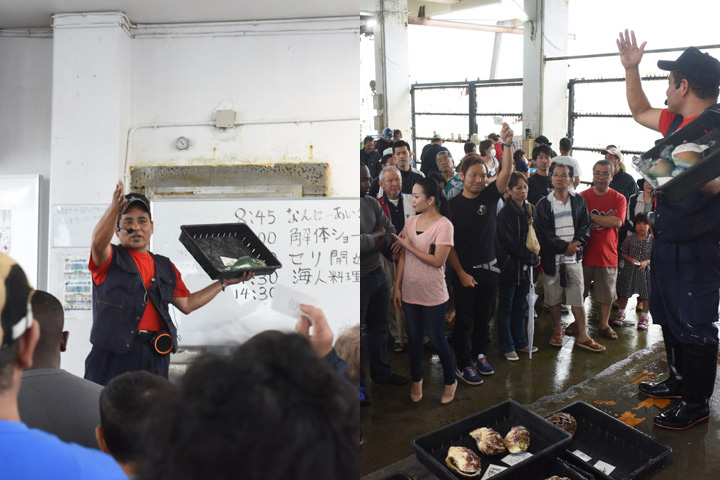 When the auction starts, you will compete with others who would like to get the same fish as you by giving a higher price within your budget.  When you have no competitors who give a higher price than yours, you win a bid. 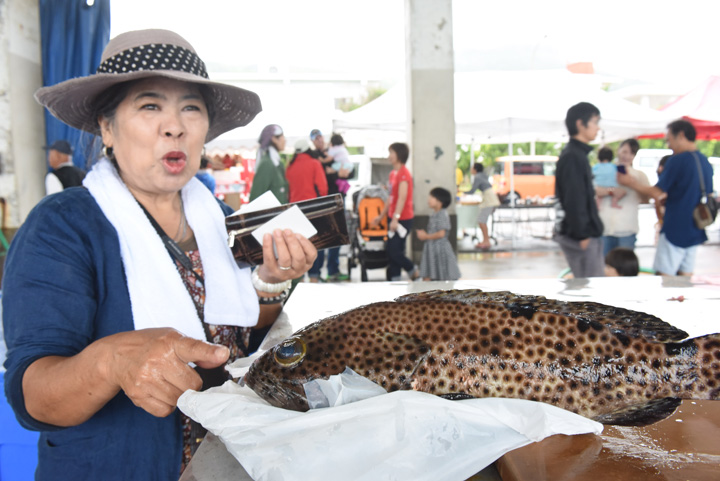 As Nagahama-san also wanted a 1.3kg miibai (grouper) and won the bid, she was happily satisfied.  Of course she smiled because she was able to buy it half the price of the market! 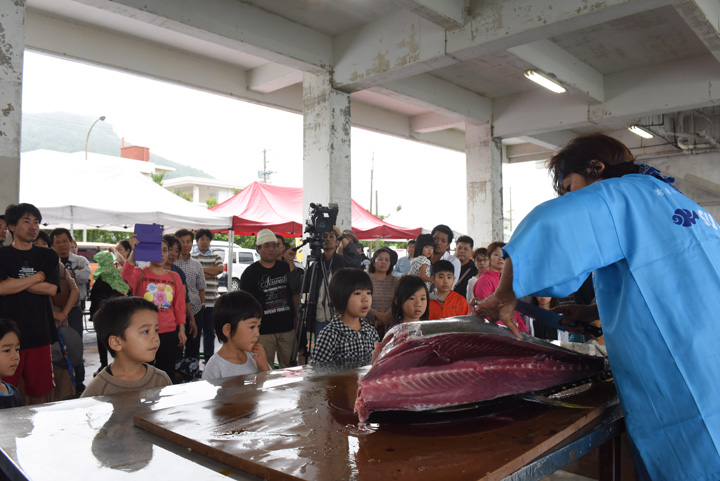 Additionally, if a big tuna is caught on the day, you can enjoy watching a tuna cutting show!  Everyone was glue to a nifty work of kitchen knife. 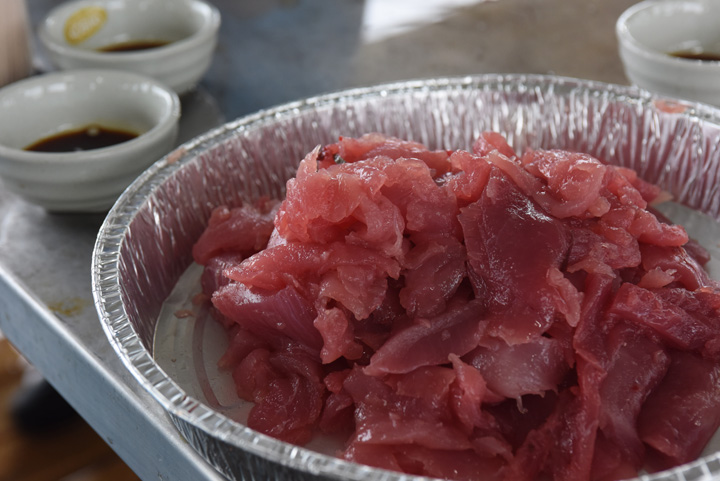 After cutting into fillets, fishermen will provide you tuna nakaochi* for tasting!  You can buy tuna meat by the block.  It would be excellent if you cook it as sashimi or steak!

* medium fatty tuna meat which is specifically scraped off from bones, and finely chopped 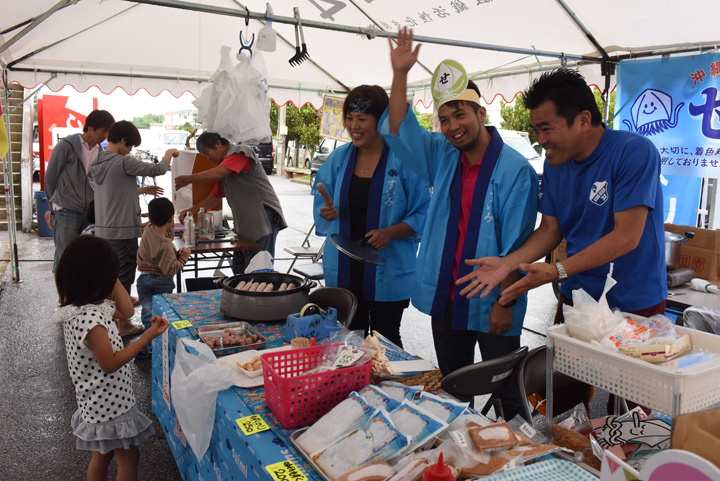 There are several vendors selling specialty products of Nanjo City around the auction venue, so you can buy locally-grown vegetables and their processed foods other than fish. 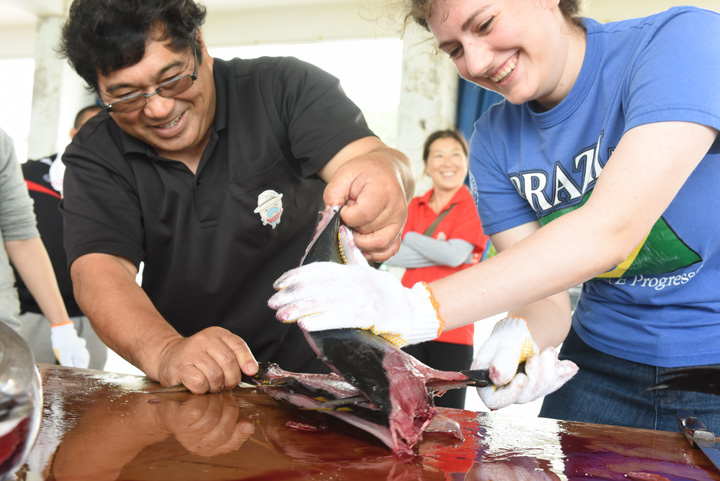 After the morning market, “Fishermen’s Cooking Experience” was held on that day.  As participants can learn how to clean the fish and how to cook it, someone from far even from Uruma City in the central part of mainland Okinawa joined the experience. 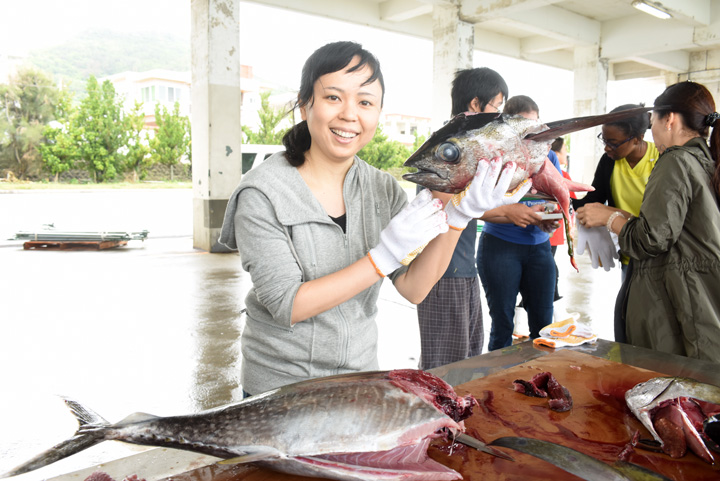 When I asked one of the participants how she liked it, she said, “I seldom cleans fish, so it was quite a good experience!  I will try to do it at home, too.”  Yes!  From now on, she can do it alright even if she buys a whole body of fish. 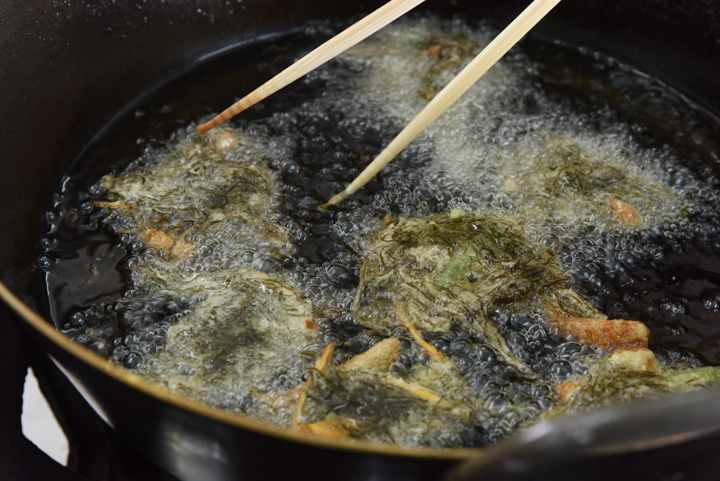 And it was “Day of Mozuku” (The third Sunday of April), a cooking lesson was held to cook mozuku, which is in season, for tempura or vinegared dish.  It was easy to cook, and we learned the knack, so we can cook by ourselves next time. 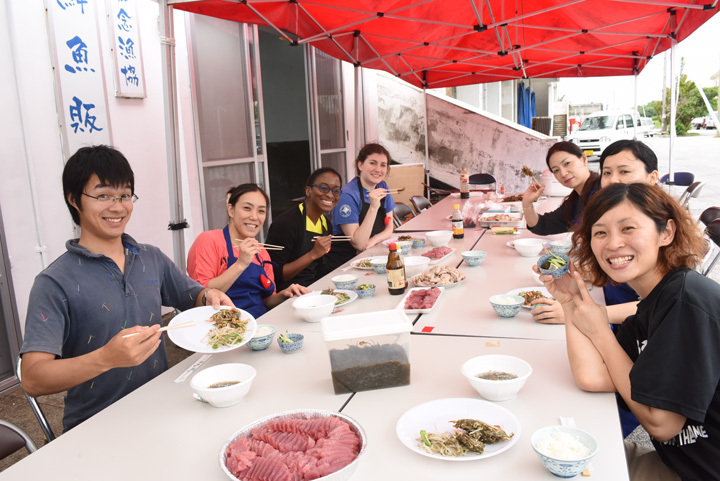 When the meals were prepared, we all sat at the table and said “Itadakimasu!”*  It was lovely to savor freshly-prepared fish meals using freshly-caught fish with everybody outside joyfully.  We could enjoy the taste many times more than usual! 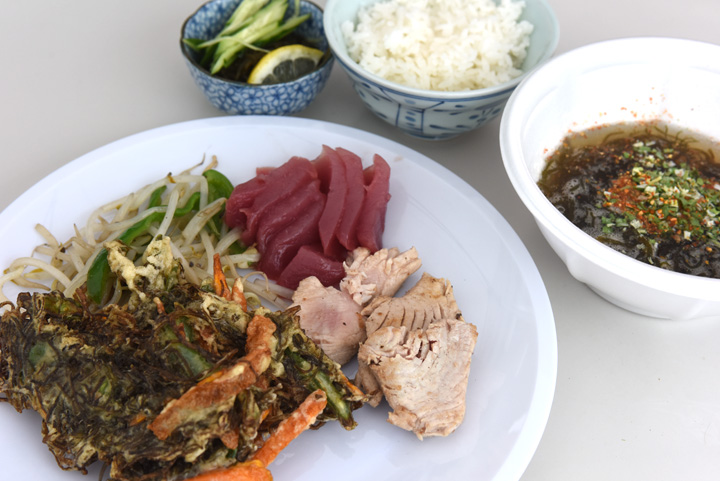 Itadakimasu* It literally means, "I humbly receive."  It is said to express gratitude for all who played a role in preparing, cultivating, ranching or hunting the food.

Why don’t you join “Uminchu Tore Tore Morning Market,” which is held on every third Sunday from 9AM?

Also please check the official website of Nanjo City Tourism Association for information on other tourism events, which is updated as needed! 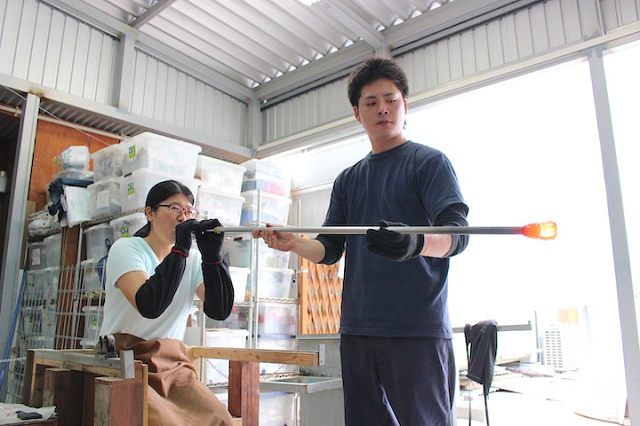 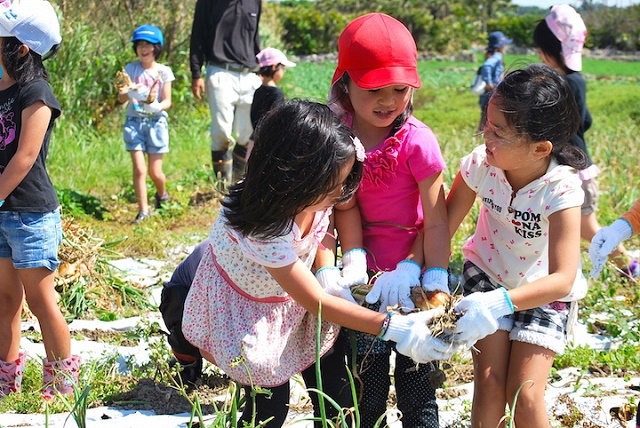 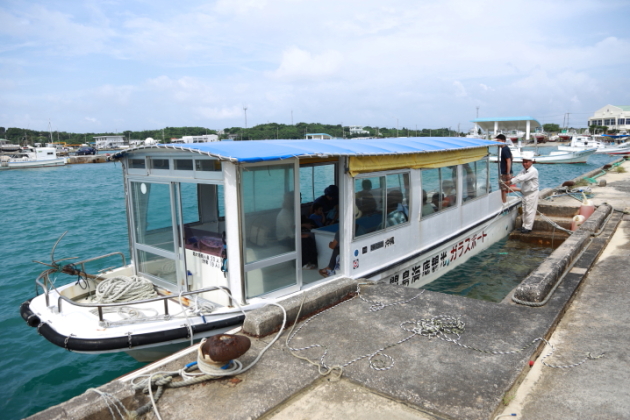 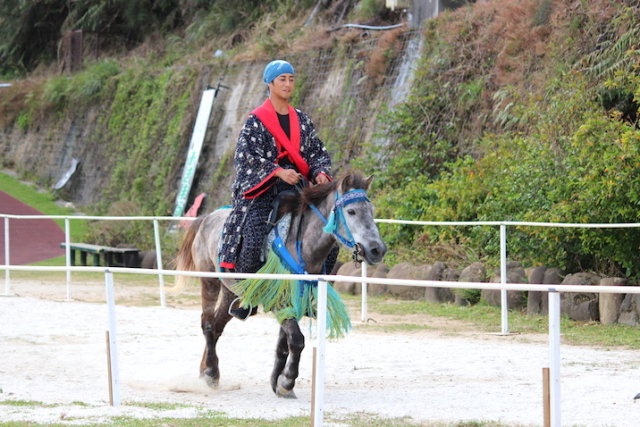 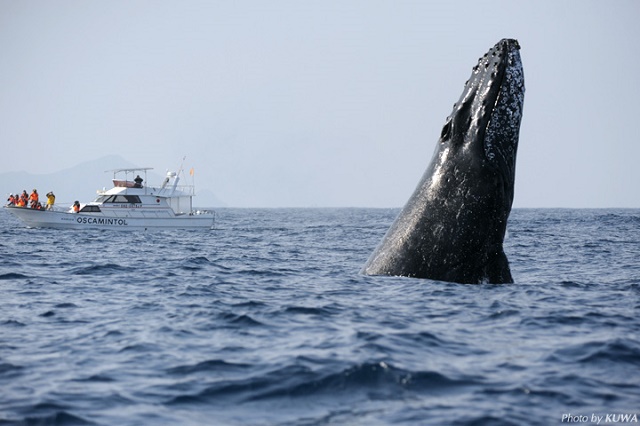