We have been waiting for a bakery like this! “Moja’s Bakery” in Miyako Island, which is friendly to your body and mind. 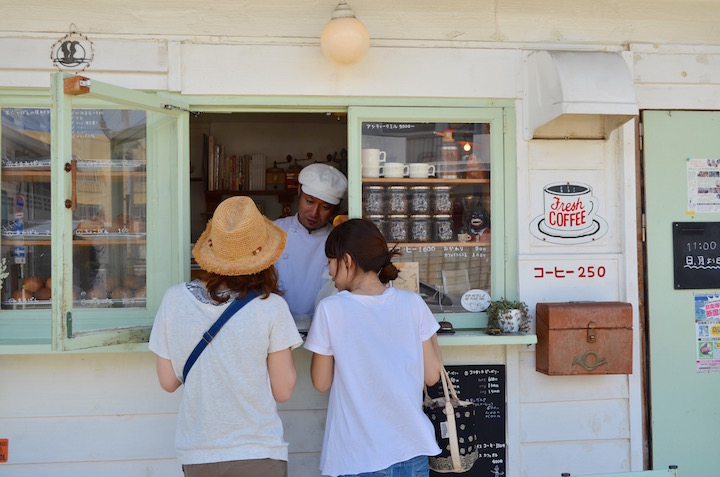 At 11 AM, a small glass window is open and Mr. Tomohiro Murokami, the owner of the bakery shows his face.  From the tiny shop of 3m wide and 2m deep, the savory smell of freshly-baked bread comes out. 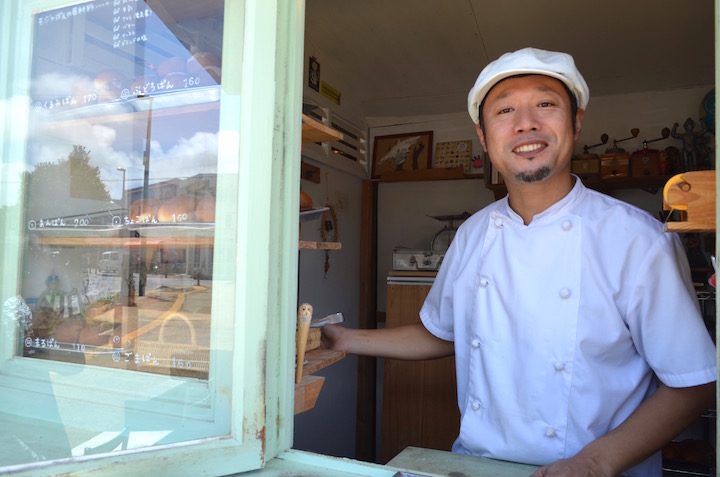 On a very ordinary alley, customers come out from nowhere.  Moja’s Bakery, which just celebrated the 2nd anniversary of its birthday recently, is always crowded at the opening time with customers including adults, children, elderly people, and even dogs. 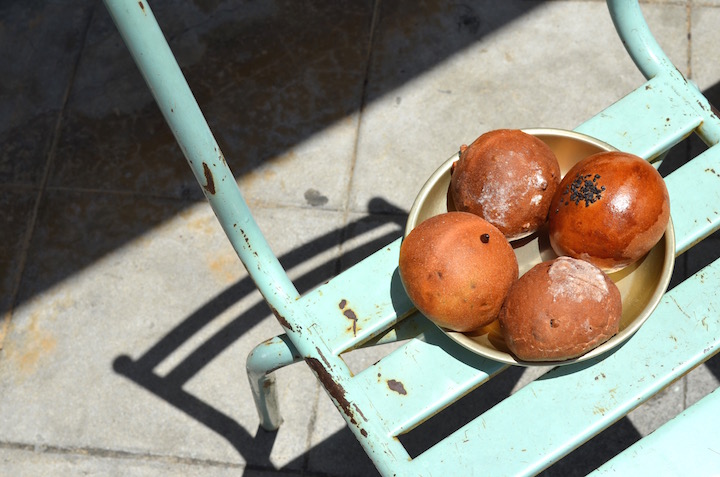 Moja’s bread is like something that he makes koppepan (hot dog bun) into a round shape and tastes something familiar.   The surface is chewy while the inside is moist.  It has a simple, gentle flavor and gives you a little sweetness.  He uses wheat flour from Hokkaido, sugar from Tanegashima, salt of Guérande in France, milk, butter, and rising.

Mr. Tomohiro Murokami, the owner of the bakery carefully selected the ingredients.  He wanted his customers to feel safe to eat delicious bread, as well as wanted to manage to make bread all by himself.  That’s how he decided on these ingredients. 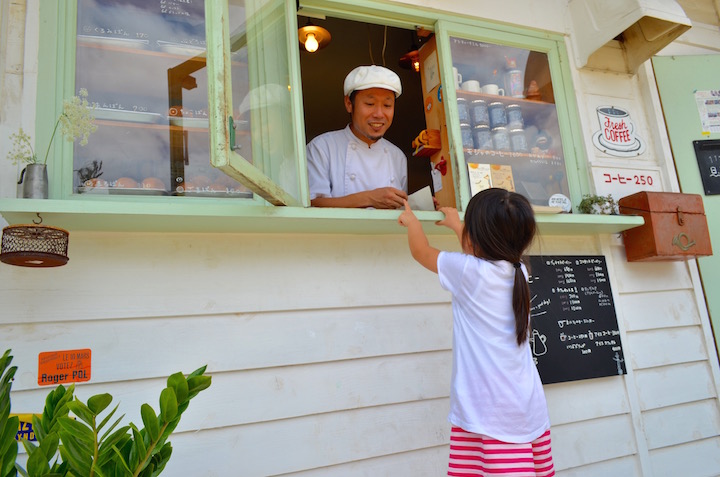 Bread which he baked before the opening time is sold out in an hour, so he starts filtering wheat flour and kneading it as he sell the bread. 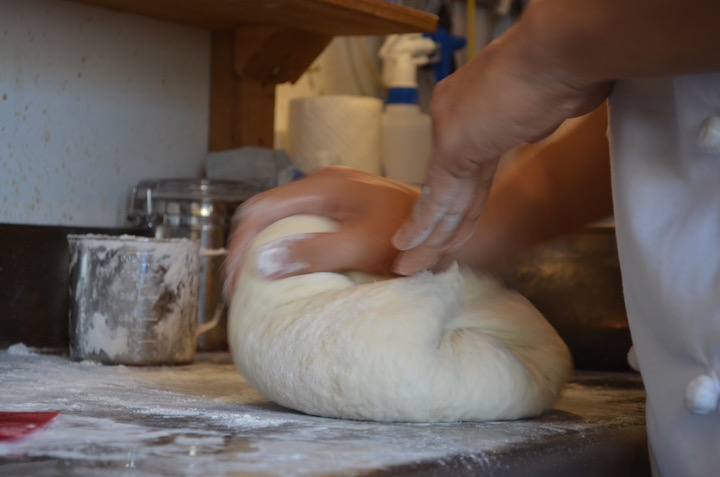 “Fresh wheat flour feels comfortable.”
While watching how he makes bread as I talked with him, customers came one after another. 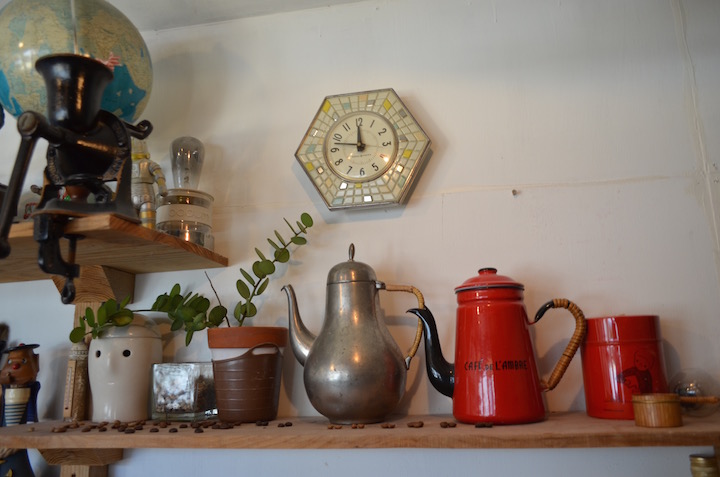 “You know a rumble pot, right?  When you pour coffee into a cup, you can pour very thin coffee.  This is an original pot from “Café de Rumble,” and this is my proud cast metal pot from France.”  Just like a boy who is proud of a worthy card that is incredibly hard to obtain, he showed me his “proud” excellent items with shining eyes.

“I would like three chocopan, three anpan, two “chestnut” and two “raison”.”  A young lady with her baby in her arm came.

“The baby cannot hold up her head yet, can she?”
As he was putting the bread into a bag, he continued the conversation.

“She is already three months old.”
“Is she?  She is in good shape for her age.”

While kneading, letting it stand, baking and selling, he continues the conversation with customers and gives the round-shaped buns. 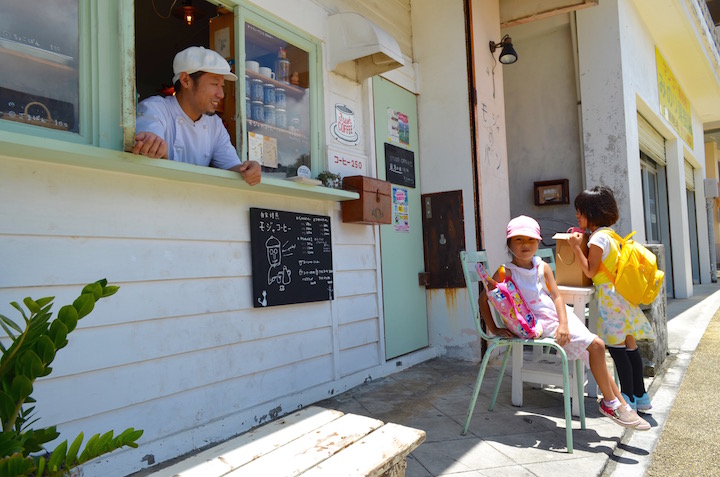 “This year more pregnant ladies and mothers with little children come to my shop.”  As the opening hours are from 11:00 to 15:00, customers who can come are housewives, elderly people, field salespeople and elementary school students in the neighborhood.  There must be a reason why Moja’s Bread is popular especially among young mothers other than because they feel safe to enjoy a gentle flavor of his bread. 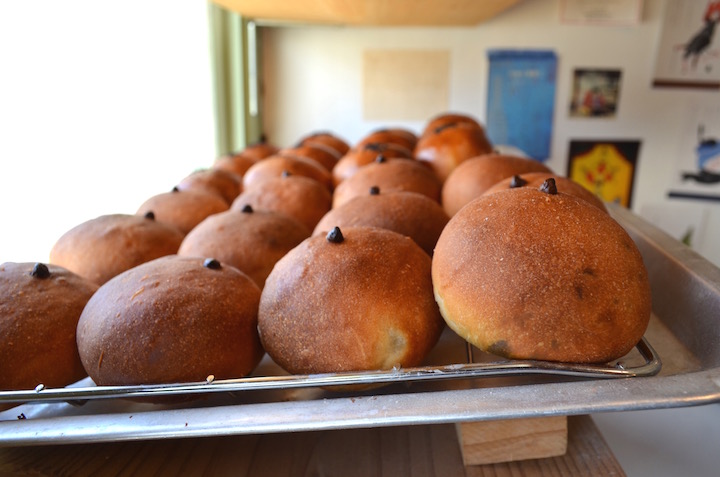 “When looking at just-baked bread, sometimes I think it is cute.  But wheat flour has “a bad mood” from time to time.  When I am into a conversation with customers and neglect it when I am in the middle of kneading it, it “pouts”.”

He does not show a half-hearted attitude toward people as well as bread, which is why customers would come to this bakery on a small island endlessly. 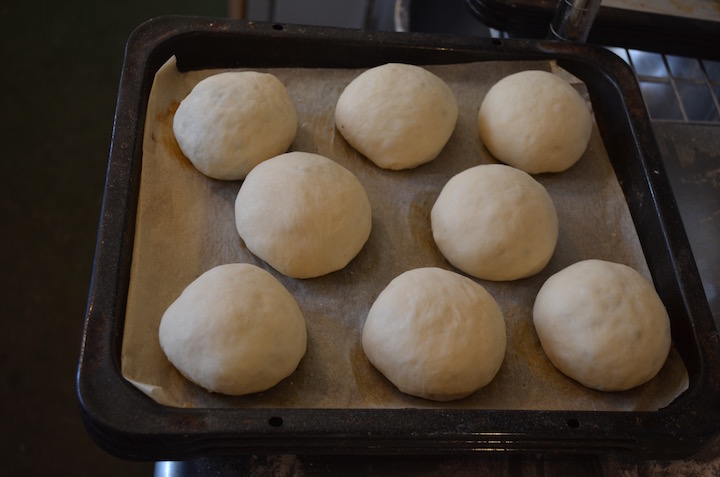 “Please touch this one.”
When I touched the bread dough, it was elastic like a baby’s thigh.  I felt as if it were filled with lots of life.
“When bread is well fermented, it feels like this.”
Hmm...I see.  A professional baker can see what “the mood” of the bread is by touching. 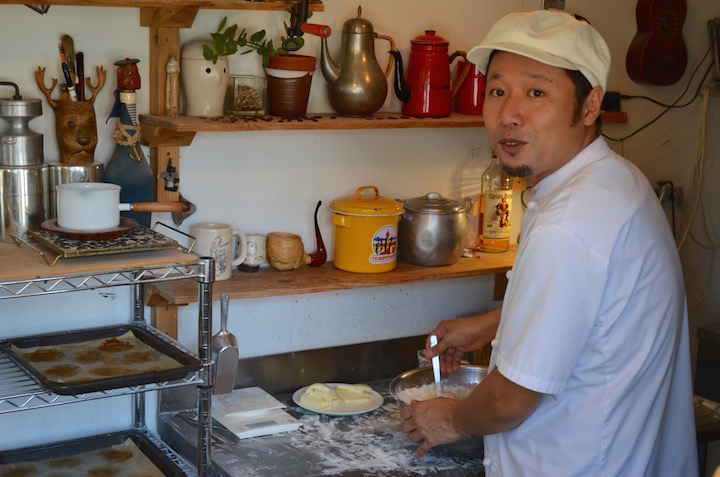 If he makes all the bread before the opening time, he can have more relaxed time and sell more bread during the opening hours.  There is a reason why he does not do so. “I don’t like to sell cold bread and freshly-baked one together.  I would like customers to eat freshly-baked ones, so cold ones are always left,” he said.   I can understand that.

Because of such a character of him, not a few times he receives love letters from customers.  For example, a foreign lady living in Tokyo wrote to him, “Your bread is the best one that I have ever tasted since I came to Japan, and a little crazy.”  He was happy to read it. 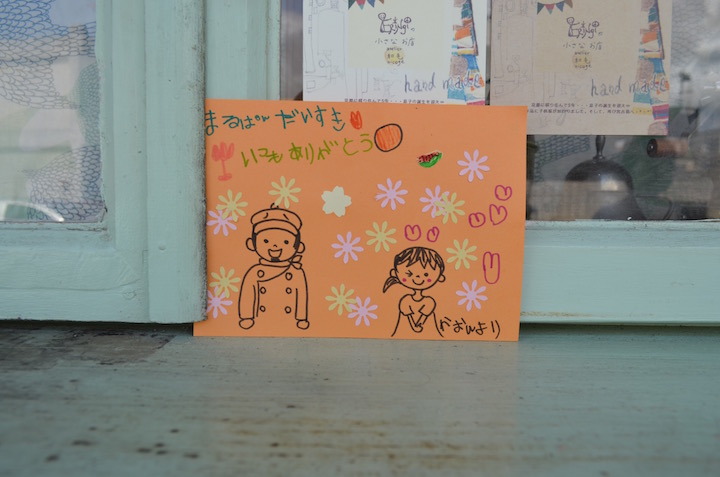 The following day after the interview, I visited Moja san to buy some bread.  He welcomed me with a face like an elementary school student who just told a girl that he liked her.  I asked him what had happened to him.  “Look at this.  A girl who came to my shop yesterday gave me a love letter,” he said as he showed me a small letter with illustration secretly. 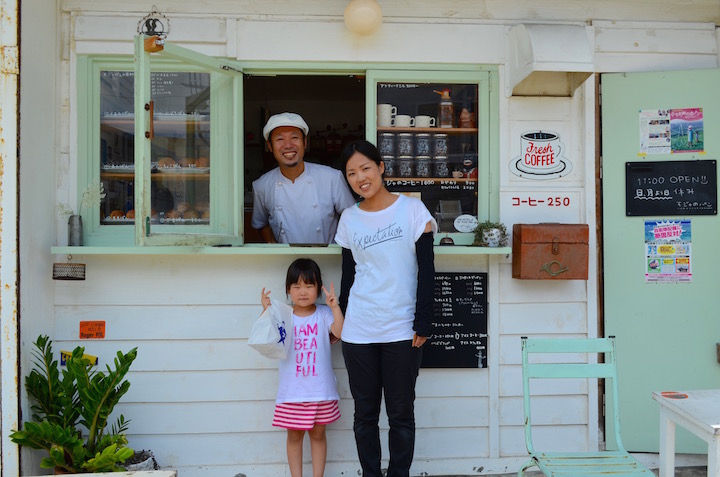 The appearance and the flavor are very simple, but his bread are made with lots of care.  There is something like the atmosphere of Miyako about Moja’s bread.  When you come to Miyako Island, please try his bread! 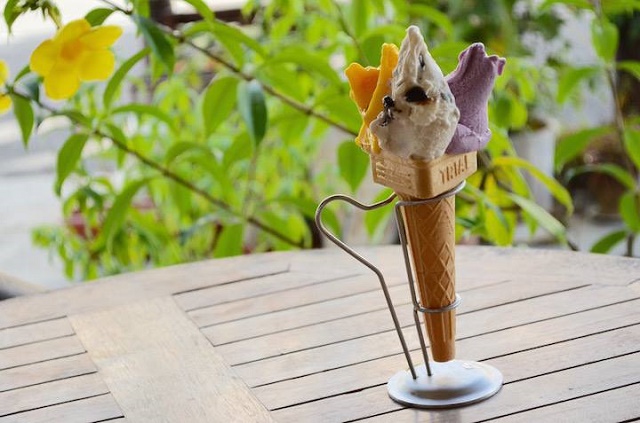 Strongly-recommended RICCO Gelato with Okinawan flavor, the technique of making which is from Italy and developed in Miyako! 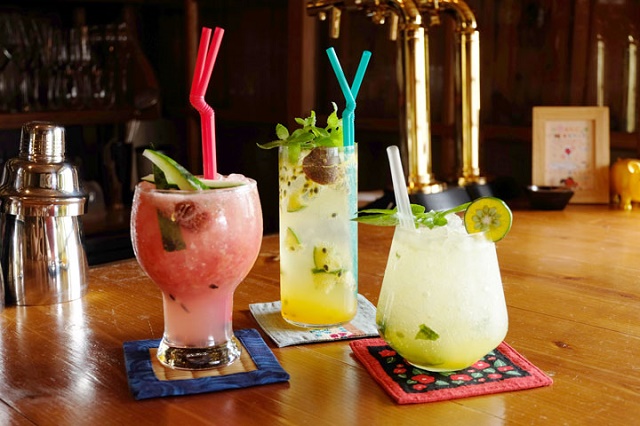 “Please give me a cocktail to be more in the mood of Okinawa.” You can savor custom-made cocktail at the old traditional house. 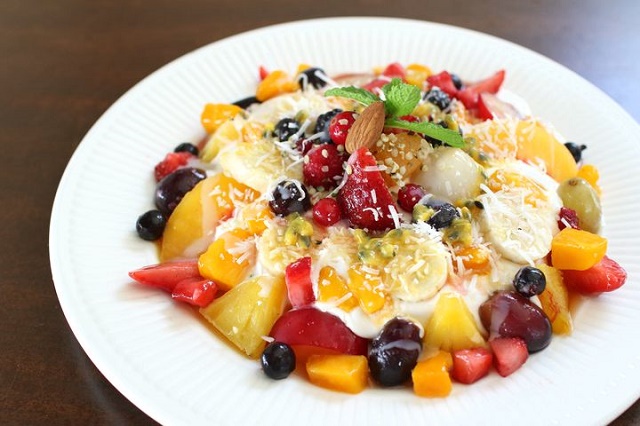 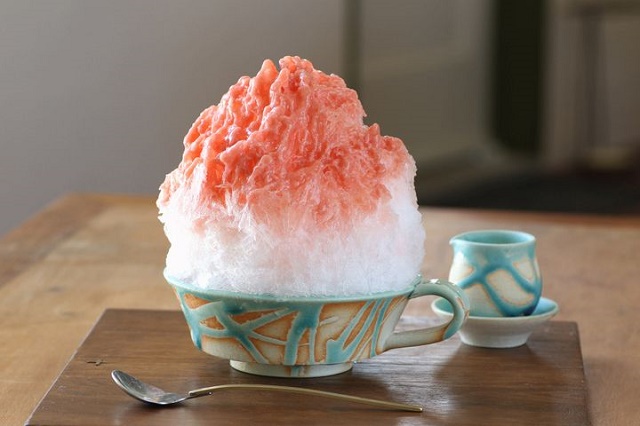 Fluffy like snow! Shaved ice on Yachimun melts in your mouth. “Ruan + Shimairo” 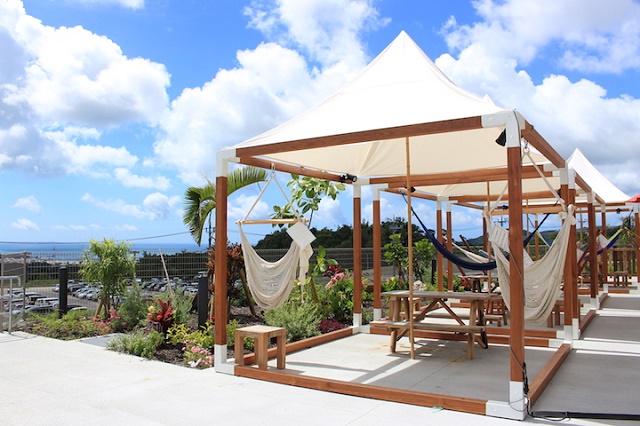 EARTH HAMMOCK CAFE, where you can fully enjoy the sky and the sea of Okinawa