This year again, a feature of winter in Okinawa and the biggest sport event in Okinawa, “The 31st NAHA Marathon” was held extravagantly on Sunday, December 6!

The course for one of the major citizen marathon races in Japan, which is commonly called “Festival of Sun, Ocean and Joggers” covers five local municipalities in the southwestern part of mainland Okinawa including Naha City, Tomigusuku City, Itoman City, Haebaru Town and Yaese Town.  The 31st annual Naha Marathon race attracted 26,679 entries, and 18,326 runners finished the goal line admirably!  The winner in men’s category was Mr. Tomohiko Takenaka, a debutant from Kyoto, who completed the course in 2 hours 23 minutes 05 seconds.  Ms. Mitsuko Hirose from Tokyo made the first record of the 4-time consecutive winning with the time of 2 hours 53 minutes and 34 seconds. 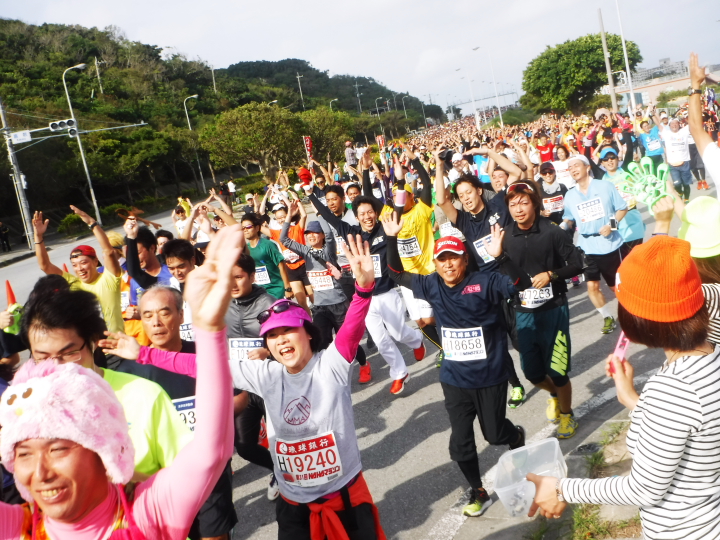 Following the last year’s event, I, a photowriter Kiwamu Ogawa, represented Okinawa CLIP to make a report as well as participate in and complete the race somehow.  I would like to share you with a photo showing me having finished the goal line, feeling worn out and exhausted! 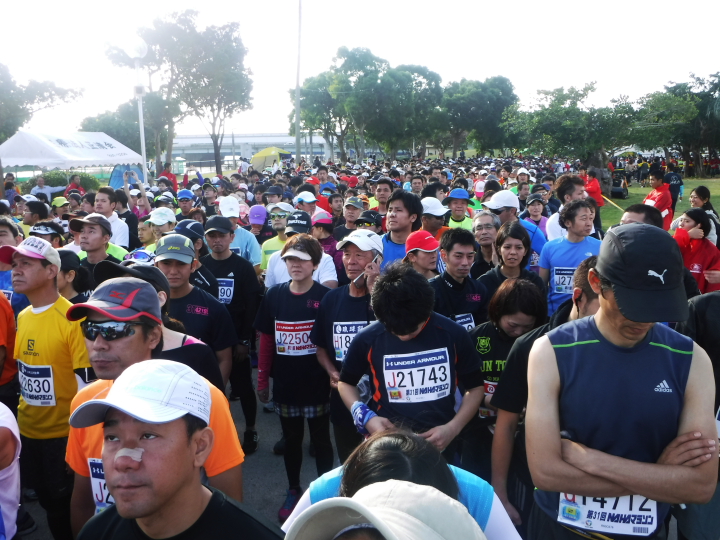 The race started by the sound of “Bankoku Shinryo no Kane (Bell of the Bridge over the Nations)” at 9:00 AM at Meijibashi Crossing on Highway 58!  Everybody is looking forward to seeing a big guest at the starting point every year.  This year a comedy pair “Slim Club” appeared in the race.  Their fall guy talk familiar to everyone brought a laughter to the entire venue, and made a peaceful start of the event. 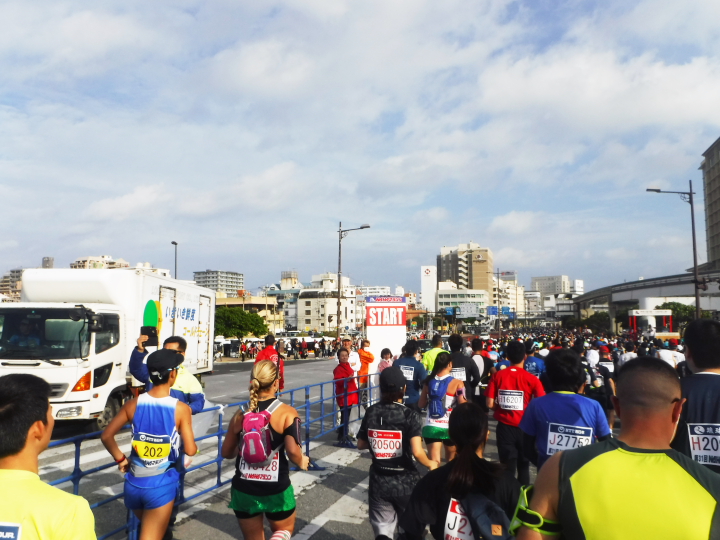 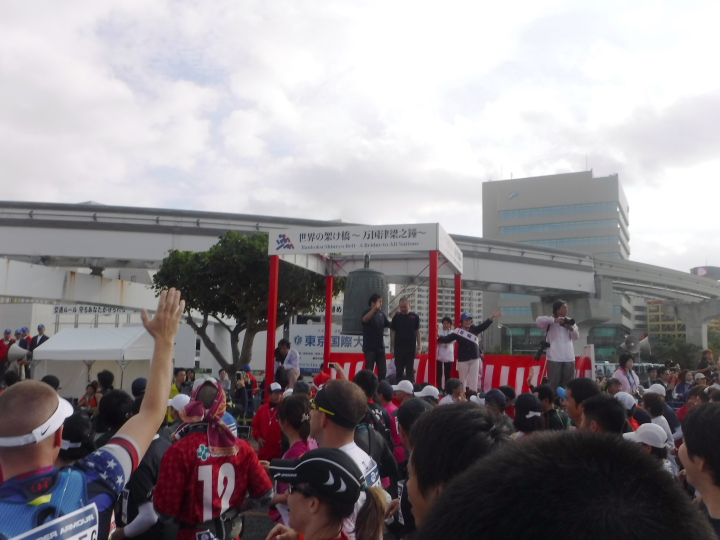 It was sunny in Okinawa on the previous day of the event, but according to the weather forecast for the event day, it was rainy after cloudy with the temperature of 25℃.  Contrary to the last year’s race, a severe race was expected.  On the morning of the event day, it was sprinkling, but at the starting time it was getting sunny a little.  However, immediately the clouds began to gather over the runners.  They experienced overcast skies in the morning as had been expected. 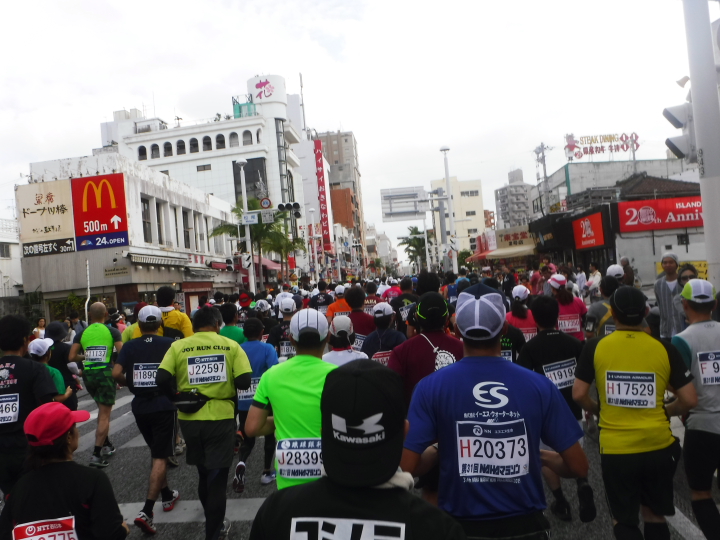 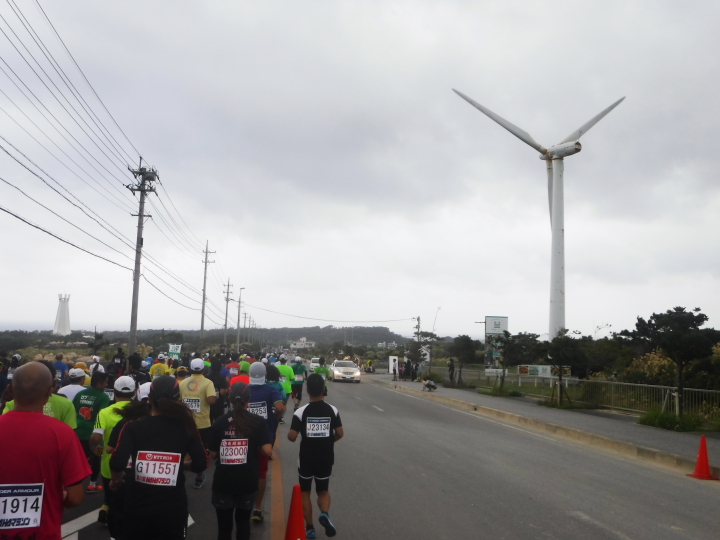 After noon, it started raining at last.  Some runners put on raincoats or rain ponchos which they had with them, but most of the runners kept running soaked in the rain. 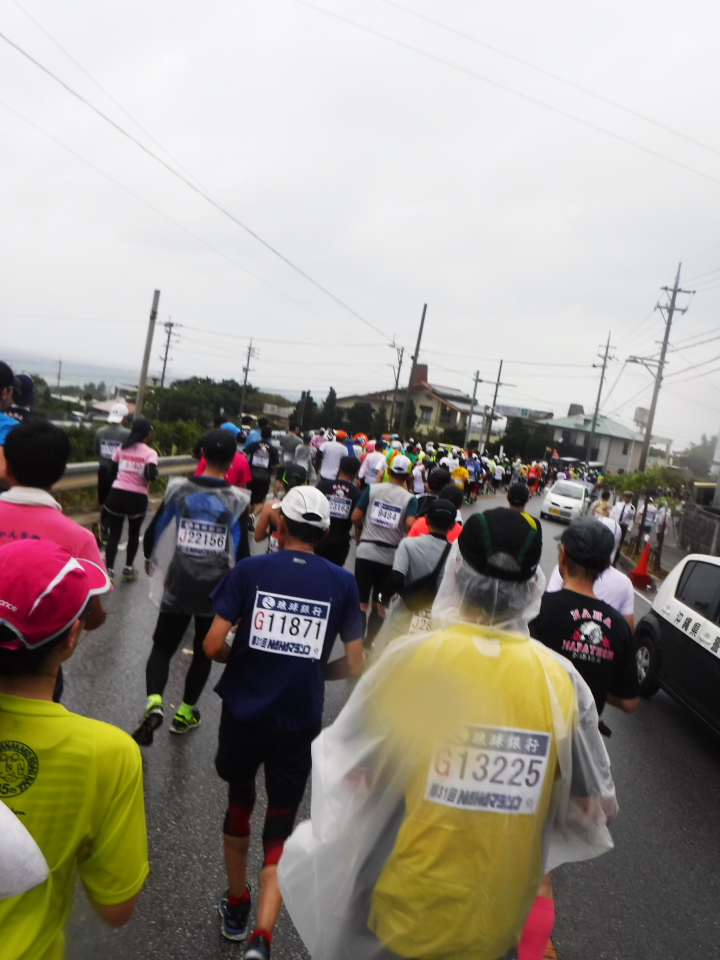 NAHA Marathon is organized by a large number of volunteer staff members for management, a variety style of enthusiastic cheers by the local residents and supporters along the road, “privately-built AID,” etc.  It is not too much to say that their overwhelming presence is truly a hidden main character for the event.  “But this time in this rain, not so many people are…,” I was wondering but….. I was wrong!  Many high-spirited people from young to old were waiting endlessly throughout the course.  Avoiding the rain with umbrellas or raincoats, they gave the runners a push from behind with cheers “Chibariyoo! (You can do it!)”  This gave the runners courage 100 times as big as they had! 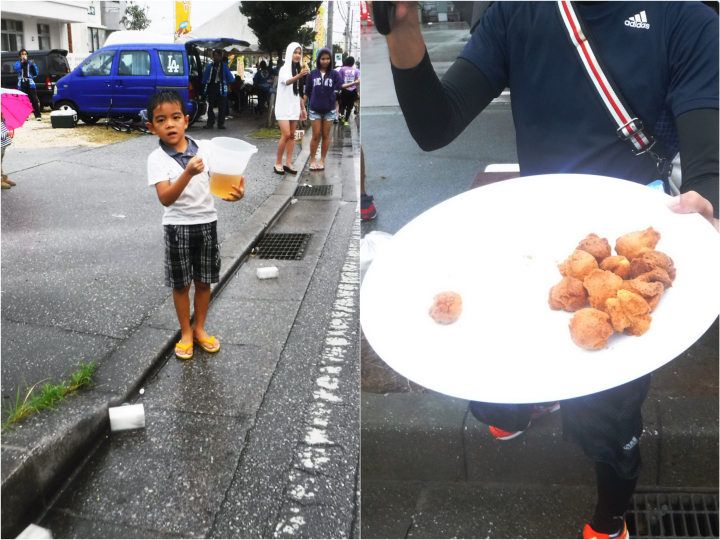 Receiving soulful yells as well as services of food, drink, cold spray, etc. throughout the course just like always, I was able to move steps forward one by one.  Yes, that’s right!  Thanks to their loving cheers, runners never give up and can keep running!  As a runner, using this opportunity, I would like to thank you most sincerely for your great support.  For volunteer staff members who supported in different ways throughout the program and all the people who cheered for the runners, I thank you very, very much! 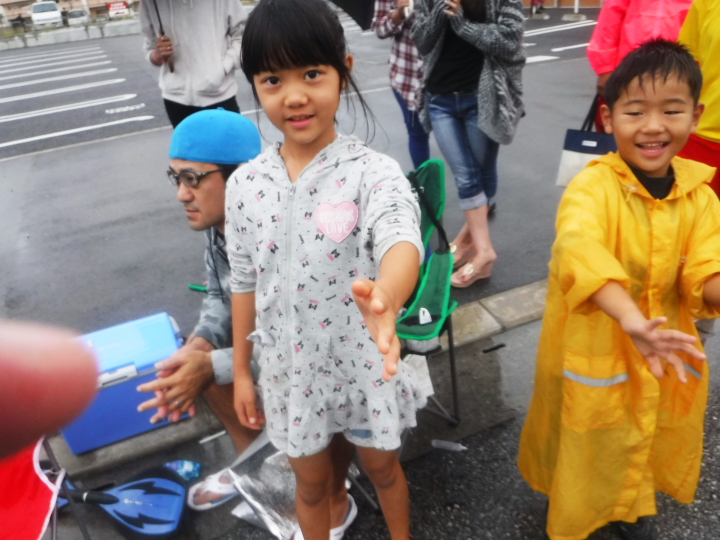 In addition, of course, finding “funny” runners who wear characteristic costumes is one of the pleasures at this event.  This year again, I found not a few well-prepared costumes! 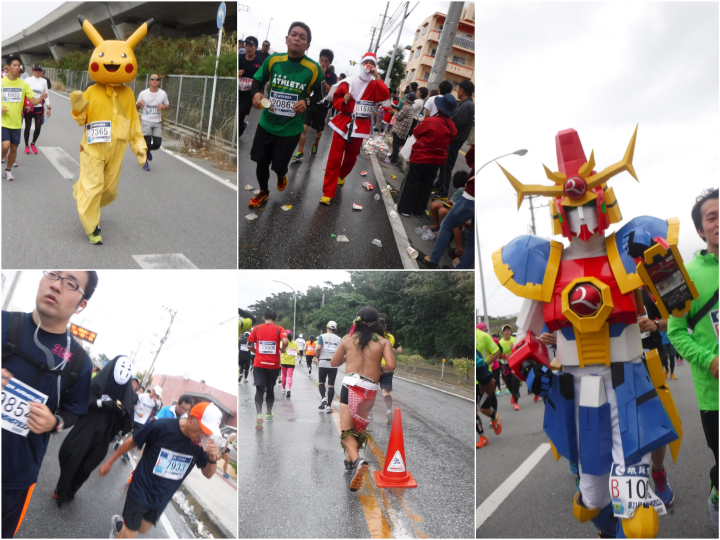 In the rain, quietly and patiently the runners head for the goal at Onoyama Sport Park in Naha City.  After all, rain never stopped until the finish time 15:15.  What is even worse is that the rain was getting heavier and heavier.  Still the runners went through the final straight road and the slope on Oroku Bypass, etc. to enter Cellular Stadium Naha.  Many runners ran through the finish line superbly! 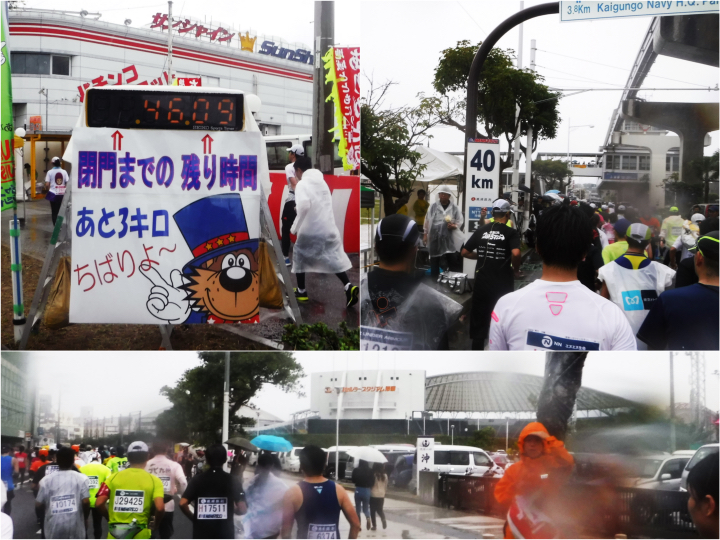 Due to the tough weather condition, the completion rate this year was 68.69%, which is 5.86% lower than that of the previous year.  Finishers showed all the more brightening smiles.  From the goal point to Certificate Issuing Center and Memorial Medal Station was filled with tremendous excitement in the rain. 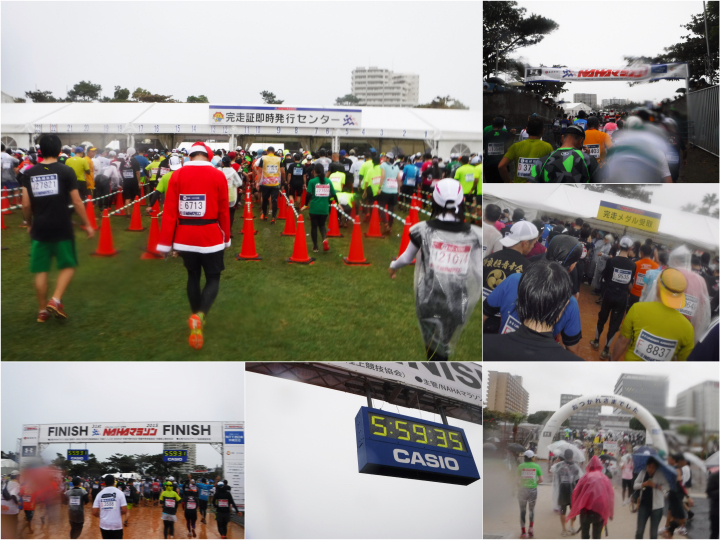 I, Kiwamu Ogawa, had had a touch of cold from a few days before the race.  On top of that, I pulled a muscle in the right calf.  Despite of the pretty bad physical condition, I managed to go across the finish line with the time of 5 hours 59 minutes 37 seconds at the 13709 place, which was the second worst in all of my records (out of 8 recorded times).   However, I could achieve the goal for every year of “I won’t walk in the race!,” which is a blessed relief. (LOL) 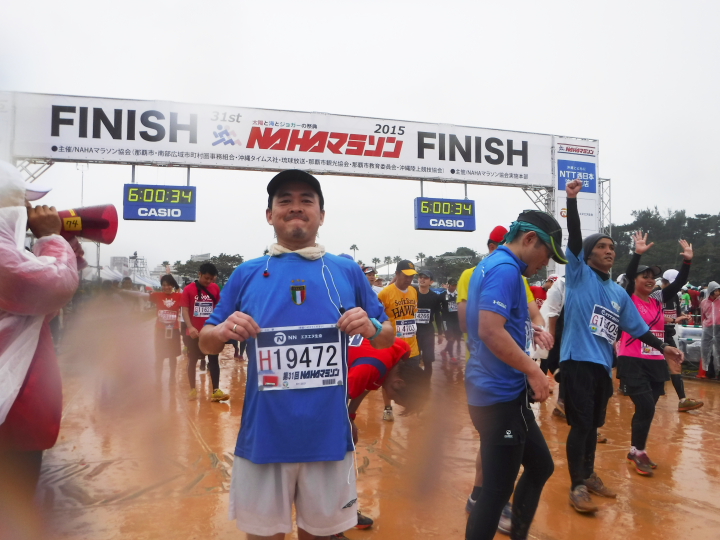 Keep running the long distance of 42.195km for 6 hours 15 minutes at most is a severe (and lonely) struggle.  You might be wondering why runners make an effort to do such a tough thing.  It is true that if you are talking about ordinary marathon races, but NAHA Marathon is totally different.  It is a special race, very different from other marathon races.  That’s right!  Once you experience the nationally or globally-rare, powerful cheers and yells along the road as well as kind help with full of love at the privately-built AID, spontaneously you feel like coming back to this race next year, too.  This makes NAHA Marathon very special.  That’s why it has grown up to be one of the largest marathons in Japan, and now is the giant citizen marathon race.
How would you like to try NAHA Marathon?  Maybe you can start with cheers and yells!  I would like Okinawa CLIP readers to experience the cheers “You can do it!” in the southern land in person.  You will be deeply touched and never forget the event! 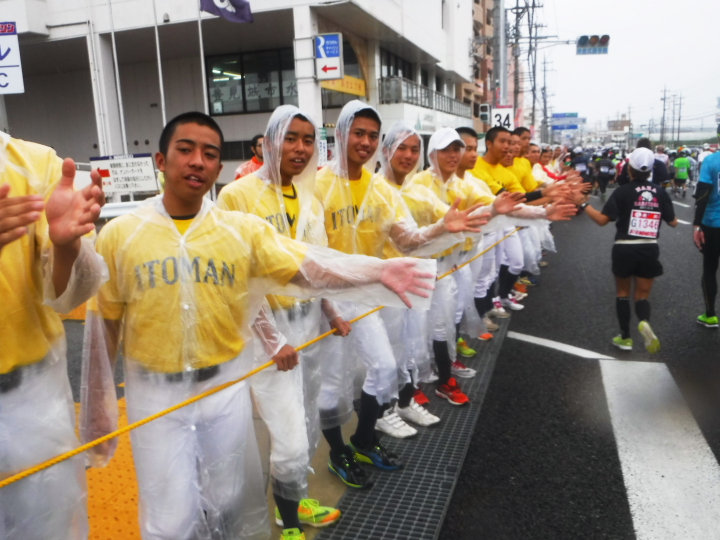 ▼Related Articles:
Moved to Tears by Warm Cheers on the Streets! “The 30th NAHA Marathon” Experience Report
4th Kouri Island Magic Hour Run in Nakajin-son, A Half Marathon with Picturesque Scenery and A Wonderful Sunset
Running Through a US Military Base and World Heritage Site at the 22nd Annual Okinawa Marathon 2014 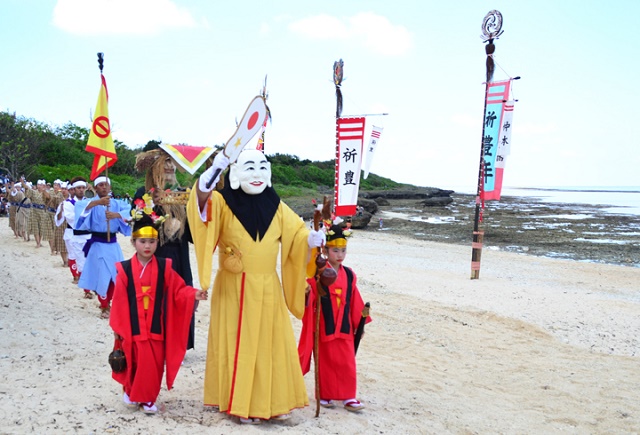 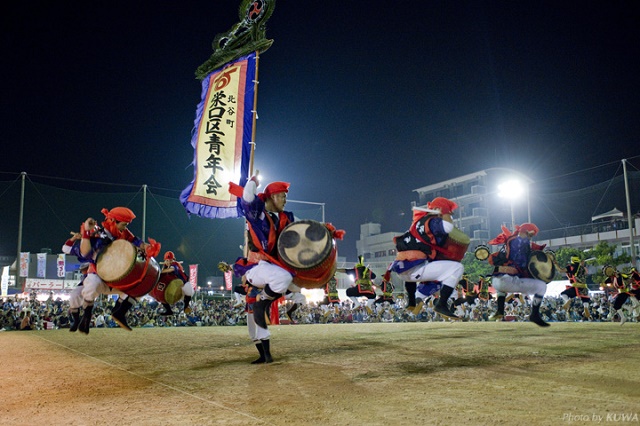 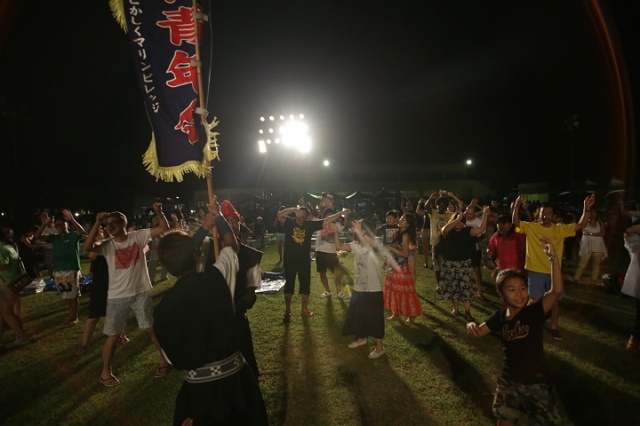 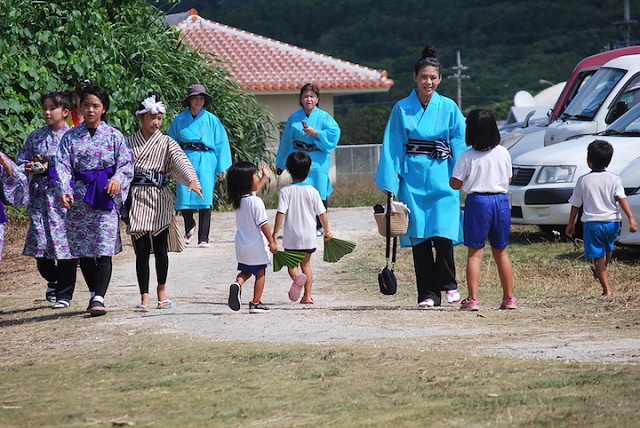 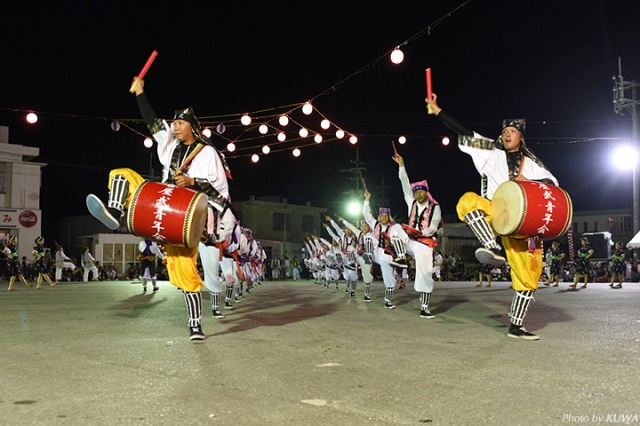