An Item Store to Feel the Lifestyle of Yonaguni Island 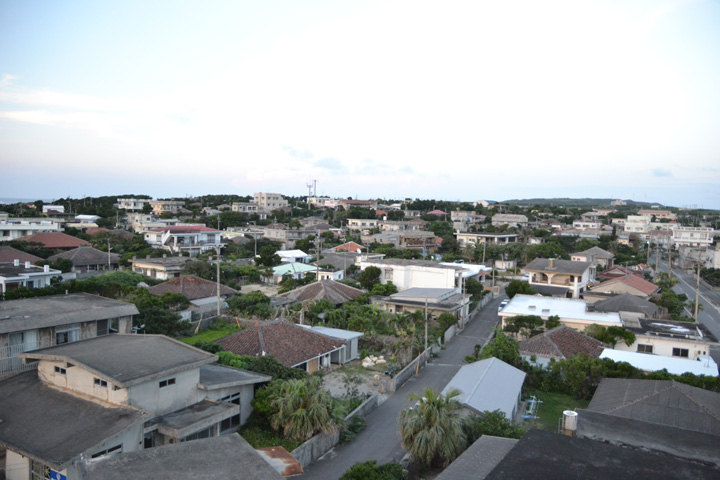 There are 3 areas on island of the border. Good items of Yonaguni Island are gathered at a store called “Zakka Sakura” in Sonai area.

Dyeing threads with plants of the island, weaving with the threads, making soaps with home-grown herbs… Items that reflect lifestyle of the island are lined up at Zakka Sakura. 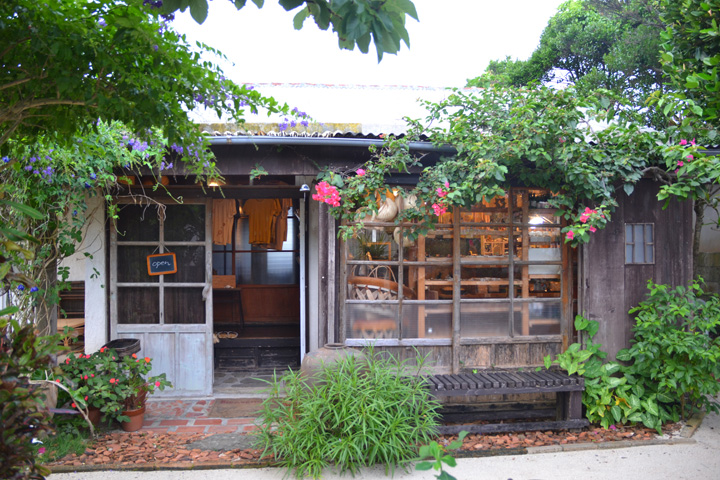 After entering a gate of the store which feels a sense of warmth, the owner Rumiko Inagawa welcomed me.

Rumiko is originally from Hokkaido, and she has been living on Yonaguni Island for about 20 years. She married to a man who she met on the island, and she lives with her husband and her son who attends at a junior high school. Her daughter, Sakura currently lives at a dormitory to attend a high school on Ishigaki Island. Rumiko's husband is a master brewer of a brewery which produces an awamori named “Yonaguni.” 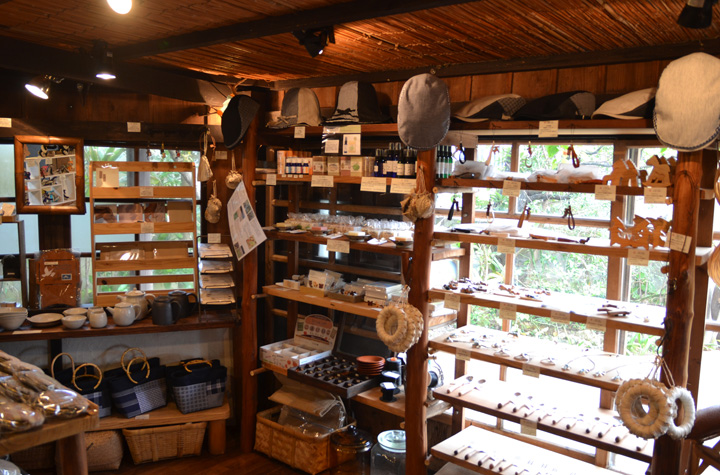 Rumiko opened the store 12 years ago when her children were still little. The reason why she started it was because she wanted to work at her house. 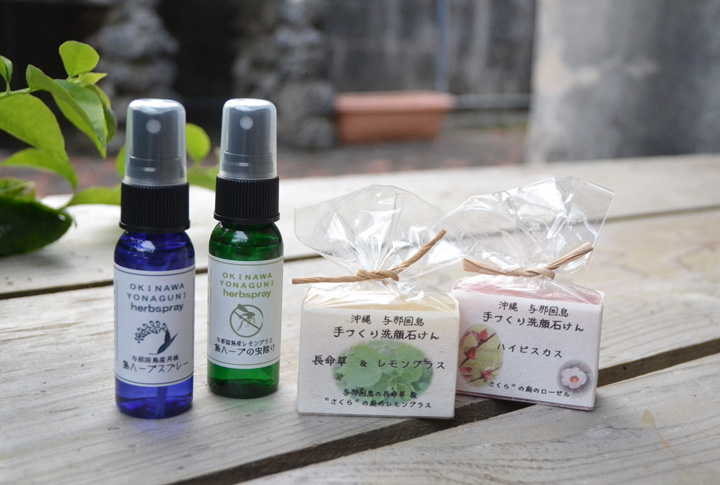 Okinawa Yonaguni Herb Spray’s characteristic is its floral scent. It is based on shell ginger which is grown at the garden of Zakka Sakura. Each Spray is made by hand at “Kobo Nagi” on Ishigaki Island.

There are 4 types of soaps: Peucedanum japonicum Thunb & lemongrass, hibiscus, salt & mint, and brown sugar. These soaps are made of the specialties of Yonaguni Island and herbs at the garden of Zakka Sakura. 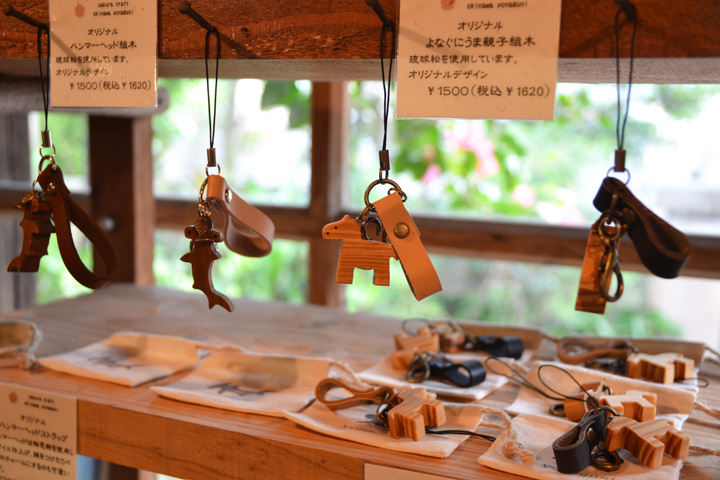 Original items of Yonaguni Island are available here, and the island made crafts and delicious food are also lined up.

Takeshi Ojii (grandpa), Rumiko’s neighbor, has been making traditional tools on the island. However, he gave them to his grandchildren instead of using them. 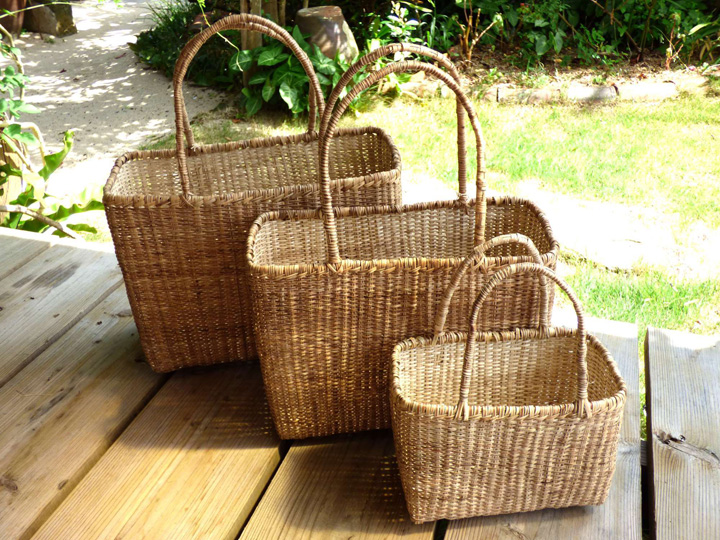 Rumiko made a suggestion to him, and she started to sell the tools that he made at her store. The tools became popular afterward, and currently she gets order from Mainland Japan. Especially, these baskets are popular.

Also, Rumiko works as a weaver of Yonaguni Weaving Association. 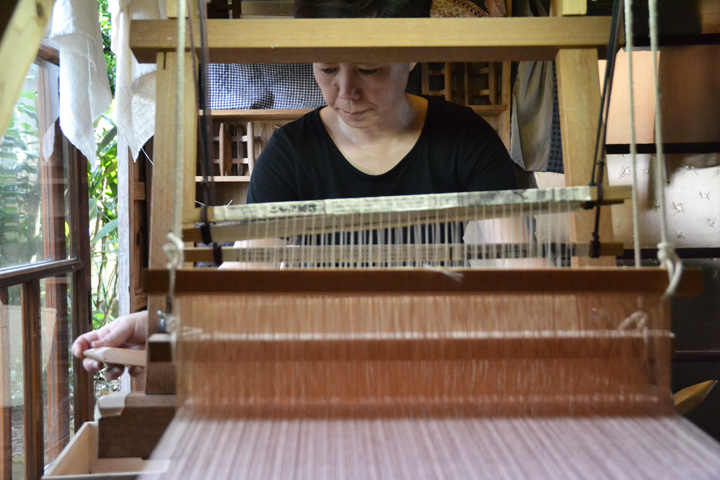 Weaving that she made every effort turns into porch, bag, and other products.
These products that she made can be purchased at not only Zakka Sakura, but also Yonaguni Town Traditional Craft Hall. 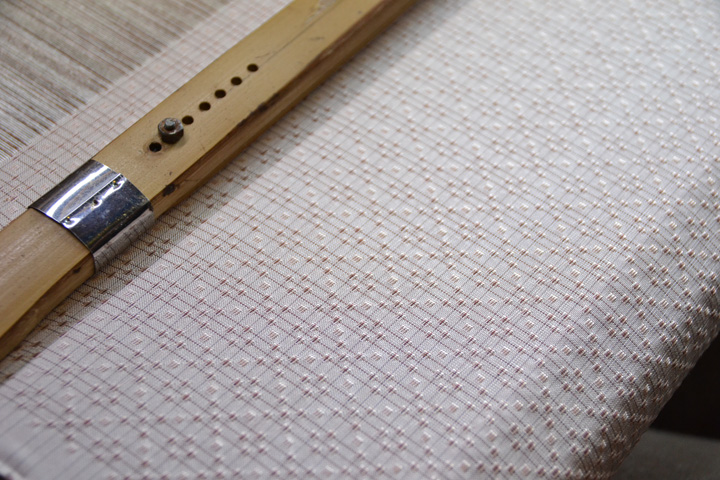 Yonaguni Hanaui (flower-patterned weaving) is a handmade weaving, and it is made of silken threads that were dyed with plants of the island. There is no division of labor for this work, so each weaver work on design, dye, and weave on their own.
The work to make Hanaui is very sensitive, and it seems like sensitivity of women’s feeling reappearing on it. 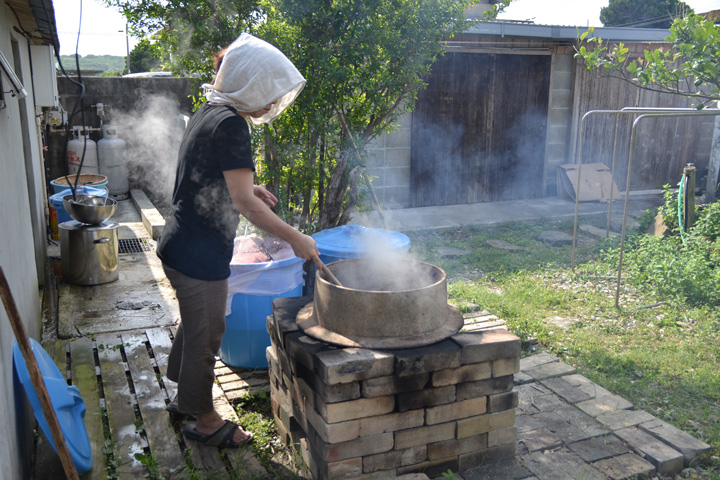 On the day I visited here, Rumiko was also working on boiling branches of a tree named Rhaphiolepis indica in a backyard to make dye. 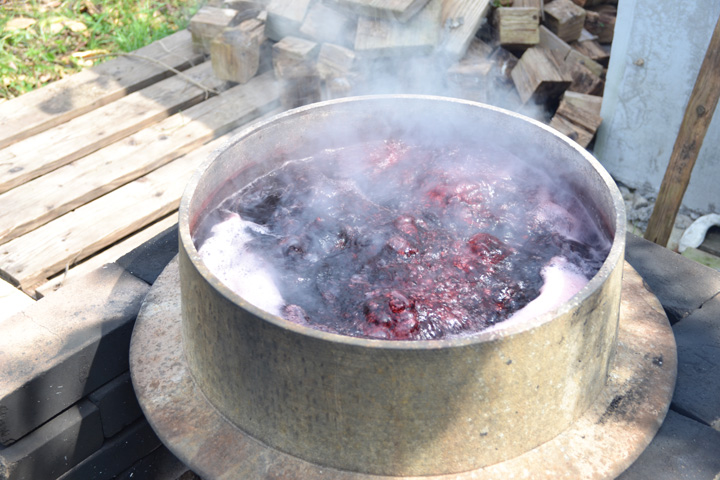 These branches were pruned in her garden. Weaving above was made of the threads which dyed of Rhaphiolepis indica. It can be colored from pale pink to dark red.

“Tourists are coming all the way to Yonaguni Island, so I want them to buy something which is characteristic of this island.” Rumiko said. 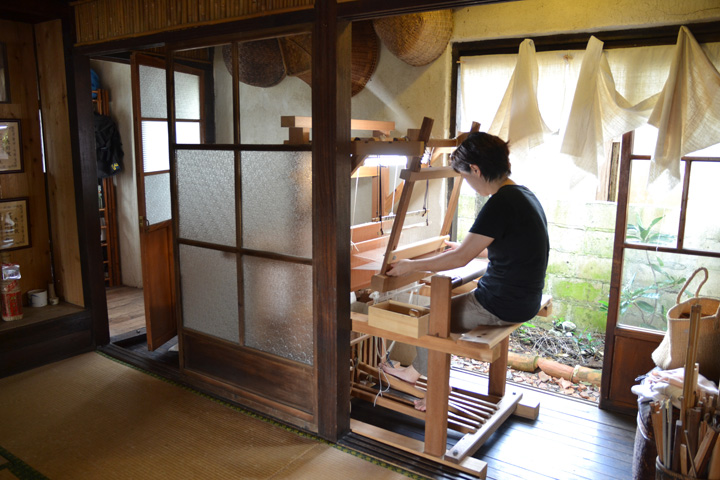 Besides Rhaphiolepis indica, trees of papaya, lemon, loquat, mint, and Japanese pepper are growing in the garden.

Some of the items are made of these plants, and some of them are used for cooking. Or soak them into awamori and use it as skin lotion. The everyday life to treasure the power of plants itself.

It makes me feel like visiting Zakka Sakura more and more to ask Inagawa Family to spare their valuable lifestyles. 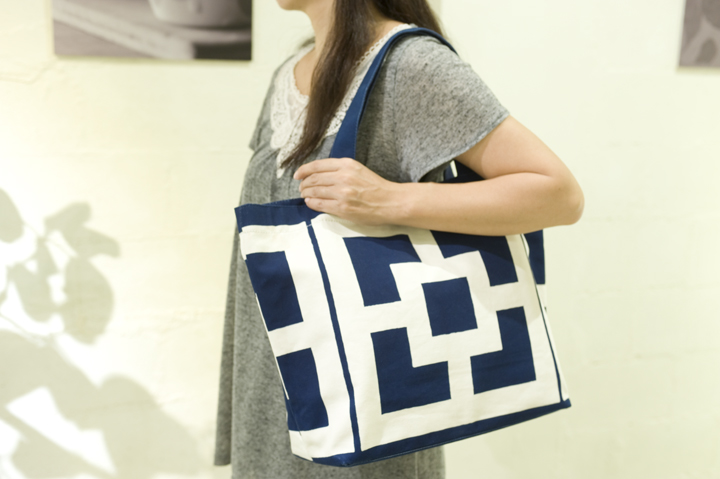 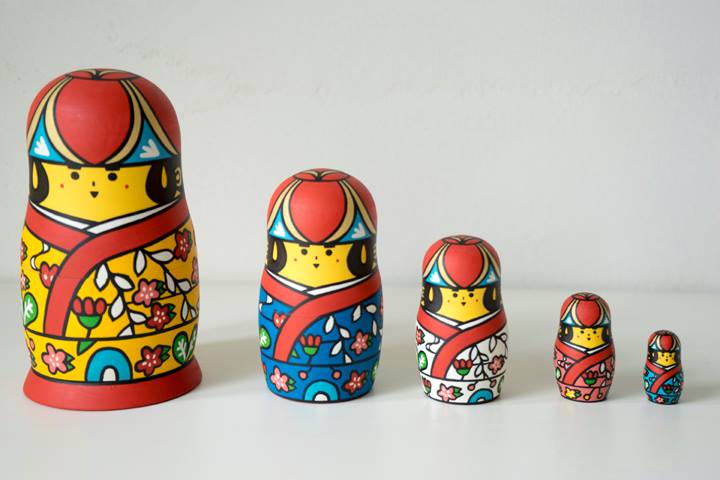 You Will Never Forget These Cute Souvenirs Once You See Them 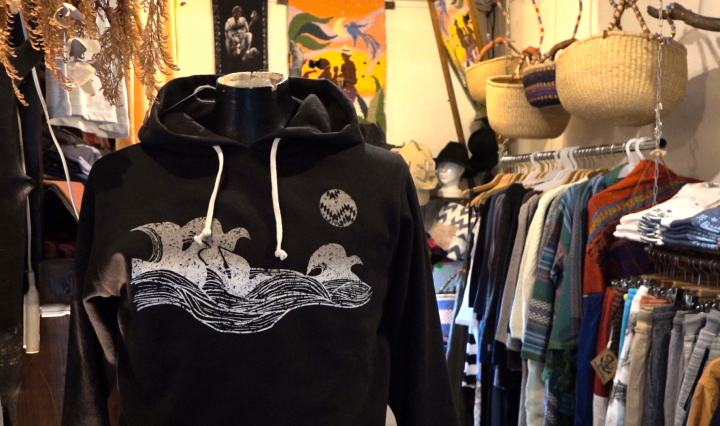 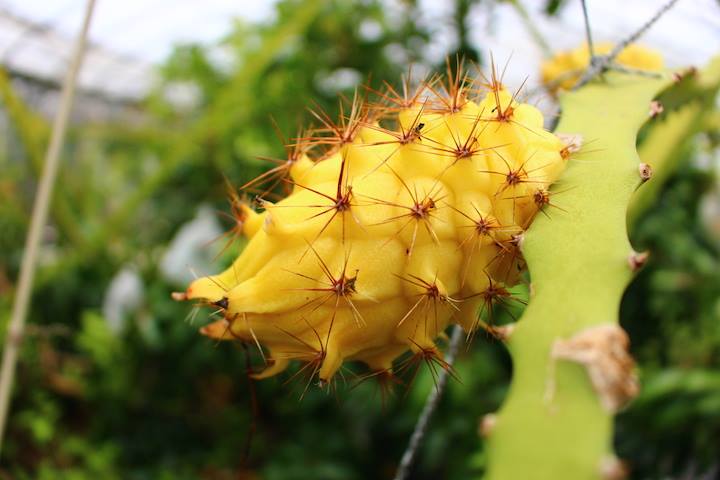 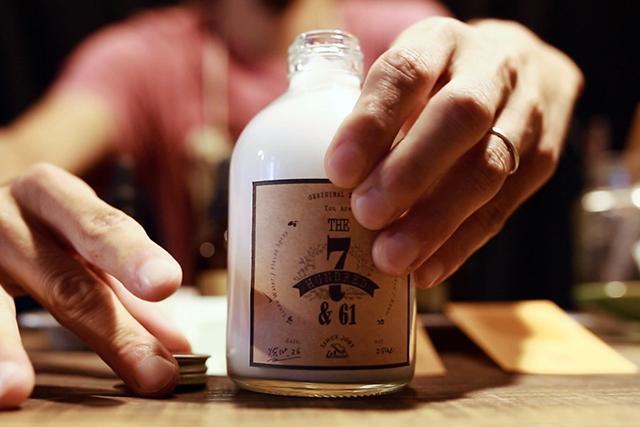