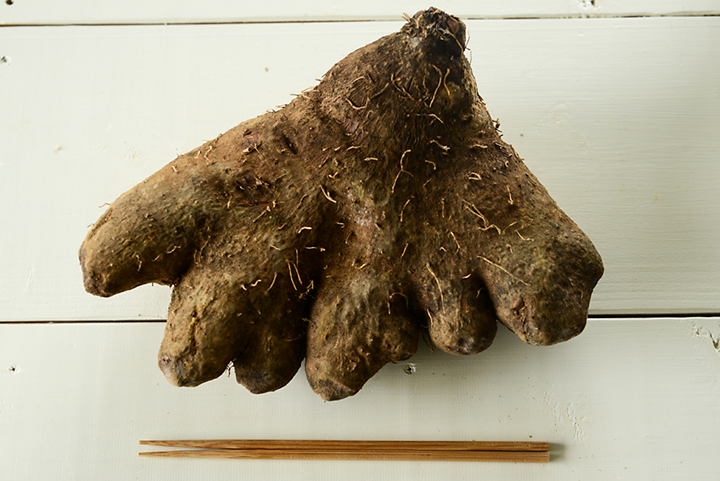 From the end of the year and into the New Year, it can get a little chilly even in Okinawa. Often found at the markets during this season are Yamaimo yams that are locally called Daijo or Taiwan Yamaimo. Although these yams are of the same family as the regular, commonly seen yams, they’re certainly a little…large. The one shown above is not a sample of an exceptionally large Yamaimo yam…These yams have unique shapes, with some skinny and long, and others like huge bear hands. Compared to the other yams, these have a stickier texture. 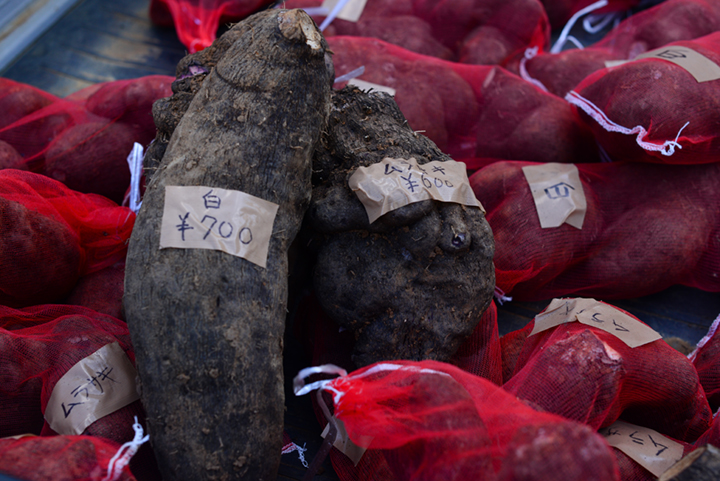 There are two colors, white and purple, and the white Yamaimo yams are often used for miso soup, stir-fries and deep fried dishes, while the purple yams are popular for use in confectionaries, taking advantage of the brilliant color and texture. Unless you’re an expert, it may be hard to tell which is white and which is purple when you see them on the market shelves, but they’re boldly labeled so that the shoppers know what they’re buying. 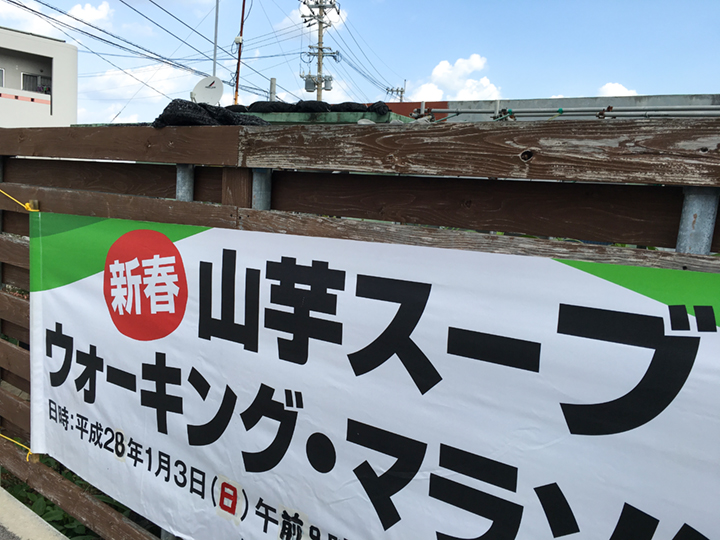 In Uruma City, where I live, signs pop up around town during the winter that says Yamaimo Subu (pronounced soo-bu). When I first saw these signs, I thought it was a mistake, thinking that they meant “soup”. But all of the signs clearly say “Subu”. OK, so it’s not a mistake…well then, what the heck is Subu? I asked around and a friend said, “Ah! Subu, right? They compete by weight”. After a while, I made the connection, as Subu is an Okinawan word for Shobu, which, in Japanese means “compete”. 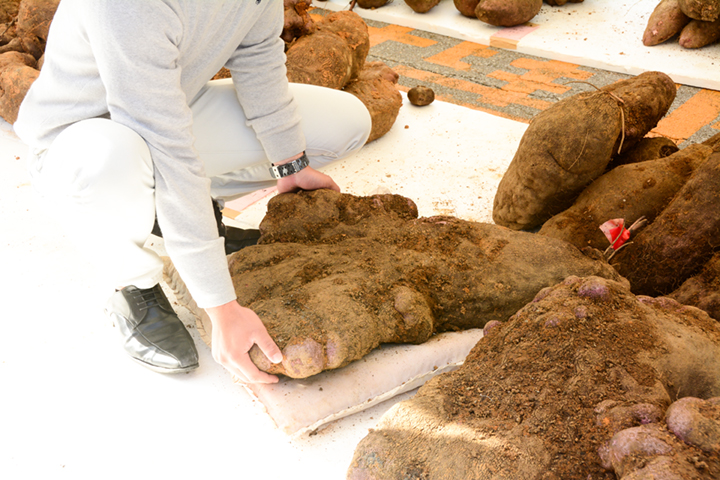 This competition is one of the highlights at the Uruma City Industrial Festival held every December, and many people come together to see the competition, as well as for the popular Ama SUN oranges. At the Festival, I walked around to see the yams up for competition, and found some that were as large as legs of a full grown adult! For the really large ones, they apparently use a power shovel to dig them out from the soil. Seeing these huge yams, I wanted to see them actually being dug out! 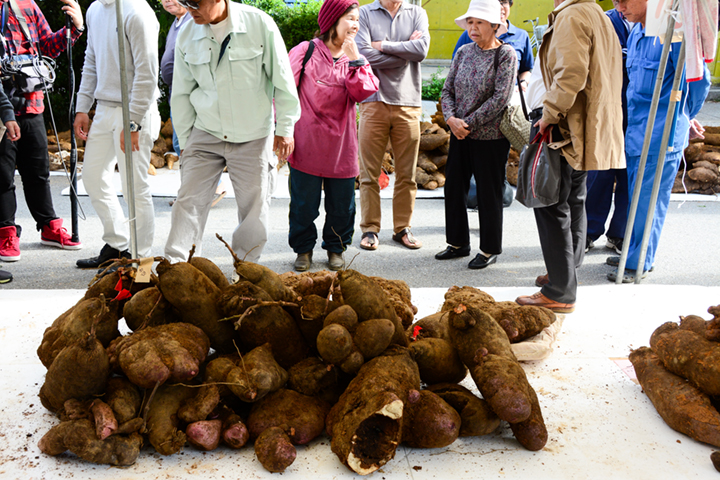 By the row of yams were crowds of people, a common sight at these Subu competitions. I wrote an article on these Yamaimo Subu before, about the Yamaimo fans of Uruma City aiming for the Guinness world record.

In this article, I want to introduce a recipe that I learned from a Yamaimo farmer I met at the Industrial Festival, which I tried. Even the locals, who know about the Yamaimo Subu that take place during this time of the year, don’t really know how to cook them because many think, “They’re so big, I wouldn’t know what to do with them.” So with that, I asked one of the growers the tastiest way to enjoy these large yams. They told me that they go excellent with Suchika (salted pork, a traditional preserved dish of Okinawa) in a stir-fry. Except the old farmer was somewhat vague about the recipe, so I added my own personal touch!! 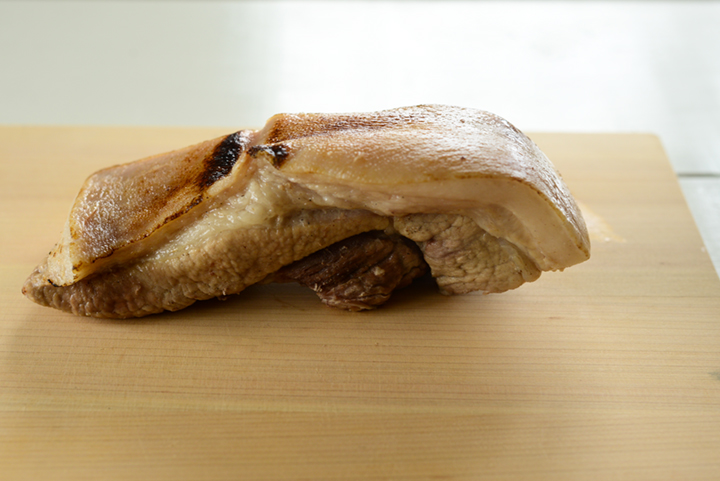 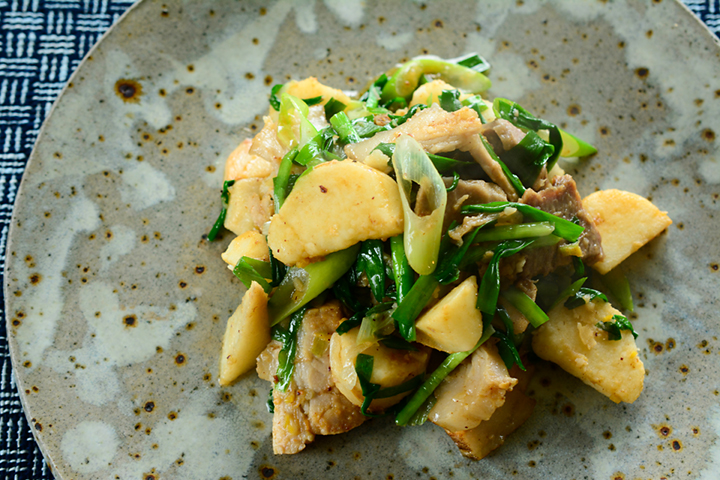 1. Thoroughly wash the Yamaimo yam, cut into pieces and soak in water with vinegar for about 3 hours.
2. Remove from vinegar water and rinse. Steam in a steamer for about 20 minutes.
3. Poke it with a skewer to see they’re cooked, and when done, remove the skin while the yam is still hot.
4. Cut them into bite-sized pieces (about 1cm).
5. Heat the sesame oil in a pan, sauté the garlic and ginger at low heat.
6. Once the garlic and ginger release their wonderful aromas, add the Suchika pork and Yamaimo yam and stir-fry at medium heat. 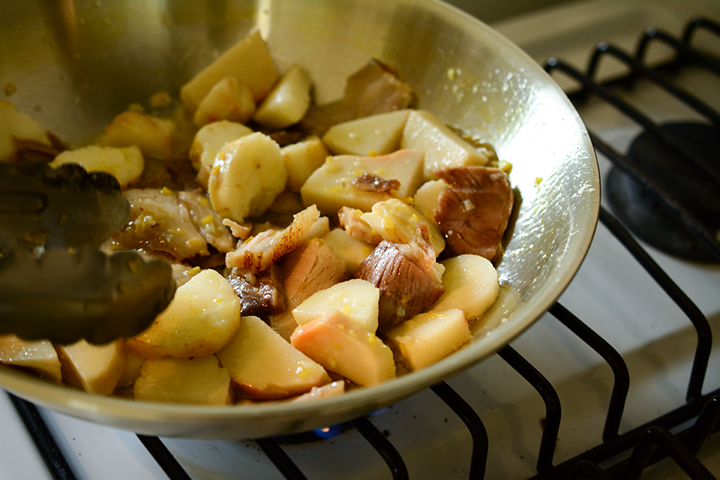 7. Once the Suchika pork and Yamaimo are heated, add the long onions and leeks and stir vigorously.
8. When heated overall, finish by adding the prepared sauce over the ingredients in a circle. 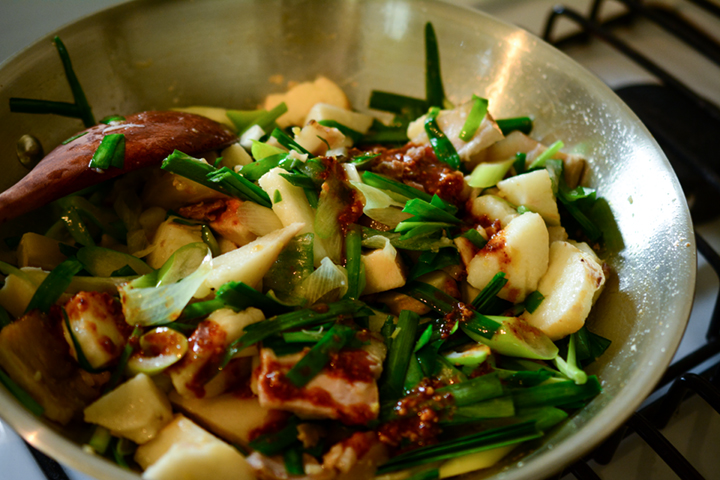 9. Once the sauce flavors all the ingredients, place the stir fry in a dish and serve. 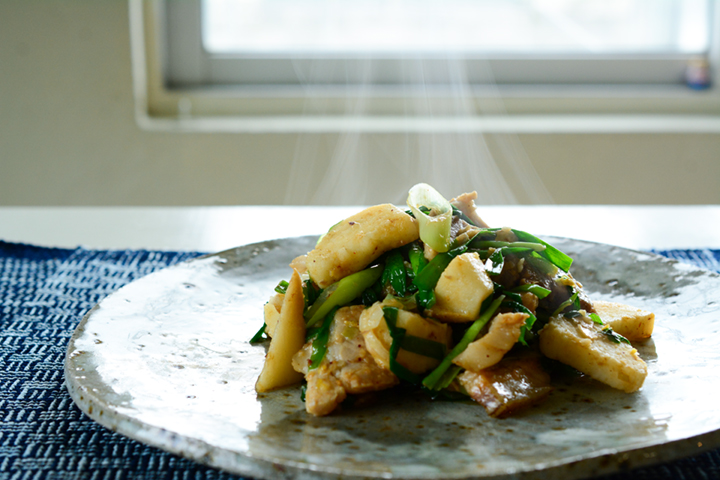 This “summarized” recipe worked out great, with the long onions and leeks adding to enhance the volume and heartiness. The miso sauce and the saltiness of the Suchika pork really went well with the fluffy texture of the Yamaimo. It was a perfect dish to go with beer.

I was worried that we wouldn’t be able to consume it all because it was so big, but the Yamaimo yam that we bought was gobbled up quickly at our house since they were great for various other dishes. If you soak the yams in vinegar water and grate them, they were just like Tororo, and you can powder them with starch and flour to make a delicious deep-fry or tempura, too.

For this time around, I chose to use store-bought Suchika, but some day, I hope to make homemade Suchika. I’ll be sure to write about it here when I do. 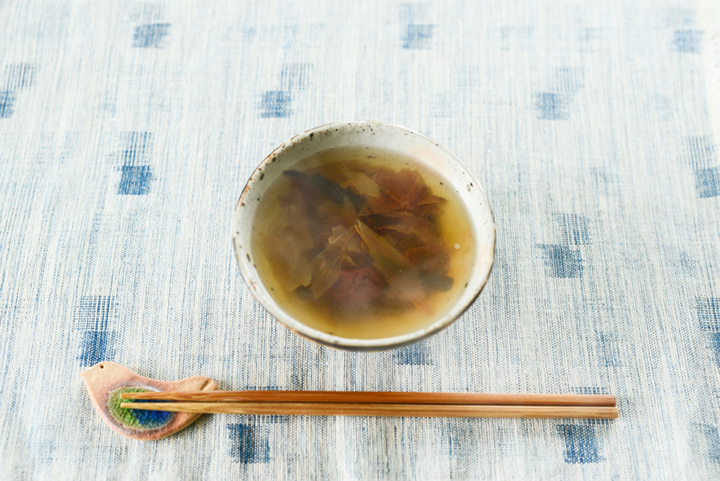 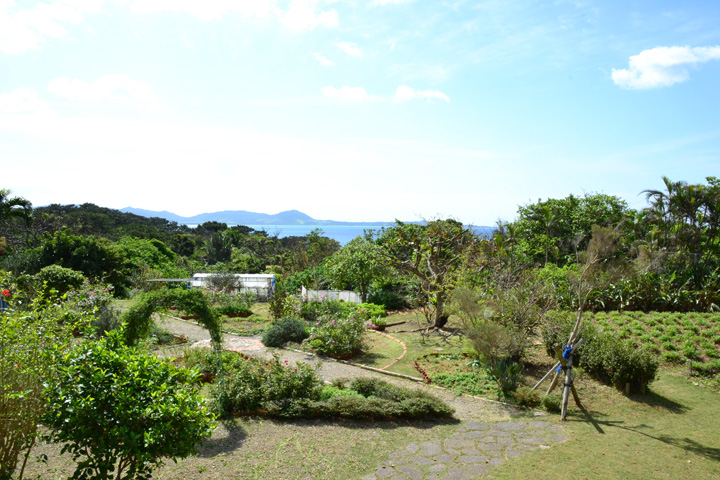 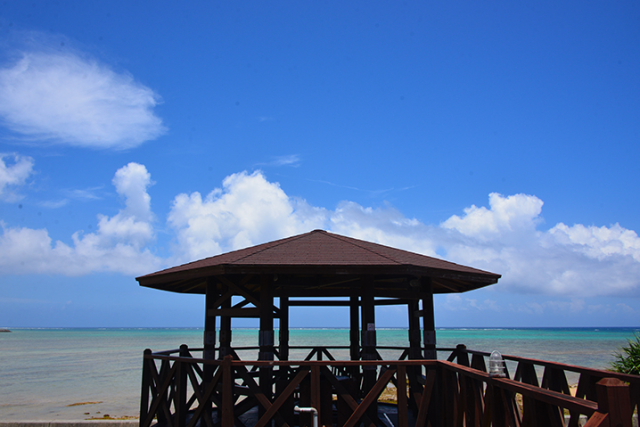 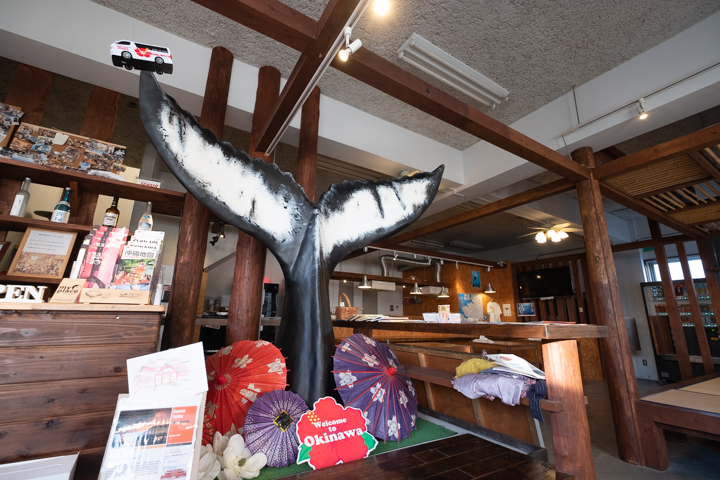 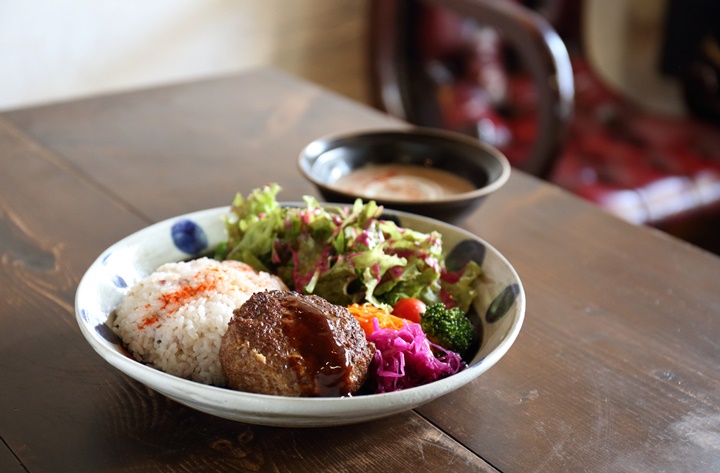 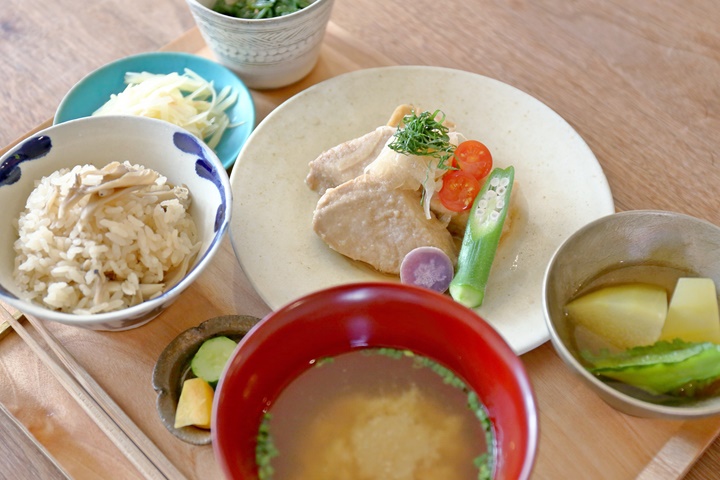 You’ll be Delighted with the Tastes of Home-Cooking Offered at [Fukumitsu] (Naha City), Found along the Narrow Streets of Yachimun Dori♪