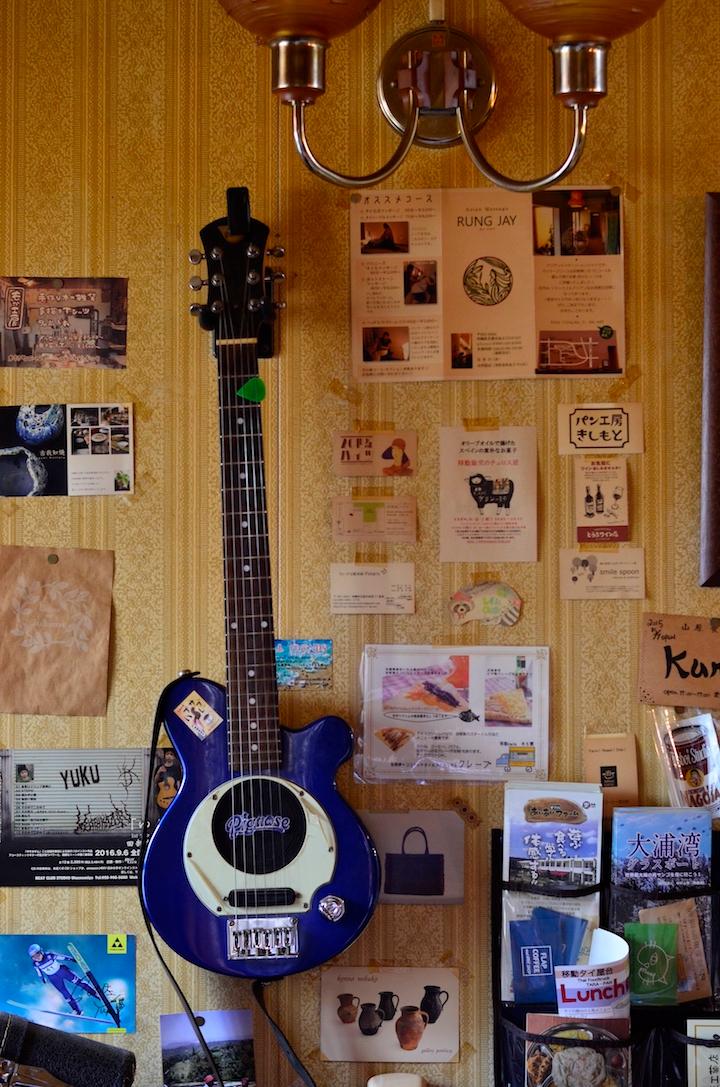 A little boy used to play catch by himself at the outside of his house. Inside his house, he enjoyed craft with a scissor and papers. After he started taking a swimming lesson to prevent asthma, he won the awards in the swimming competitions in the city. “I used to be a Jack of all trades and master of none.” Hiroshi Funada, the owner of a coffee shop “DONABE-COFFEE,” started telling me a story with his innocent facial expression.

“I was almost forced to take a piano lesson.” He took a cue from the piano lesson. When he was in a junior high school, he and his friends formed a band. He played a drum first, then guitar, and finally bass. They covered David Bowie and Mr. Big, and started to play original songs from high school. 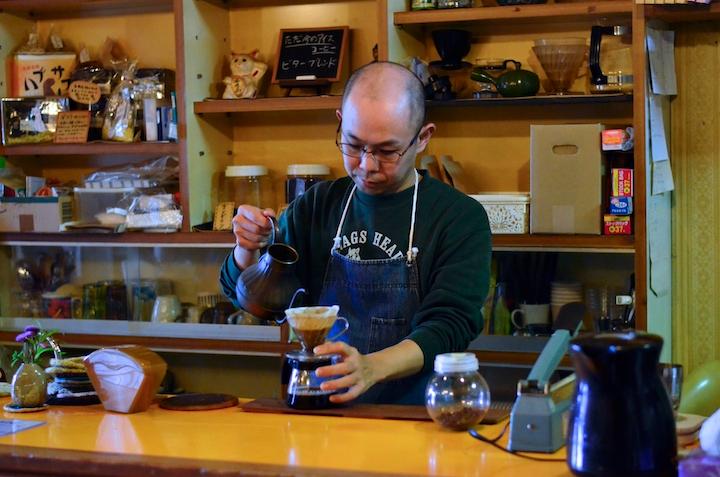 Funada majored in Social welfare in his university. Around the same time, he started to play his shows at clubs. One day, he met a woman at a show, and they played at the same show then. This woman was Maki from Okinawa, later she became his wife.  After he graduated from a university, he got a job in welfare field. It was because he wanted to do something good for people and needed a stable job to continue his music activity.

He quit his job about 4 years later to focus on his music activity. Later, he released 2 CDs from an independent record label and 1 CD from a major record label. A famous TV personality Tokoro George praised him as “the star in the year of 2007.” However, Funada got his job in welfare field again 2 years later. And, he encountered the Great East Japan Earthquake in 2011. 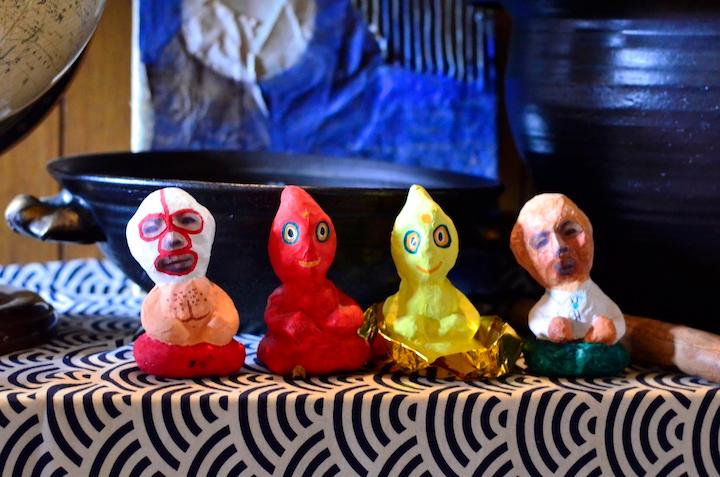 “I started to think that as long as I am with my family, others are options. I had no jobs and place to live then, but I believed everything will be okay, so I decided to move to Okinawa.”

His baby was 6-month old then. Right after the earthquake had happened, Maki and a baby moved to Okinawa, and Funada went after them in the late April of the same year. He and his family started a new life in Okinawa with no friends and connections. Until then, his only connection to Okinawa was his wife, Maki. He was not interested in Okinawa particularly, and he only came to Okinawa when he met Maki's family before they got married. Also, he had never been to Okinawa for a trip either. 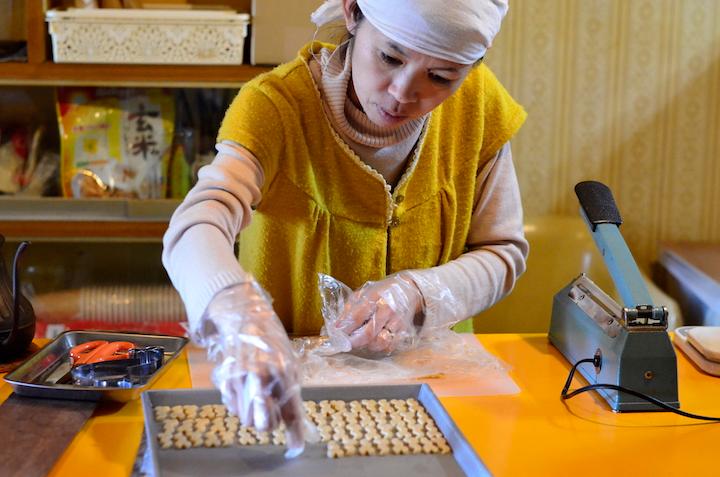 “I had nothing to do with Okinawa, but I knew that there was not much jobs in Okinawa. Also, I had heard about the ground battle of Okinawa and the U.S. military base issues. Right after I moved to Okinawa, I went to the Cornerstone of Peace in Itoman City to pray for victims who lost their lives during the war. I knew I can’t live in Okinawa as long as I feel like a tourist, so I also went to Okinawa Prefectural Peace Memorial Museum to learn about the past and feel Okinawa. I don’t like to talk about politics, but I can’t play ignorant. I don’t think I can live here without Maki. Plus, I don’t know Okinawan language. Every time I worried about something, I could ask her why and how, so she really helped me a lot.” 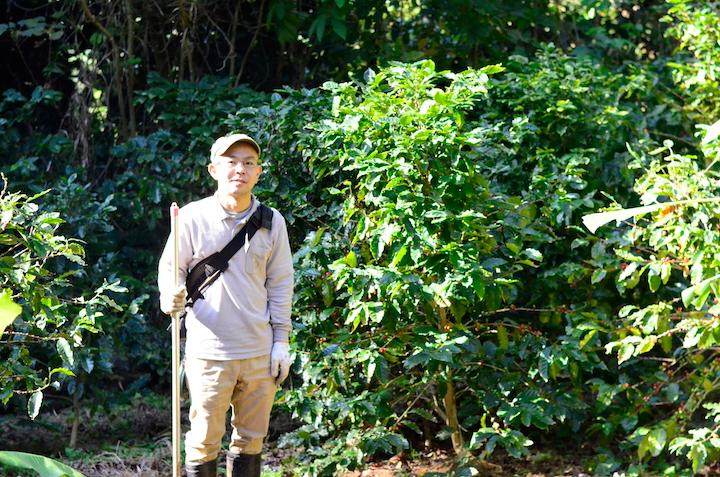 “To live in Okinawa, I wanted to live in Yanbaru area with rich nature. I stayed at Maki’s house for a while, and found a house to live and job. Later when I had time to spare, I decided to rent a farm and grow coffee.” He always wanted to involved in coffee for his job. Actually, he was not interested in self-sufficiency or agriculture, but he started to get involved in cultivation, refinement, roasting, and extraction on coffee even more after 3.11.

Unlike the apartment, he could not find a farm right away. After a short time, his co-worker’s relative suggested him to borrow a farm. Actually, connections do matter in Okinawa. 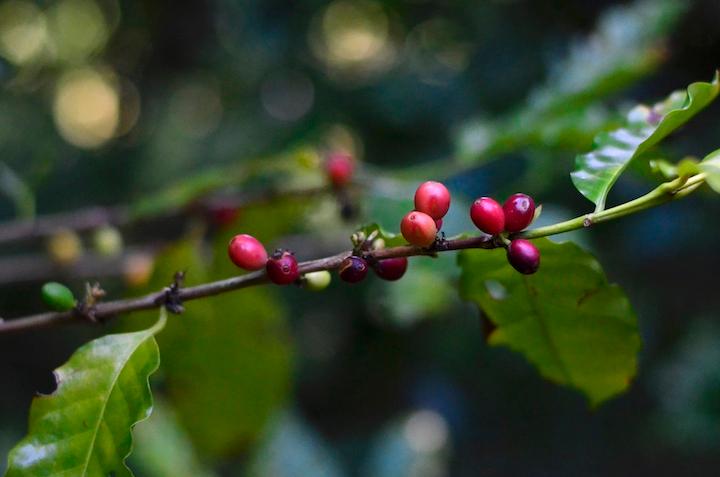 Since miscellaneous big trees were growing in the farm at that time, so he needed to start from pulling out trees and plant coffee trees. It took 2 years to finish pulling all out.

“It will take about 3 years for coffee trees to bear fruits, and 4 – 5 years to bear enough amounts of fruits to drink coffee. Coffee trees get fall down even when the light wind blows, so they fell down every time typhoon approached Okinawa. Some people raise trees again, but I tend to leave them. By leaving them down, new branches grow and they transform into trunks. I realized that plants work very hard to adjust to an environment to grow by leaving them alone. I have to roast coffee beans and manage my shop. In a meantime, I learned how to ease up on my job in a good way naturally. I need to thank coffee trees for teaching me the lesson.”

Of course, he got confused few times after he moved to Okinawa. “I would say sense of time. Have you heard of ‘Uchina time?’ I asked for an estimate to a company, but it took many hours or days for me to get it. It doesn’t bother me much, but I felt some kind of time lag. Also, I felt a sense of alienation because I am from Mainland Japan.” 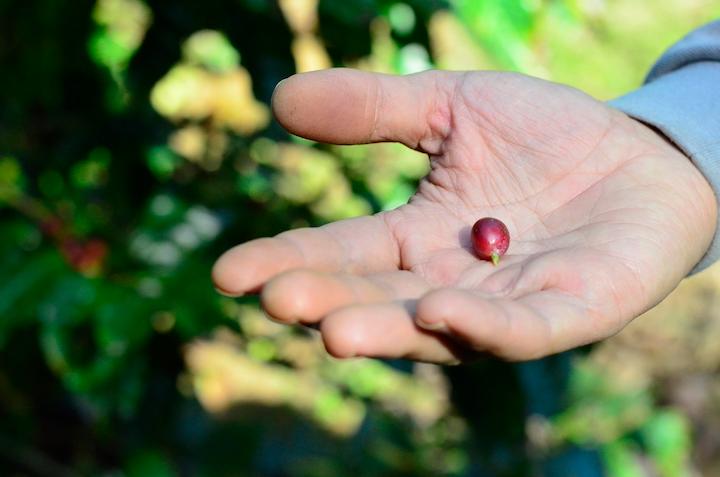 On the other hand, he felt fresh in cultural difference. “In my farm, there is a spot to pray for the God. After I started growing trees on my own, I got interested in the Okinawan lifestyle which follows Chinese calendar. I recognized that the transition of seasons in Okinawa follow Chinese calendar truly instead of the solar calendar, and also the amount of crop differs depending on phases of the moon. I have been learning many things day by day.” 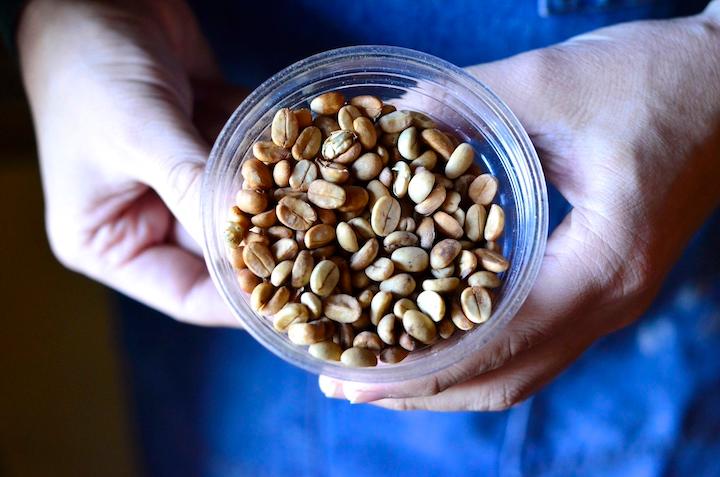 “Something has changed after growing coffee trees on my own. When I roasted beans in Kanto region, it was natural to eliminate bad beans because they affect the flavor of coffee. After I grow coffee trees in my farm, I realized that it is natural to have bad beans. Also, my past experience in welfare field and discovery in agriculture are connecting. I started to think about the difference between good and bad, and what is usual exactly. It is usual for me, but it might not be for others. Usual things for Okinawa are not usual in Mainland Japan. It was kind of shocking to me…” 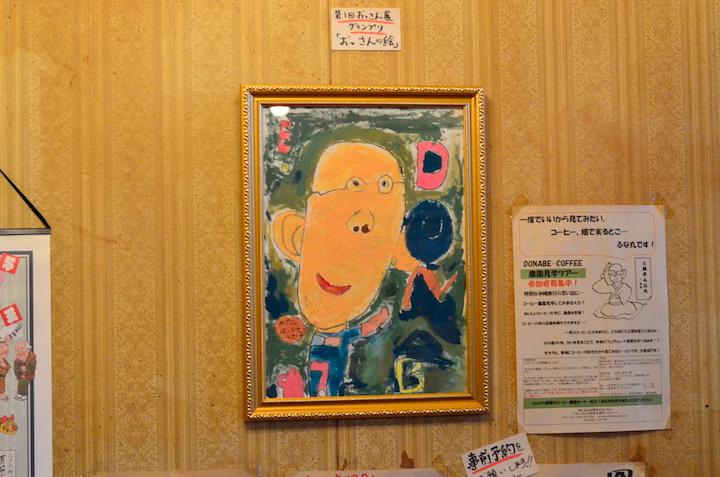 The way to spend his off days also has changed.

“I spend time with my family on off days. I used to use my free time for music and coffee when I was in Mainland Japan. There are many good parks in Nago City, and some of them have good views. My kid loves park, so we go to parks very often. The view toward beaches also has changed after I moved to Okinawa. It is the spot to purify myself, not a spot for swimming. My kid prefers to swim in the pool more than beaches. Luckily, my kid is growing up as an active kid. I kind of worried about higher education in Okinawa, but this place is very good for emotional development. I am glad that my kid grew up as a good kid.” 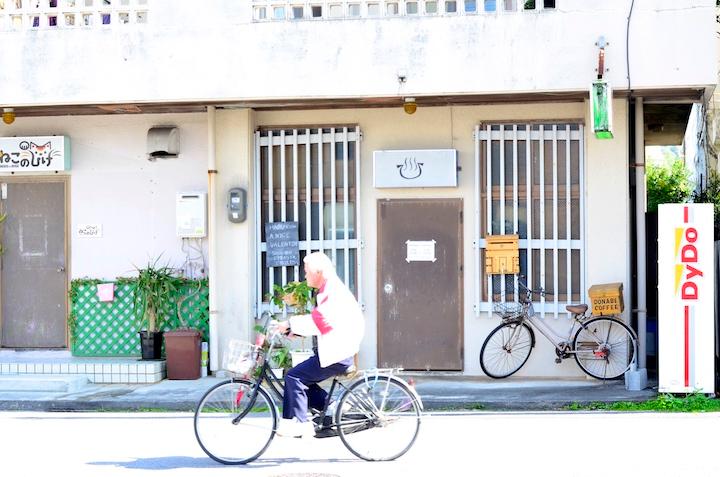 At the end of the interview, I asked for an advice for those people who are planning to move to Okinawa in the future.

“The best way is to stay in the area for a while, walk, and talk to residents to see if they were able to live in the area. They might not do it on purpose, but some people cause troubles to residents. Just like the saying, ‘When in Rome, do as the Romans do.’ It is good to be honest, try hard to be accepted in the area, and work hard for residents. Probably it is better to hide the aspiration to live in Okinawa in a good way. Some people decided to return to Mainland Japan because it was totally different than they thought. Also, some people come to see me to ask for some advices on growing coffee trees in Okinawa. But it is important for them to stay in Okinawa first because it is important for them to learn about the reality. They might struggle at first, but it will help them to feel comfortable being in the area by connecting with residents and the area. When they started to complain about little things while they are living here, that is the sign that they started to get used to being in the area.” 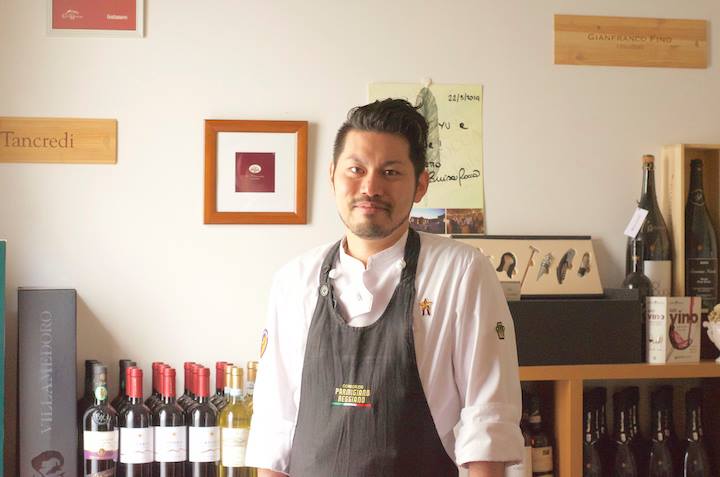 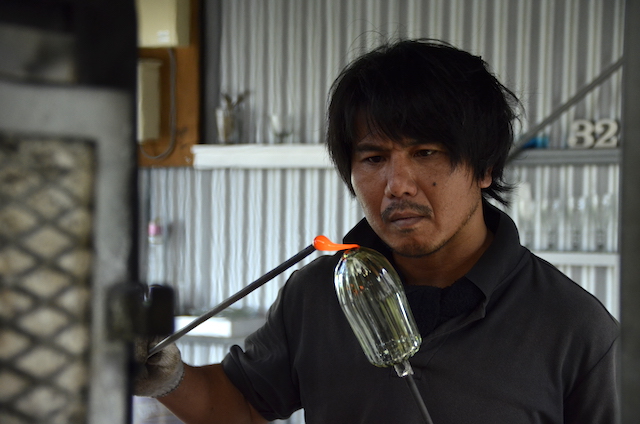 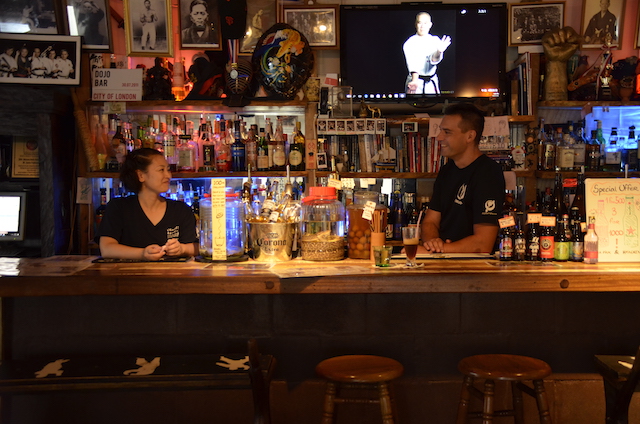 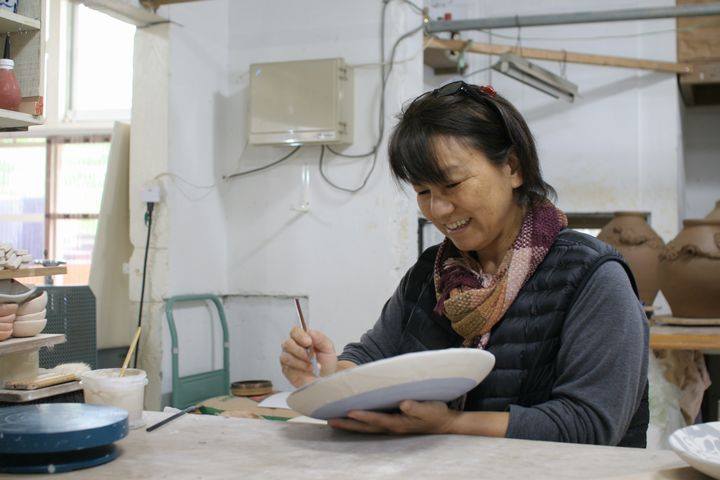