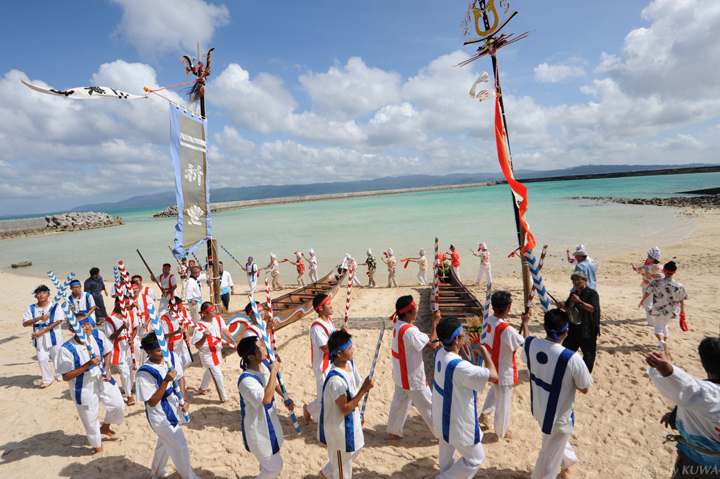 Hounensai is a traditional ritual to pray for rich harvest, abundant catch of fish, and prosperity of the island. On Hatoma Island, the festival was held for three days totally. 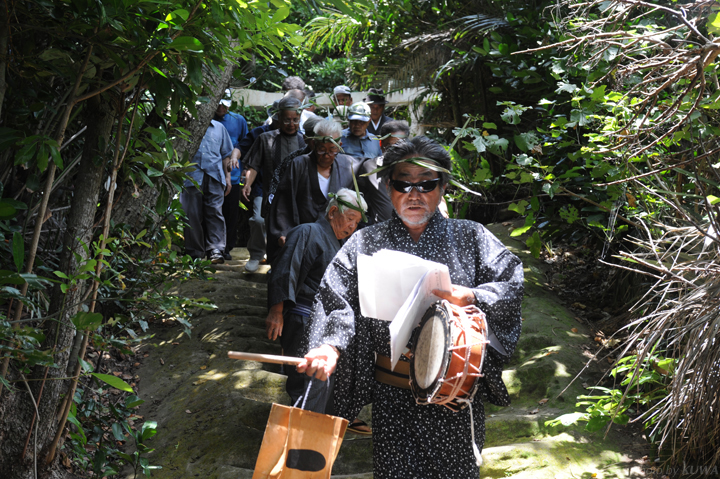 Hatoma natives who live in other regions of Japan come back to participate in the festival and join together with the islanders to pray to the gods for the prosperity of the island.

Especially “Yudushi” on Day 1, they stay at the sacred place of the island throughout the night, praying to the gods and singing and dancing in dedication to the gods. 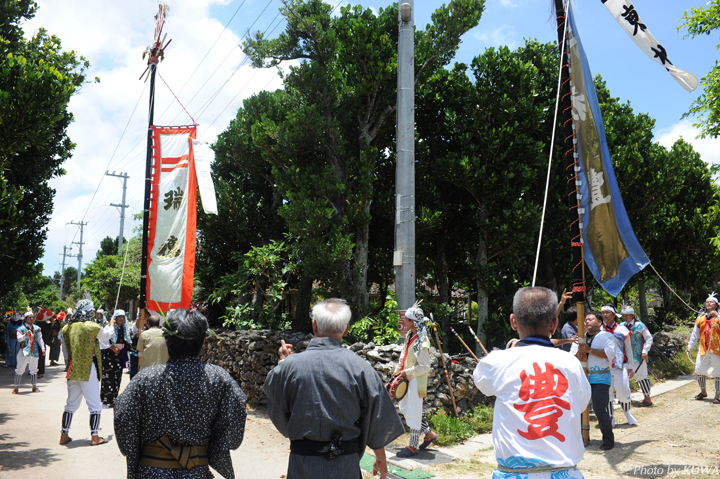 For “Thupin” on Day 2, a variety of performing arts are dedicated to the gods, which makes the most crowded day of the three days.

After noon, ujiko (shrine parishioners) from each sacred place come to the island’s largest sacred place while chanting prayers.  Following that, the hatagashira (flag pole carriers) from the west village and the east village join them to head to the square where performing arts will be dedicated. 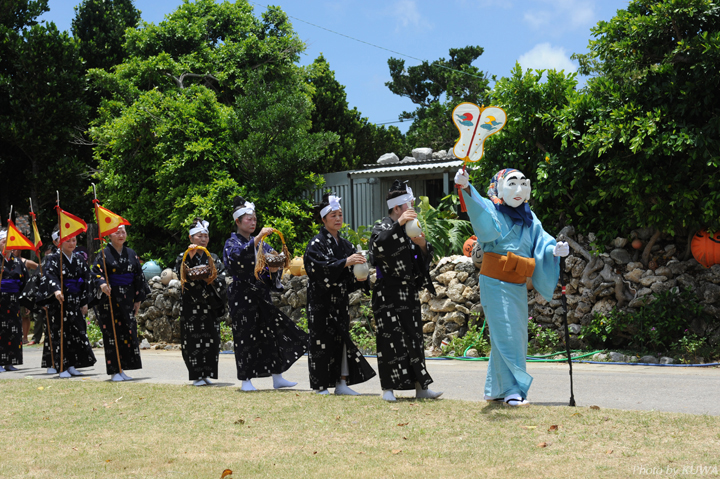 Performing arts dedicated to the gods starts with a procession welcoming a miruku god, who is worshiped as a visiting god bringing happiness.  Then, there will be a celebration called “kamuraama” for children who forge the future of the island. 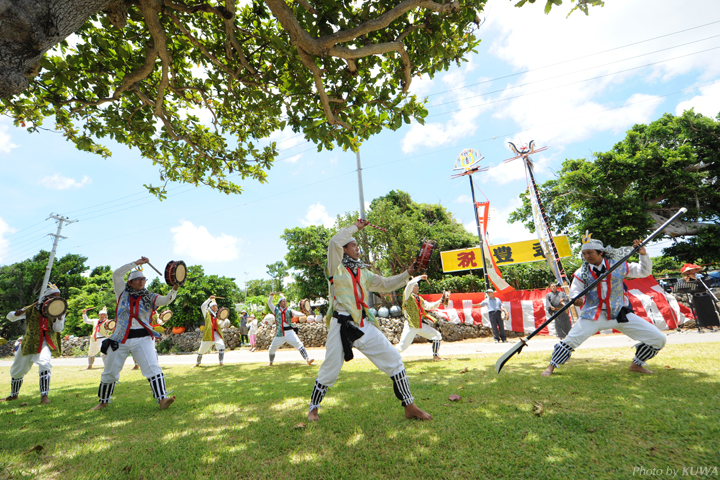 The most powerful performance is bojutsu (a martial art of using a staff weapon).
They say that the local people used to be proud of being chosen as a member of bojutsu or haarii (dragon boat race) at a rich harvest festival.
An attractive aspect now is the participation of elementary and junior high school students in bojutsu.
The total number of their small elementary and junior high school is 10, but these young students are import members for the island.
A student who just entered the school this year also mastered bojutsu for only several months under the guidance of the island’s leaders. 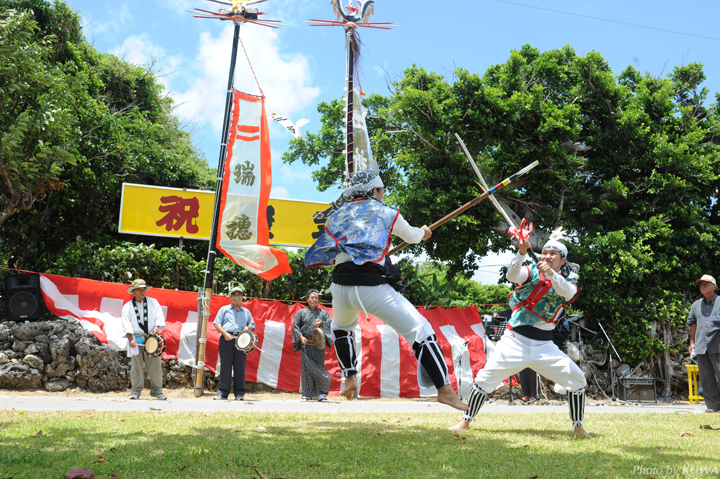 During bojutsu performance this year, they performed so powerful that a staff weapon was split in two over. 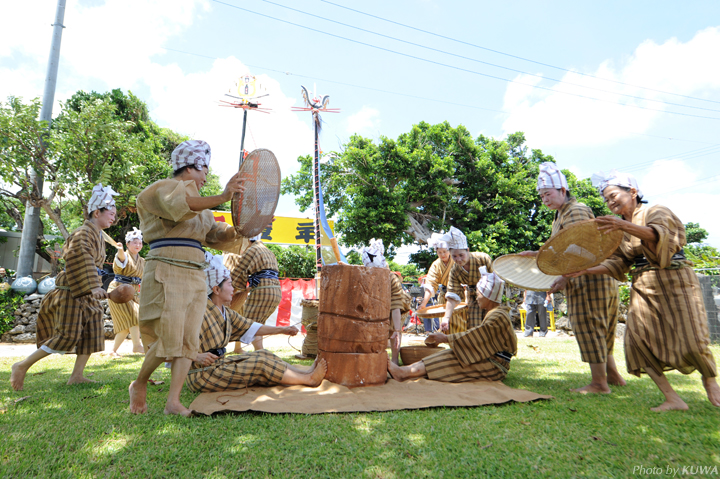 In addition, “mamidoma” is performed as dedicated performing arts for wishing a good harvest.   “Mamidoma” is a traditional dance unique to Yaeyama Islands, in which you can see movements of their farm work. 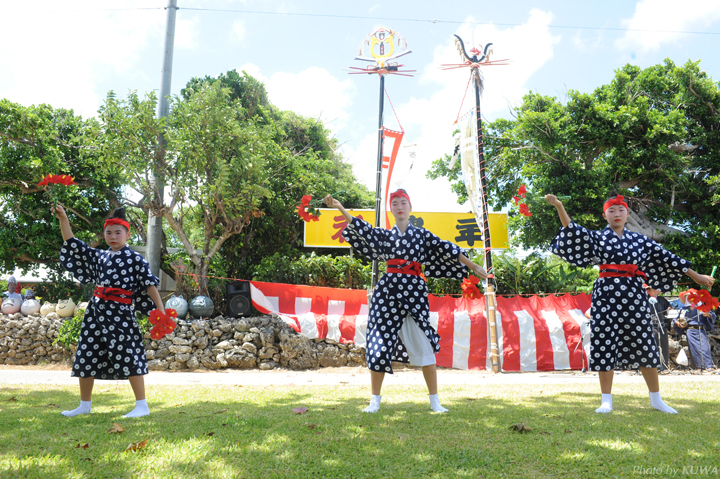 When children from kyouyukai* living in Ishigaki performed a cute dance. o-hineri (coins wrapped in paper) fell down onto the stage.

kyouyukai* (social organization for people originating from the same town, village, or island who live in an urban center far from home (predominantly used by people from Okinawa)) 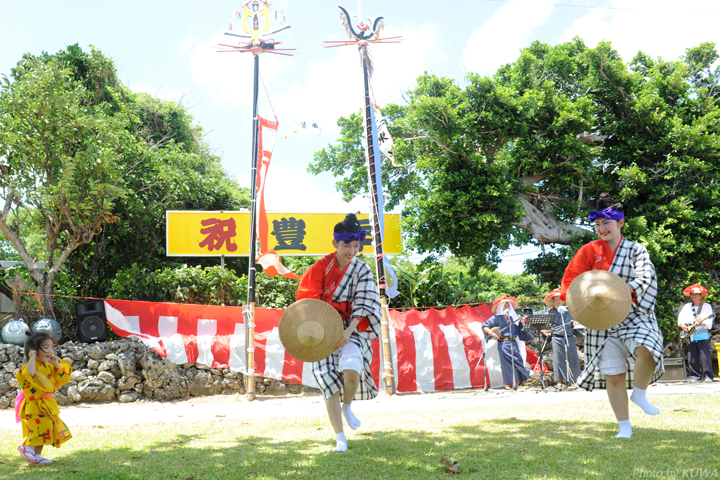 Island’s kids suddenly joined young ladies’ dance, which boosted the event mood.  That was a heartwarming sight to see. 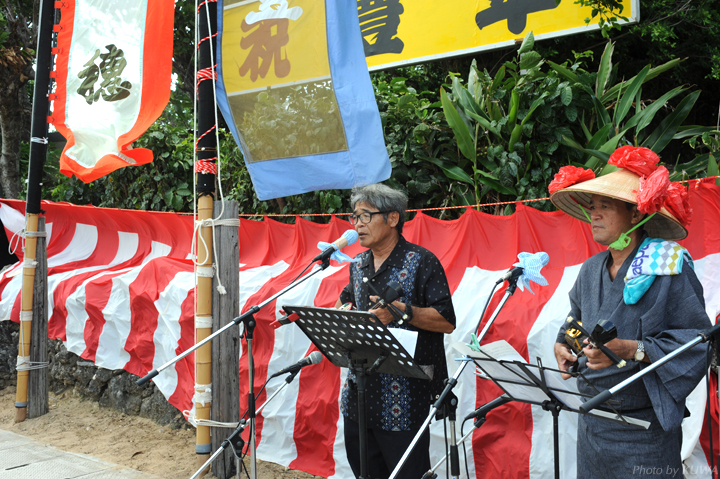 Also Mr. Isamu Kajiku, a popular singer of Hatoma Island, whose live performance of song and sanshin (Okinawan three-stringed instrument) is one of the highlights special to Hatoma Island.
His signature pieces such as “Idabune,””Hatoma no Minato,”etc. were performed with dance by kyouyukai, and during the haarii race by sabani at the climax of the festival, he took the lead by beating a gong. 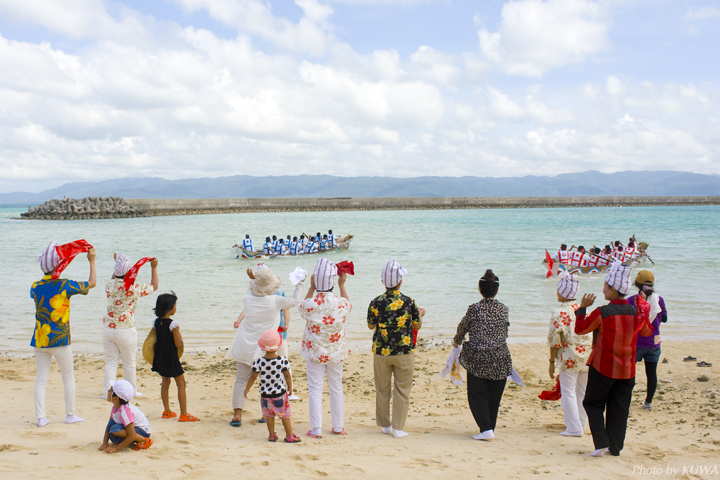 For the haarii race, the west village and the east village competed with each other to win a celebratory trophy given by the director of the public hall.  But after that both the team members were friendly united into one no matter which team won the race.
It was very impressive to see them walk along together, surrounding each team’s sabani boat. 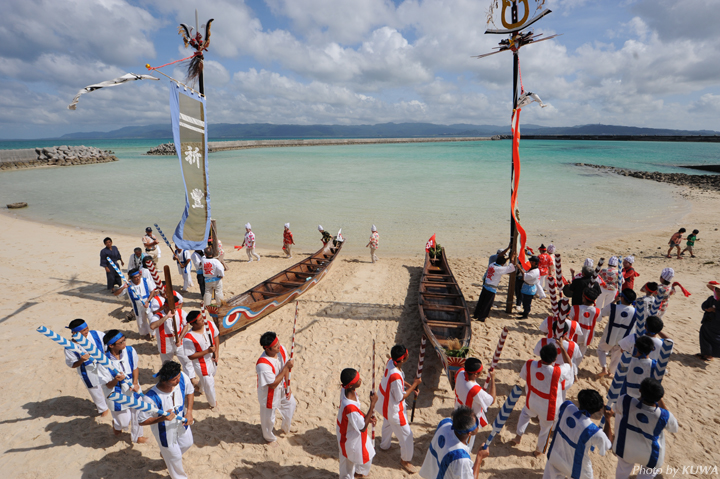 And on final day, the tug of war is held.
“Everybody including tourists can participate in the tug of war,” said Mr. Touji, the director of the public hall.
Why don’t you join the hounensai festival on Hatoma Island next year? 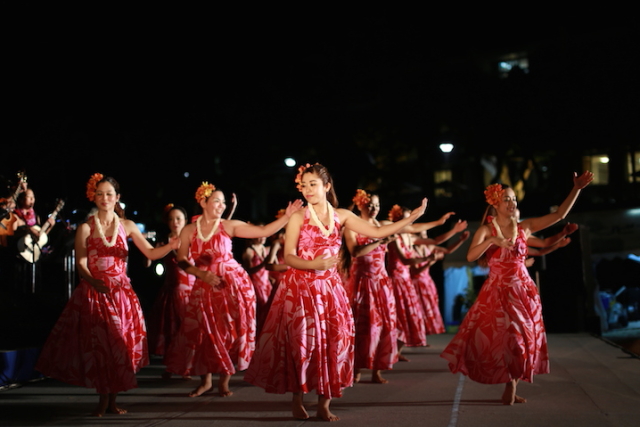 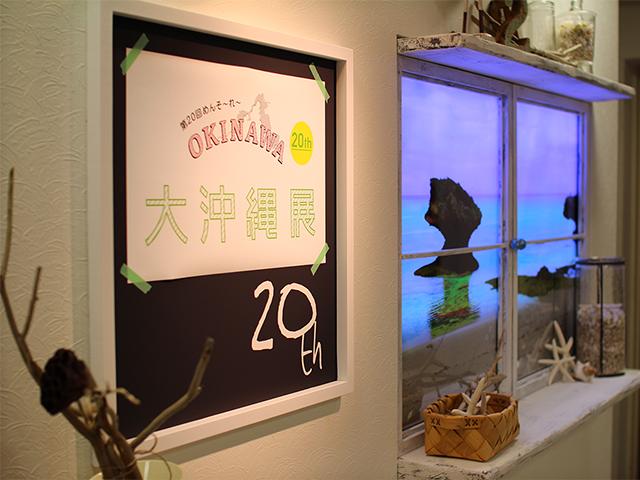 “The 20th Mensore Great Okinawa Exhibition” Is Being Held! At Isetan Shinjuku from Wednesday, July 23 to Monday, July 28, 2014 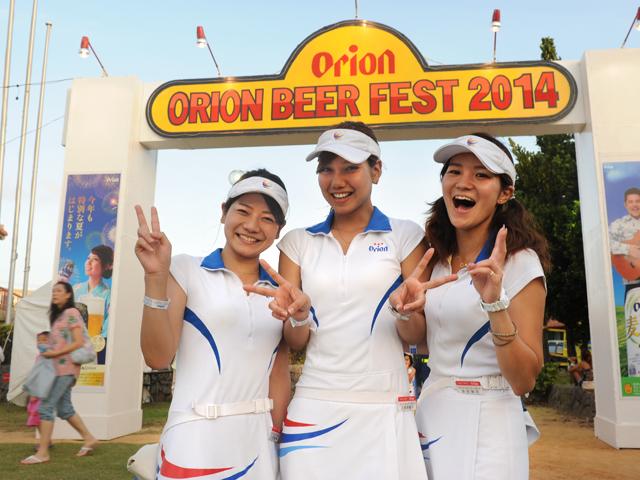 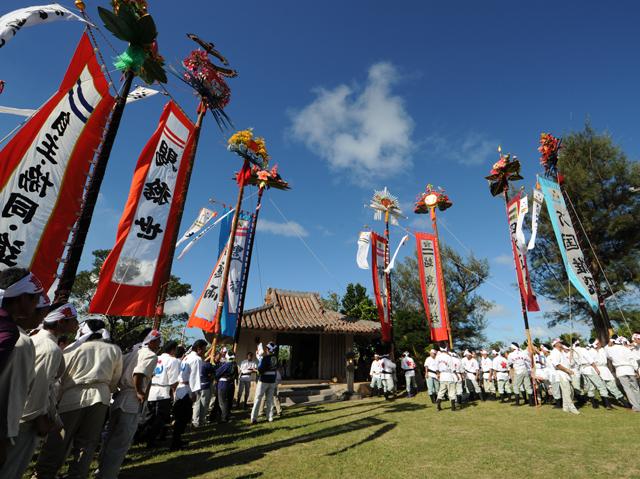 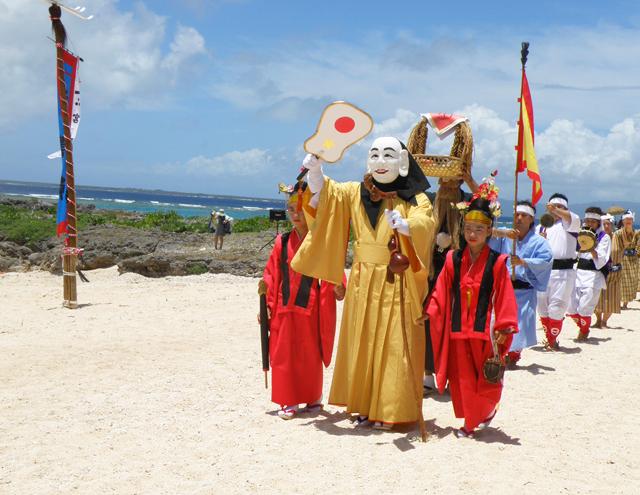